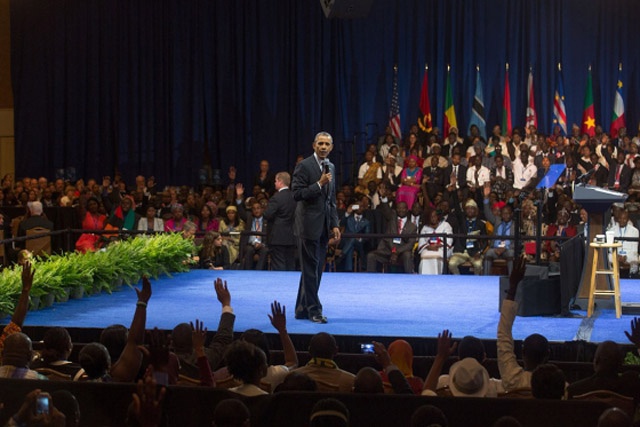 (Seychelles News Agency) - An opportunity to be equipped with more leadership skills as they take on more challenges in their respective professions – that is what the two Seychellois candidates chosen for the 2015 Mandela Washington Fellowship are aiming to achieve as they head to the US next month.

Twenty-eight year old physician, Naomie Adeline and thirty-five year old Rodney Quatre who is in charge of the Seychelles National Parks Authority's research section will be among the 500 young professionals from the African continent to embark on the six weeks study programme at top American universities, as of June 19.

This was announced last Wednesday by the US Ambassador to Seychelles Shari Villarosa, in a short ceremony at the Augerine Restaurant in Beau Vallon district in the northern region of the archipelago’s main island of Mahé.

Both Seychellois candidates have been selected under the Public Management category. Adeline will be travelling to Washington DC’s Howard University for her fellowship while Quatre will be going to Florida International University for his training.

An added boost to leadership skills

Adeline joined the Seychelles Ministry of Health as a Doctor in April 2012 following her studies and apart from her work as a general practitioner at community health centres she is also actively involved in several projects mainly to improve health education in Seychelles.

One example is a dedicated Facebook page called Health Education Seychelles where she posts tips about various health related issues where people can also inbox their questions and concerns.

For the young doctor, the opportunity to participate in the Mandela Washington Fellowship will provide an added boost to her leadership skills to pursue her ongoing projects as well as new ones she is planning to undertake in the future.

“I have a lot of future projects in mind, but a lot of them will involve other people, so the fellowship will provide me with leadership skills on how to lead a group project and to deal with issues that may arise for example if someone in the group is not doing what he/she is supposed to do,” Adeline told SNA.

Quatre whose work mainly deals with marine conservation, thought of participating in the fellowship programme since last year but at that time he was studying for his Master’s Degree in Environmental Policy from the Australian National University.

He told SNA that he is fortunate to have been successful in his application this year considering he is already 35, which is the age limit to be able to join the programme.

“Actually in my line of work I give my input on various new projects and new policy being worked…I think the fellowship will provide an opportunity for me to be equipped with more skills in terms of leadership enabling me to better deliver in my line of work and to contribute towards marine conservation in Seychelles,”

On top of the six weeks fellowship which will include visits to various institutions, training as well as an opportunity to meet with the US President Barrack Obama during a three-day presidential summit, both Seychellois candidates will stay on into the US for another six weeks as their fellowship includes an additional internship.

Almost 30,000 applicants from youths in Africa

In 2014 for the first fellowship, a total of 70 Seychellois applied, forming part of a massive group of 50,000 applicants from the continent.

In an emailed response to SNA regarding the number of applications received this year, the US Embassy's Public Affairs office in Mauritius said a total of 28,885 completed applications from across Africa were submitted online from October 7 to November 12, 2014.

"Although we cannot share the total number of applications received from Seychelles, we can confirm that half of all applicants from Seychelles made it through to the interview stage. Finalists were interviewed in person in Seychelles by an American Officer from the U.S. Embassy and a representative from Washington DC," read the statement.

"The final selection was made based on a proven record of leadership, a commitment to the community, the ability to work cooperatively in diverse groups, knowledge, interest, and professional experience in the applicant’s selected track, ability to communicate in written English and commitment to return to Africa to apply leadership skills."

The aim of the programme is to empower young African leaders further so that they can return home inspired to succeed and make a difference in their home countries.

500 young people from the African continent between the ages of 25 and 35 including three Seychellois nationals, Sheryl Vengadasamy, elected member of the Seychelles National Assembly for the ruling party 'Parti Lepep', Fatoumata Sylla, the director general for Youth Affairs in the President’s Office – both of whom were selected under the Public Management category – and a young pilot Christopher Lespoir, who forms part of the Young Innovators category went through this first learning experience last year.

Unfortunately, a fourth Seychellois candidate who was selected in the Business Entrepreneurship category, had to withdraw from the fellowship due to unforeseen circumstances.

It was during the highlight of their programme in the US, a Presidential Summit in Washington, D.C. that Obama announced the renaming the Young African Leaders Initiative (YALI), as the ‘Mandela Washington Fellowship for Young African Leaders’ in honour of the late Nelson Mandela, who passed away in December 2013.

The US president also announced that he would expand his Washington fellowship to include 1,000 young leaders on the programme each year by 2016.