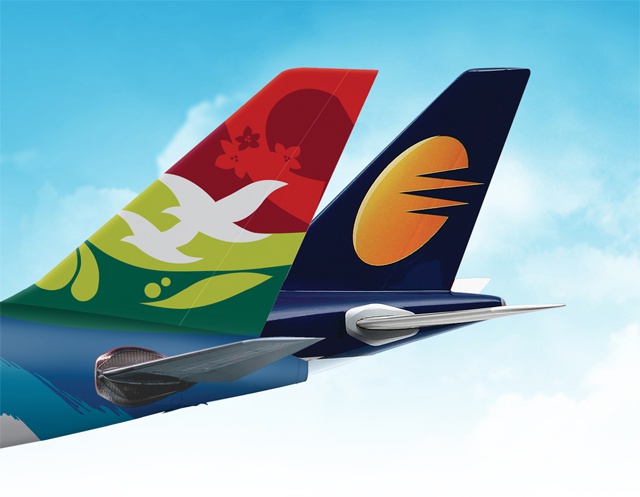 (Seychelles News Agency) - One week after Air Seychelles increased its flights to the Indian city of Mumbai to four per week, the national airline of the Indian Ocean archipelago has announced that it has entered into a codeshare agreement with one of India’s major airlines, Jet Airways.

In a press statement issued this morning, Air Seychelles said the agreement would offer travellers "enhanced connections" on the airlines’ respective networks.

“Air Seychelles will place its “HM” code on Jet Airways’ domestic services from Mumbai to Ahmedabad, Jaipur, Kochi and Thiruvananthapuram and also on Jet Airways’ international services between Abu Dhabi and Mumbai,” reads the statement.

The deal will also allow Jet Airways to place its “9W” code on Air Seychelles’ four per week flights leaving the Chatrapati Shivaji International Airport every Wednesday, Thursday, Saturday and Sunday bound for the Seychelles main island of Mahé, as well as the carrier’s flights to Abu Dhabi and Johannesburg, subject to regulatory approval.

According to the Chief executive Officer of Air Seychelles, Manoj Papa, the destination has proven to be very popular among its customers in a short space of time.

A total of 1,729 visitors from India have disembarked in Seychelles up to April 26 this year, according to figures available on the Seychelles National Bureau of Statistics Website, NBS. This represents a 108 percent increase in the number of Indian visitors when compared to the same period last year. A further 739 visitors have come to the Indian Ocean island nation from the Indian subcontinent.

“Thanks to our growing commercial ties with Jet Airways, we will be able to build our presence in India and provide Air Seychelles access to millions of potential Indian guests wishing to travel to the Seychelles, or beyond to Africa…Closer cooperation with cargo will further enable trade in the region and is in line with our business strategy,” said Papa in the statement.

Mumbai is one of five destinations served by Air Seychelles in the Indian Ocean and Africa alongside Dar Es Salaam, Johannesburg, Madagascar and Mauritius, which the airline has said are available as additional connection opportunities for guests of Jet Airways.

Codeshare to open up travel options for Jet Airways customers

Privately owned Jet Airways, which is considered India’s second major airline in terms of domestic market share, flies to a total of 73 destinations; operating flights to 22 international as well as to and from 51 destinations in India.

Jet Airways’ Chief Executive Officer, Cramer Ball, who is the former CEO of the Seychelles national airline from January 2012 to January 2014, said the codeshare agreement with Air Seychelles, reflects the company’s growing ambitions in the region.

“The agreement makes Seychelles more accessible to our guests and opens up other key destinations and multiple travel options… The Seychelles archipelago, with its 115 scenic islands, has great appeal to business and leisure travellers and we are committed to working with Air Seychelles and the Seychelles tourism industry to continue developing air connectivity,” said Ball in the statement.

Both Air Seychelles and Jet Airways have UAE's Etihad Airways as a strategic partner.

Air Seychelles, which was established in 1977 and adopted its present name in September 1978, was until 2012 wholly owned by the Seychelles government. UAE's Etihad Airways invested $45 million in Air Seychelles when it bought a 40 percent share in the airline in 2012 with the aim of turning the company around after several prior years of losses.

Etihad airways also acquired 24 percent stake in the Indian carrier, Jet Airways in November 2013, the first such investment since the Indian government allowed foreign airlines to invest in Indian carriers in September, 2012.

"...It will make Seychelles even more accessible to the growing Indian Market...Since the inaugural flight in Q4 2014, we have seen an increase in the number of Tourist Arrivals from India, which is clearly linked to direct air access," reads the SHTA statement.