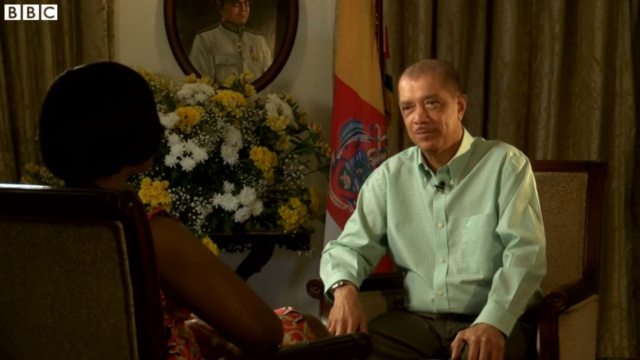 The document which was prepared by island nation’s government in collaboration with the United Nations Development Programme (UNDP) provided an update of progress in achieving the MDGs, identified the factors contributing to MDG achievement and some best practices and remaining gaps and challenges.

A report on BBC News global television aired this weekend, says that the Seychelles archipelago in the Indian Ocean is on its way to becoming the only African country to reach all eight targets of the UN’s Millennium Development Goals.

These targets adopted by the United Nations at the dawn of the millennium, include achieving universal primary education, attaining gender equality and reducing child mortality. The end of 2015 is the deadline for United Nations members to meet the targets.

In an interview on the BBC’s Africa Business Report programme, Seychelles President James Michel said achieving the MDG targets was not easy, even if the islands’ population is only 90,000.

““It is not a small challenge, small is beautiful yes, but at the same time it has many challenges…..I think it is the political will and the emphasis that you put to ensure that you give what is necessary and what is needed to your people which now in turn make it possible for you to achieve all the MDG’s,” said Michel in a conversation with Lerato Mbele, South African presenter of the Africa Business Report.

Michel, adds that since the country’s independence in 1976, the development of the country has been focused on investment in education and healthcare.

“From the very beginning, since independence, we have always put people at the centre of our development. This is why in the Seychelles we have people who are highly educated, well skilled, and this is why today here we have a system which is free healthcare for everybody, housing subsidised and we are trying our best to give every family a house, a decent house for them to live in,” he said.

The BBC business news team’s visit coincided with an international annual carnival event called ‘Carnaval International de Victoria,’ a cultural event which was also attended by the King of Ashanti from Ghana whose family has important historical ties with the Indian Ocean Islands.

The African heritage of the island nation, says Michel, is one which Seychelles "is very proud of."

When asked by Mbele how the small island nation was able to ride the wave of the 2008 global economic crisis, and an economic reform programme in partnership with the International Monetary Fund, Michel said that "the key intervention, was first of all, to liberalize the economy and bring [it] …..in line with world global environment."

Furthermore, he attributed the successful recovery of the country to the resilient islanders who were ready "to accept the change" and "took ownership of the reform."

The country of 115 islands, which relies heavily on tourism for revenue, has also diversified its main economic activities, by encouraging the growth of the Blue economy, attracting foreign direct investment and targeting new tourism markets such as China, in order to rely less on Europe, the traditional market for tourists.

Seychelles underwent an IMF-assisted economic reform programme after the country’s 2008 debt crisis when the total debt had reached 151 percent of GDP, with external public debt representing almost 95 percent of GDP (US$ 808 million). A large part of Seychelles' debt was towards its Paris Club creditors - an informal grouping of twenty industrialised nations, including France and the United Kingdom - and 40 percent of that debt was in arrears.

The island nation is aiming to bring down its debt-to-GDP ratio to 50 percent by 2018. In March this year the Seychelles finance minister confirmed that the island nation's current debt levels are now at 63 percent.

In her interview, Mbele questioned Michel about the Seychelles government’s debt management.

Michel replied that a small island state needs to import in order to meet the demand in commodities. The islands have a high reliance on foreign exchange to buy foreign imports. He also stated that Seychelles found an innovative to repay its debt.

“For the first time in the history of the Paris club having an agreement which reduces our debt and the same amount is put into a trust for climate change mitigation. So this reduces further our debt at the same time giving us the capacity to be able to have projects to mitigate climate change and also to have projects related to the environment.”

The Seychelles reached a major debt buyback agreement worth $30 million with the Paris Club group of creditors and South Africa in the French capital in February.

The debt will be transferred to a trust which will conserve the Indian Ocean archipelago of 115 islands’ ocean space. The Paris Club has also offered an additional five percent debt forgiveness on the original amount.

The International Monetary Fund has revised its projected growth for the Seychelles back up to three and a half percent for 2015, citing the appreciation of the Seychelles rupee and the recovery of the island nation’s tourism arrivals.