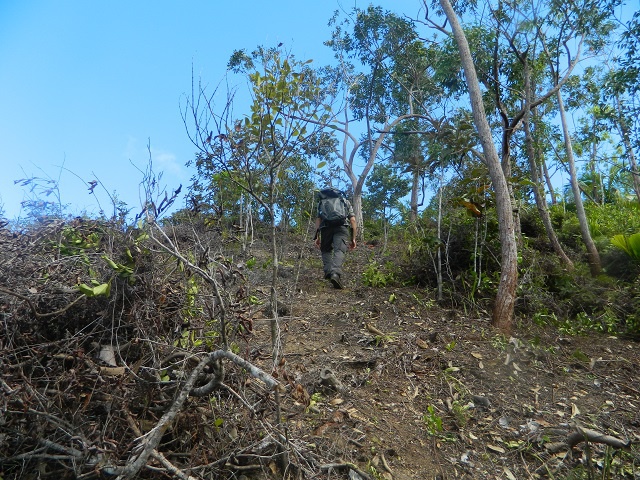 Hotspots of endemic flora of Seychelles are often found on steep sided slopes or glacis. Protecting these areas according to Plant Conservation Action group is vital to the protection of endemic species of Seychelles.(Seychelles News Agency)

(Seychelles News Agency) - The incredible greenery of the Seychelles archipelago strikes many first time visitors to the Indian Ocean islands.

A closer look however reveals that many of the species of vegetation are introduced or alien plants.

These plants such as cinnamon were introduced in early colonial days for commercial purposes but have since invaded the low-lying areas and plateaus of most granitic islands of the archipelago.

“There are only a few hot spots of endemic plants only in Seychelles and these are important areas that conserve a rich biodiversity. They are mostly located in steep-sloped areas or what are called ‘glacis’ and on the highest mountain peaks which are not easily accessible,” said Dr. Christopher Kaiser-Bunbury, a representative of the Plant Conservation Action group, in an interview with SNA.

With plant scientists and enthusiast as its members, the non-governmental organization has since 2002 been advocating for the protection of Seychelles biodiversity especially in protected areas or national parks.

Over 50 percent of the Seychelles archipelago has been declared as nature reserves or national parks and are protected under law, however, according to PCA, in spite of this status, these areas are also being threatened by invasive species, climate change and land degradation.

PCA and the Seychelles National Parks Authority (SNPA) have embarked on a massive operation for the removal of invasive plants on one of Seychelles highest glacis at the foot of Morne Blanc, the second highest mountain in Seychelles at 667m, in the central western district of Mahe, the main island of the archipelago.

It forms part of a two-year project, funded mainly by the Global Environment Fund (GEF) Small Grants Programme with support from the Government of Seychelles, UNDP and GEF Biodiversity Project with contributions from partner organizations.

Under the initial project in 2010, four sites were cleared by PCA to test the response of invaded ecosystems to restoration.

“We investigated whether pollination interactions responded to restoration positively, which would imply that the removal of invasive plants has knock-on effects on ecosystem functions,” said Kaiser-Bunbury, adding that an area of almost two hectares of land was cleared in Bernica, Salazie, Trois Freres and Tea Tavern on Mahe.

Kaiser-Bunbury pointed out that most of these areas now have naturally dispersed native seedlings and adult trees that are slowly recovering from the disturbance caused by the restoration.

With this glimmer of hope, PCA has for the past two months embarked on an intensive eradication project of alien species on one of the previously restored sites, the Tea Tavern glacis which was rehabilitated in 2011, but this time on a larger scale of more than five hectares.

“As forestry workers, we are used to maintaining of trails, but this is new to us. Not only is this educative as we are learning which plants are endemic and special to Seychelles but we are helping to protect the forest on another level,” explained Ronny Gabriel, a staff of SNPA’s forestry division.

On this particular site in the west of the island, alien plants are being cut down, cleared and their stalks are sprayed with herbicide to prevent re-sprouting.

Only a handful of staff of SNPA, have been involved in this eradication project which has left the steep sloped area overlooking Port Glaud bared of thousands of plants and temporarily exposed.

“….Any manipulation of a site may also impact negatively on the native because you always take out a lot of the vegetation, the micro-climate changes, the humidity changes and you see they suffer initially. We observed that when the rain sets in they will recover from the stress they are exposed to at the moment,” says Kaiser-Bunbury.

A little bit of rainfall in the area also means that re-sprouting takes place especially amongst plants such as cinnamon and ‘prin de frans’ also known as chrysobalanus icaco, two of the most invasive species in the archipelago, but the team is undeterred by these risks.

“Considering the amount of plants we have removed, we are not worried when we see some re-sprouts….but as we go along we have mastered the technique and less are growing back,” Terence Valentin, another forestry officer told SNA, adding that after the project ends they hope to pass on the knowledge gathered in this operation to other staff in the public sector organisation.

With almost half the work done, PCA is now starting to focus its efforts on getting the community to be actively involved in the project.

“We want to create a nursery for endemic plants in Port Glaud so that each family can take charge of their own plants and whenever we have enough plants and in good season we bring them to the glacis to remove newly-sprouting invasive and re-plant other endemic trees,” said Kaiser-Bunbury.

According to the PCA website, Seychelles has probably more than 1000 introduced exotic (alien) species. There are thought to be about 850 species of flowering plants in Seychelles, of which, 250 species are indigenous including 75 endemic species.

“We know from studies done in Mauritius that restoration is successful in the long-term if you maintain it initially every 3-6 months and then reduce the frequency of maintenance to every 1-2 years. With such a strategy the native plant community will regain its strength and resilience, and native vegetation will bounce back strongly,” concludes Kaiser-Bunbury.

He also noted that without the input of the general population, here Port Glaud community, and an active eradication project, this technique would not work in Seychelles.