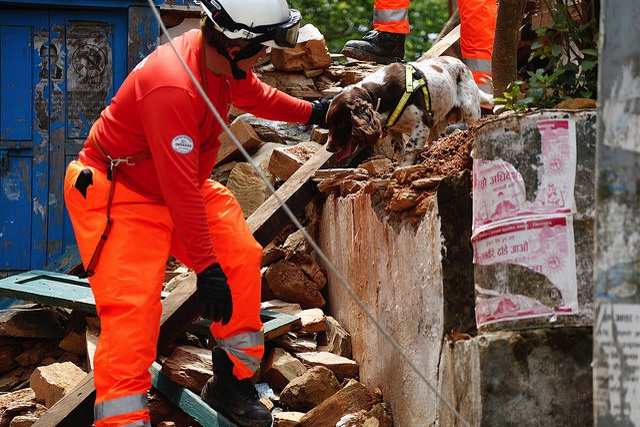 (Seychelles News Agency) - Seychelles is joining global efforts to assist people in Nepal in the wake of the 7.8 magnitude earthquake that ripped through the mountainous Himalayan region on April 25.

With a little over 400 Nepalese working in Seychelles, local organisations have started to mobilise to contribute toward international assistance required to aid thousands of people that have been affected by the tragedy.

The Lions Club Paradise Seychelles, consisting mainly of businessmen of Indian origin as well as doctors and other professionals working in Seychelles, has been the first to come forward with a little over $1,800 raised by its members.

The club is part of an international charity network - Lions Clubs International.

Presenting the money to the Seychelles Minister for Foreign Affairs and Transport, Joel Morgan, on Wednesday, Pillay expressed hope that his organisation had "set the wheels in motion and set a precedent for others to follow."

Among the 400 plus Nepalese working in Seychelles including in the hospitality sector, 145 of them are also employed as security personnel by the island nation’s prison and police forces.

Five of them, three prison security personnel and two police officers present at the presentation ceremony at the Ministry of Foreign Affairs on Wednesday, noted that some of their colleagues had been directly affected by the disaster.

Dipak Sharma Tireari, who works as a police officer said “though the families of those present were safe, most of their houses and other properties had sustained extensive damage.”

The 400 plus Nepalese nationals working in the Indian island nations have also been receiving help to stay in contact with families and loved ones while those who have been directly affected by the disaster.

According to an article published in daily newspaper Seychelles Nation, on Thursday, one of the local telecommunications company, Cable and Wireless Seychelles has offered two weeks of free calls to them.

The Seychelles Minister for Home Affairs, Charles Bastienne told SNA that discussions is still ongoing, where information as to what extent the property of the Nepalese prison security and police officers have been affected back home before making a decision to allow some of them to go home for a certain period of time.

The prison services indicatednoted last week that it cannot allow all those who have requested to return to Nepal at the same time as this could lead to a human resource and security problem at the country's prisons.

“Nepal can continue to count on the solidarity and prayers of the people and Government of Seychelles for its long-term recovery from this catastrophic event,” said the Minister for Foreign Affairs and Transport, Joel Morgan.

MFA’s Press Attaché, André Butler-Payette told SNA, that as the facilitator, the Ministry of Foreign Affairs is forwarding all donations to Nepal through diplomatic channels.

One of the international organisations involved in the relief efforts, the International Federation of the Red Cross, has launched a preliminary appeal for $34.9 million dollars and has called on Red Cross and Red Crescent Societies worldwide to join this endeavour.

The Red Cross Society of Seychelles is also starting to get involved to raise money to contribute to that sum, a bank account to that effect has been opened for anyone who wants to contribute while red cross officials will also be physically collecting donations from the public on Friday.

The organisation’s Dissemination, communication, Resource Mobilization Coordinator, Linda Gerry told SNA that raising money is the easiest means identified by the International Federation of the Red Cross for aid to reach the Nepalese victims.