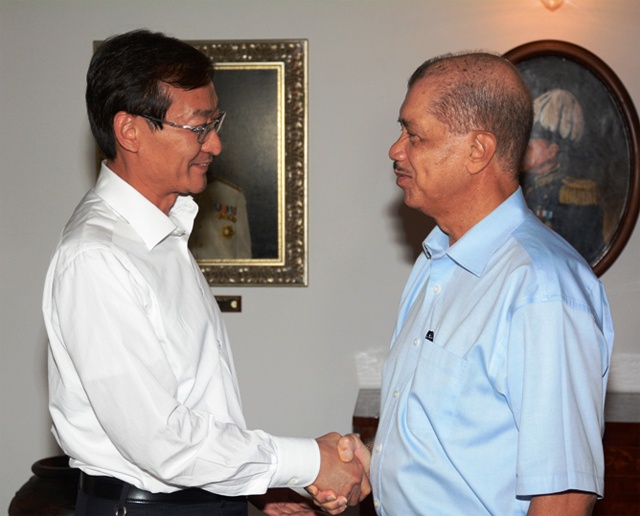 (Seychelles News Agency) - Further promoting the friendship and cooperation which exist between Seychelles and China – that is the main aim of the Chinese Vice Foreign Minister’s visit to the Indian Ocean island nation.

Zhang Ming said this in a press interview at State House, in the Seychelles capital of Victoria on Friday, highlighting that he has come to Seychelles to “launch the political consultation between our two foreign ministries.”

Seychelles and China will mark 40 years since they established diplomatic relations, in June 1976, although ties between the two countries date way earlier.

Today, Seychellois of Chinese origin forms part of a large community, and are represented in all sectors of society.

Over the years, Seychelles and China have developed cooperation in various fields namely tourism, health, education maritime security amongst others.

“We have maintained close communication and coordination of global important issues such as the development of small island states, the post 2015 development agenda, climate change and UN Security Council reform and this time the political consultation will allow us to have discussion on the global and regional issues of common interests."

In a press statement issued Friday evening, State House said their discussions centred on issues of common interest where the two sides can increase bilateral collaboration.

Trade, investment, renewable energy, people-to-people contacts, tourism and the fight against piracy, the Blue Economy concept, climate change issues, were among some of the topics highlighted.

Michel also thanked China for the support provided to the Indian Ocean archipelago as well as for the interest in the African continent.

“Our partnership with China is crucial for the achievement of our economic prosperity that is required for Africa to emerge as a strong continent," said Michel in the State House statement.

“The Seychelles are African islands, so we want to benefit from the developments and projects that are taking place on the African continent...”

The Chinese Vice Foreign Minister’s stop in Seychelles is part of his tour of several African countries.

The visit comes two weeks after the Vice President of Seychelles, Danny Faure, held discussions with his Chinese counterpart, Vice President Li Yuanchao during his trip to the Far East.