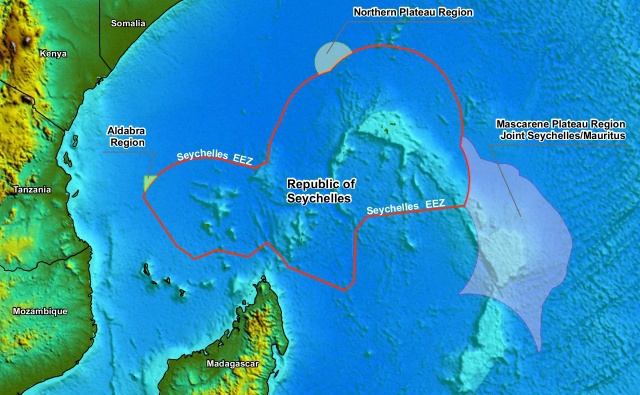 The Mascarene Plateau, situated to the south-east of the Seychelles Exclusive Economic Zone, is jointly managed by Seychelles and Mauritius, and the Northern Plateau Region to the west, a claim submitted by Seychelles to the UN. The Aldabra Region is being proposed for shared management between Tanzania and Seychelles. (Seychelles News Agency)

(Seychelles News Agency) - The establishment of an administrative and legal body for the Mascarene Plateau region, jointly shared by the Indian Ocean islands of Seychelles and Mauritius, was one of the key issues highlighted during the 6th meeting of the Joint Commission between the two island nations, held in the Seychelles capital of Victoria on Friday last week.

The Mascarene Plateau is a large shallow area ranging in depth from 8 to 150 metres in the Indian Ocean, situated to the north and east of Madagascar. The shelf extends approximately 2, 000 km, from the Seychelles in the north to Réunion in the south and covers an area of over 115,000 square kilometres.

The Joint Commission meeting followed the 10th technical committee meeting between delegates from the two sides held over two days.

Once it has been set up, the body will make up the three-tiered structure for the management of the joint area alongside the Joint Commission and the Ministerial Council.

The setting up of the institutional framework is also one of the five main strategic objectives found in a three-year strategic plan which was endorsed at the end of the meeting.

The Mascarene Plateau region is an extended continental shelf of around 396,000 sq km, for which Seychelles and Mauritius made a proposition to the United Nations for its shared management in March 2009.

The agreement provides for cooperation between the two coastal states in matters of environmental protection, exploration and marine resources management, including fisheries and hydrocarbons.

The two sides had already agreed in previous meetings to share the resources in the zone on a 50/50 basis.

Highlighting the importance of having the authority with a legal personality, Raymond Chang Tave, the chairman of Seychelles’ Maritime Boundary Delimitation Committee, who is also the Special Advisor to the Minister for Land Use and Housing, told SNA that there are already companies expressing interest for exploration in the Mascarene Plateau region, thus the need to have an office to process applications that will be received.

“Now that this has been tabled, there needs to be discussions on the part of both sides which will need to focus on seeking a budget for the day to day running of the authority, the legal aspect where the respective countries’ laws need to be harmonised so that the authority can operate," said Chang Tave, who was leading the Seychelles delegation at the Joint Commission meeting.

All these issues will be brought back to the table during the next Joint Commission meeting, which is scheduled to take place in Mauritius at the end of July this year, and whatever is agreed upon will be given the final approval at the Ministerial Council Meeting which Seychelles is expected to host later this year, according to Chang Tave, most likely in the last quarter of 2015.

It is during that meeting that the strategic plan which Seychelles and Mauritius have endorsed will be published in detail.

The plan also includes a promotional aspect to make the extended continental shelf of around 396,000 sq km, jointly managed by Seychelles and Mauritius, an attractive location for investment.

In that sense, a competition for the design of an official logo is also expected to be opened to citizens of Seychelles and Mauritius, aged between 15 and 25 years, with cash prizes of $2,000 and $1,000 being offered, but details of the competition are still being finalised.

Discussions on the continental shelf of the Mascarene Plateau, started in April 2002 when delegations of both island states, started to talk about the delimitation of the Extended Continental Shelf boundary.

Following the joint formal presentation to the United Nations on the limits of the Continental Shelf in March 2009 and subsequent dialogue during 2010 and 2011.

The UN adopted the submission in March 2011 and it was in March 2012 that Seychelles President James Michel and the Mauritian Prime Minister Navin Ramgoolam signed treaties for the management of the area during the state visit of Michel to Mauritius.

As such, both island states now have jurisdiction over an area of 396,000 of Continental Shelf located in the Mascarene Plateau.

The accord was hailed as historical as it was the first time two countries agreed to jointly manage economic resources under the United Nations law of the sea convention that came into being in 1982.

Based on the same model, Seychelles is in negotiations with Tanzania over an area of extended continental shelf near the Aldabra region of the Indian Ocean that would be the subject of a joint submission for shared management to the United Nations.

The proposed area is 200 nautical miles beyond Seychelles' baselines on Aldabra island.

One of the Seychelles islands and a UNESCO World Heritage since 1982, Aldabra is the second largest coral atoll in the world, boasting a wide range of unique flora and fauna, and a home to the world’s largest population of giant tortoises, where up to 150,000 of the herbivorous creatures live in isolation.

There are more tortoises than there are human residents in the entire Seychelles archipelago, which have a total population of 90,000 inhabitants.