"The journey has been life-changing": Miss Seychelles 2015 contestant Angie Arnephy 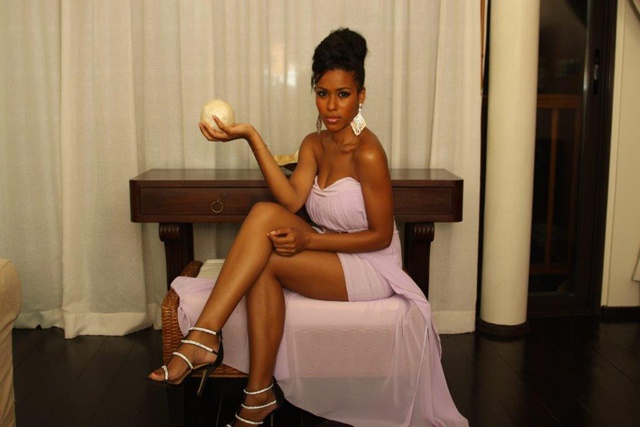 (Seychelles News Agency) - On Saturday May 30, Miss Seychelles…Another World 2014 Camila Estico will hand over her crown to a new beauty queen at the end of her one-year reign.

This will be during the crowning night of Miss Seychelles…Another World 2015 at the Ephelia Constance Resort at Port Launay in the westernmost part of the main Seychelles island of Mahé.

This year’s winner will be chosen among 13 contestants to represent the island nation at the 65th Miss World Pageant later this year.

All 13 young ladies have been actively preparing for pageant night where they are being coached and trained by the Seychelles Tourism Board (STB), which organises the pageant.

SNA will give its readers the chance to know more about the 13 contestants as of today.

Eighteen-year-old Angie Arnephie, who was encouraged to enter by some friends of the family, says the thought of participating in the beauty pageant had never crossed her mind.

While she did not know that being one of the Miss Seychelles…Another World contestants would require a lot of effort and hard work, Angie, who is presently working part-time as a sales assistant, feels that she is coping well with all the training and coaching to get ready for pageant night.

“I did not realise that the competition was going to be that serious or demanding but I’m enjoying it because it has built my self-confidence and I’ve made a lot of new friends,” she told SNA in an interview.

Hailing from Anse Boileau in the western part of the Seychelles' main island of Mahé, Angie spent most of her early school years up to secondary at Independent School, one of the private institutions offering primary and secondary schooling in Seychelles.

The 1.62 metre tall young lady, who has completed her studies at the School of Advanced Studies at Anse Royale, will as of September this year be embarking on another educational path as she joins the University of Seychelles to study for a degree in Business Administration.

When asked about her career plans, Angie who is aiming to go for a Master’s degree after her undergraduate studies told SNA that she aspires to become a successful businesswoman.

“I am not sure about which industry I want to work in, but I know I will discover more about my career path throughout my studies.”

While she is set on studying hard to obtain a good career Angie also puts herself across as a family-oriented person.

“In 10 years’ time I see myself married with at least one child, and caring for many animals. I want to be able to earn a good salary so that I can take care of my family,” She admitted confidently.

Caring about cruelty to animals

Caring for animals is not just something she wants to do when she has her own little family; for her beauty with a purpose project, Angie has chosen to initiate a campaign against cruelty to animals and is currently working with the Seychelles Society for the Prevention of Cruelty to Animals, SSPCA.

“So far we plan on organising exhibitions, as well as giving talks in primary schools to promote awareness on the issue,” Angie told SNA while explaining that many people might not be aware that they are harming their pets.

“I want to be the voice that animals don’t have, and also encourage people to adopt dogs instead of spending a lot of money to buy dogs,” she explained.

Angie, who describes herself as down-to-earth and friendly, says her philosophy in life is to respect the views and opinions of others and she also wishes that people would be more loving towards one another.

Having a passion for singing, the young Miss Seychelles contestant has been spending long hours in the studio recently, perfecting her new song 'Zis Nou Ki Deside’ [only we will decide], which she performed in the Miss Seychelles talent show contest.

Other than singing, Angie also loves going to the beach, doing a bit of sport particularly playing volleyball and cooking all kinds of food.

While she enjoys a good movie preferably Titanic and the soothing melodies of love songs performed by artists such as Christina Aguilera, Sia and Celine Dion she also enjoys a good book with her favourite being Maya Angelou’s ‘I Know Why the Caged Bird Sings’.

When it comes to fashion Angie is more into choosing clothes she feels look good on her.

“I don’t go for what everyone else is wearing or an expensive brand name. I like to stay true to my own unique style,” she told SNA.

Although she is not too keen about a boat trip or even a plane ride Angie says she would very much like to travel the world as long as she is accompanied.

The 18-year old who has grown up without any siblings says she sometimes feel lonely and she describes her mother as being her role model. Angie is the daughter of Doreen Arnephy, the Director General for Public Affairs in the office of the Seychelles President and her dad, Bernard Arnephy, is a Member of the National Assembly for the ruling party 'Parti Lepep'.

As she gears up for pageant night on May 30 Angie says her participation in this year’s Miss Seychelles…Another World beauty pageant is one of her life’s experience that she will always cherish.

“I have never been in the spotlight in front of the whole country before. Although there are 12 other contestants and in two weeks' time a winner will be crowned, the journey itself has been life changing.”