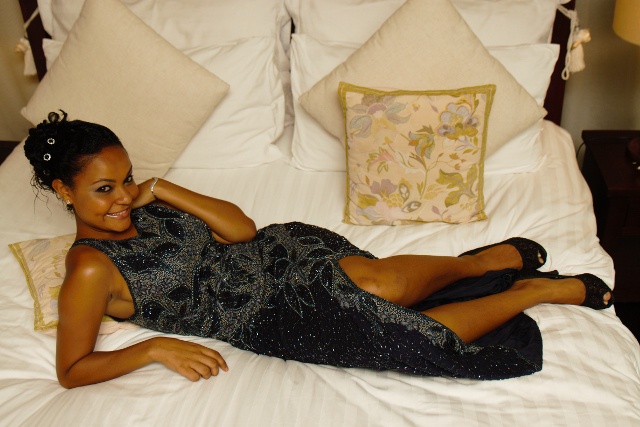 (Seychelles News Agency) - “It’s been a long-time dream which I never thought I could achieve, but with my mother, friends and work colleagues backing me up I have decided to take on the challenge.”

This is how Stasia Lafortune describes her participation in the 2015 Miss Seychelles...Another World beauty pageant.

As the only contestant who is not from the main Seychelles island of Mahé, Stasia sees herself as the representative of all the other main populated islands of the Indian Ocean archipelago in the pageant.

Hailing from the Baie St Anne district on Seychelles second most populated island of Praslin, the 20 year old works as a receptionist at ‘Le Duc de Praslin Hotel’ – a job she has held since her graduation after studying front office at the Seychelles Tourism Academy.

“I have always wanted to work with visitors to our shore helping them to plan their holiday as well as to promote my country – that is why I wanted to work in the tourism industry,” Stasia told SNA in an interview, adding that she wants to progress on becoming a front office manager.

Moving to the main island to achieve her dream

Taking part in this year’s Miss Seychelles has not been an easy ride for Stasia as she had to move to Mahé to undertake the required training and coaching programme led by the Seychelles Tourism Board.

“When I first started I thought about quitting because I feared not being able to cope with the pressure of being in the pageant and working at the same time. Thankfully my employer was very understanding and granted me sabbatical leave for three months,” she said.

Stasia is also fortunate that her mother, who is of Tanzanian origin, has moved with her to Mahé for the three months and she also gets to go back to Praslin every weekend where she works on her community upliftment project.

Each contestant has to come up with a project proposal to benefit the local community, in line with the Miss World pageant’s objective of seeking ‘beauty with a purpose’.

Stasia who says she enjoys reading, especially the Nancy Drew Mystery Series, has decided to embark on a quest to promote the habit in the schools.

“Nowadays so many young people cannot spell or write properly because they use a lot of abbreviations and shorthand hence miss out on accurate spelling when it comes to the exams.”

So far, she has been working with a number of sponsors donating books, book marks, leaflets and posters mainly to her former secondary school on Praslin.

Pageantry is certainly not new to the 1.70 metre tall girl with a broad smile as she participated in the ‘Pti Prenses’ [Little Princess] beauty pageant on Praslin at the young age of 10 where she won a prize for best evening gown.

Stasia’s other attributes include her sporty character where she has won several medals in sprinting events and high jump during her school days.

While Seychelles has three national languages, being English, French in addition to the native language of the islands, Creole, many of the archipelago's inhabitants speak other languages for either having studied in foreign countries or having parental links to other countries.

That is the case for Stasia who speaks fluent Swahili, a language which is spoken in much of east Africa.

“I was born in Seychelles of a Tanzanian mother and Seychellois father. We moved to Tanzania until I was two years old and then came back to Seychelles,” she explained to SNA.

“My mother speaks very little Creole so at home I speak Swahili to her and with my dad I speak Creole.”

In spite of her generally upbeat and lively character, Stasia shared one of her life’s most painful experience to SNA which she says despite the hurt has taught her many things especially how to remain positive no matter what life throws at you.

“I lost my little brother when he was three years old. The worst part about it is that everyone would pity me and I didn’t like that so much. The experience - despite being painful - has actually taught me to be stronger and brave."

Stasia has two other brothers and a sister.

We are all winners

Less than two weeks before pageant night which will see one of this year’s 13 Miss Seychelles contestants walk home with the prestigious crown and be the country’s representative at the 65th Miss World beauty pageant later this year, Stasia says she is ready adding that through the training received she has learnt to deal with her stage fright and feels more confident.

“I would like to encourage other girls who would like to take part in the Miss Seychelles beauty pageant not to be shy. When you be yourself and you are open to others, everything else become effortless.”

When asked about her expectations on pageant night, Stasia concluded that “I think I will do well and even though I do not win I sincerely feel we are all winners in our own way.”