Football: Seychelles out of COSAFA Cup quarterfinals race after narrow loss against Zimbabwe 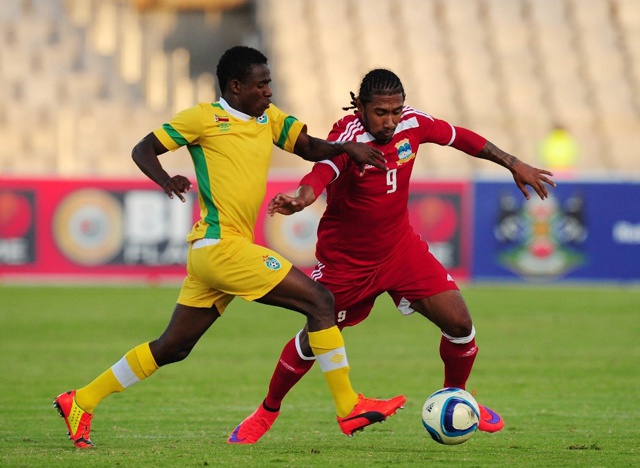 Seychelles Gervais Waye-Hive battling for the ball against a Zimbabwean player during the 2015 Cosafa Cup match between Seychelles and Zimbabwe at the Moruleng Stadium, Rustenburg on May 19. (Muzi Ntombela,BackpagePix)

(Seychelles News Agency) - Seychelles could not get past Zimbabwe in their second group match at the 2015 Council of Southern Africa Football Associations (COSAFA) Cup in South Africa played on Tuesday.

The archipelago’s national football team suffered a 1-0 loss, with Zimbabwe scoring the only goal of the match in the 53rd minute.

Seychelles had gone into the match with a boost of confidence after managing a goalless draw against Namibia on Sunday.

Speaking to SNA in a phone interview from South Africa this morning, the interim Head Coach of the Seychelles national football team, Ulrich Mathiot, said the team remains positive in spite of losing yesterday’s match and missing out on the opportunity to stand a chance to qualify for the quarterfinals.

He described the players’ performance as very encouraging considering they had played two intense games in a span of 48 hours, something he says they are not used to.

“We had the first chance to score in the match against Zimbabwe, but that did not happen. Nevertheless we are not disappointed because when you look at the statistics compared to our last participation in the COSAFA competition at the end of two games we had conceded eight goals and this year after two matches we have conceded only one goal, so in a sense we have made some improvements,” said Mathiot.

Commenting on the fact that the team had taken a rather defensive approach for both games played so far Mathiot responded that Seychelles had gone into the games knowing that Namibia and Zimbabwe were more superior opponents and had the strategy not been used he says the team could have conceded more goals.

“We do not stand a chance at reaching the quarterfinals, but we will still go all out in the last match against Mauritius on Thursday. Seychelles vs Mauritius is more a question of pride and this is the determination we are going out with tomorrow,” Mathiot concluded.

The island nation has been drawn in Group A alongside Namibia, Zimbabwe and the neighbouring Indian Ocean island of Mauritius.

In the other group A match played on Tuesday, Namibia managed a 2-0 win against the Indian Ocean island of Mauritius.

This means that Seychelles now with a third place standing in Group A and Mauritius standing in fourth place are both out of the competition to reach the quarterfinals of the COSAFA cup.

The race is now between Zimbabwe and Namibia. The two teams will clash on Thursday in the final group A matches which will also see Seychelles play against Mauritius before heading home.

With two wins already under their belts, the Zimbabwean team only need a draw to move on to the quarterfinals while Namibia must win the match, having achieved only one win and a draw in previous matches.

In Group B, which is comprised of Lesotho, Madagascar, Swaziland and Tanzania (a guest nation in this year’s COSAFA cup) the competition for the top spot is still tight.

In matches played on Monday Swaziland defeated Tanzania while Madagascar won against Lesotho.

Group B matches resume today and will see Tanzania play against Madagascar while Lesotho will clash against Swaziland.

The COSAFA competition, which is seeing the participation of 14 teams this year, will be played until May 30.

The group stage of the competition is seeing the eight lower ranked teams according to the FIFA rankings compete to stand a chance of coming on top to be able to advance to the quarterfinals.

Apart from Zambia and Ghana, the quarterfinal stage will also include Mozambique, Malawi, South Africa and Botswana.

Ghana and Tanzania are guests nations in this year’s COSAFA Cup to replace Angola and the Comoros, who are not participating.

For the Seychelles national football team, the COSAFA competition is also preparation for the players who will have to play another two international competitions before they head to the Indian Ocean island of Reunion in August for the Indian Ocean Island Games.

In June, Seychelles will meet Algeria in the first leg of the 2017 Africa Cup of Nations (Afcon) qualifiers, and the team will also have to compete in the 2016 African Nations Championship (Chan) qualifiers.