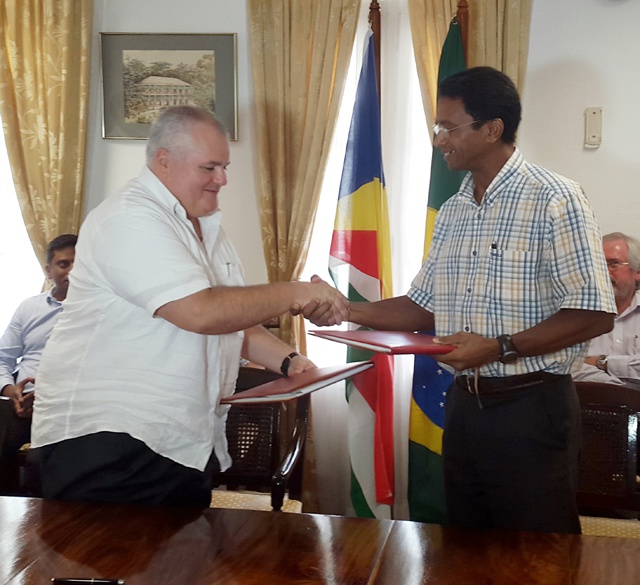 (Seychelles News Agency) - The Indian Ocean archipelago of Seychelles has set its sights on growing its tourism market all the way across the globe to the South American continent as it on Tuesday signed a bilateral air services agreement with Brazil.

This was after Luz who has been based in Tanzania throughout his tenure, paid a final courtesy call on the President of Seychelles, James Michel, at State House in the Seychelles capital of Victoria.

The agreement is expected to establish a bilateral framework to allow for commercial cooperation in civil aviation between the two nations.

According to a press statement released today by the Ministry of Foreign Affairs and Transport, the agreement will allow each country’s respective airlines to engage liberally in areas such as codeshare partnerships, and to use leased aircraft for fleet management.

“Fourteen million Brazilians travel abroad annually, of those only approximately one thousand visit the Seychelles,” said Ambassador Luz at the signing ceremony. “It is my fervent hope that this agreement will give the right impetus to ensure that a greater number visit the shores of Seychelles.”

Secretary of State Faure commented that the current air transport policy of Seychelles was directed towards ensuring that the archipelago continues to attract a wider variety of visitors.

Earlier, during his visit to State House, President Michel and Ambassador Luz discussed the air services agreement as well as other areas of interest, including tourism and oil and gas exploration.

According to a press statement issued by State House on Tuesday, President Michel expressed his appreciation for the work done by Ambassador Luz during his time in office to improve the cooperation between Seychelles and Brazil.

Luz will be re-posted to the Middle Eastern kingdom of Jordan next month.

The Seychellois Head of State assured Luz that he would provide continued support to his successor.

Speaking to the local press after the meeting, the outgoing Brazilian Ambassador described relations between Seychelles and Brazil as ‘good and friendly’.

“The level of cooperation between Seychelles and Brazil is very good but it could be better. Unfortunately Seychelles is being treated as a high-ranked country, so it does not benefit from most of our cooperation,” he said.

Adding that Brazil tried to agree to bilateral cooperation as often as possible, including a military cooperation programme on maritime security that has just commenced, as well as the appointment of a Brazilian military observer to the African Union who came to Seychelles for a meeting in January.

Ambassador Luz also made mention of an upcoming education cooperation agreement, which is awaiting ratification from the President of the Brazilian Senate.

“It will allow Seychellois to study, especially the graduates and postgraduates studies, in Brazil,” he said.

“The Brazilian State Oil Company has a long-term agreement with Seypec [the Seychelles Petroleum Company], and for the last three years one of your tankers – the ‘Seychelles Patriot’ – has a contract with the Brazilian oil company,” the ambassador added.

In October last year, the Seychelles Patriot ran aground during a routine journey up the Amazon River in Brazil, but was re-floated nine days later after a challenging salvage operation.