A voice for those who cannot hear: Seychelles contestant clinches third prize at Miss Deaf Africa 2015 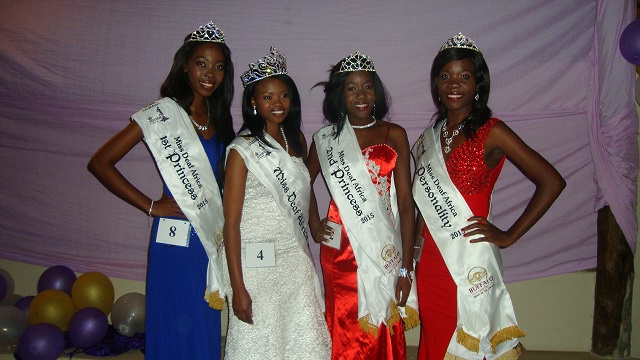 (Seychelles News Agency) - Seychelles’ contestant at this year’s Miss Deaf Africa clinched the 2nd Princess title at the end of the pageant held from May 4 to 9 in Hectospruit. in South Africa’s province of Mpumalanga.

Eighteen-year-old Melita Gilbert who hails from the Seychelles second most populated island of Praslin took part in the contest alongside contestants from other African countries namely Lesotho, Botswana, Namibia, Mozambique, Seychelles, South Africa and Zambia.

The pageant which had original been scheduled for September 2014 in Swaziland before being postponed to May this year saw Lesotho’s Tlhokomelo Sabole take home the prestigious Miss Deaf Africa title.

South Africa’s Lefa Manamela was crowned 1st princess while the Miss Personality title was awarded to Kenewang Nfila from Botswana.

Speaking through her interpreter Anita Gardner ,who is also the Chairperson of the Association of People with Hearing Impairment (APHI) in Seychelles, in an interview with SNA, Gilbert shared the experiences and excitement she felt during her recent trip to South Africa.

“I felt so happy to have won the second princess title,” she said noting that she had spotted a few girls she thought would win the event ahead of her including her newly found friend from Botswana.

“The only thing that surprised me was during question time...I was shocked when I saw all the other girls answering in writing while I do not know how to write….I attended school for people with disabilities and I did not learn how to write back then” she added.

But Gilbert defied all odds and answered her own question through sign language and managed to impress the jury enough to win the pageant’s third place. The contest also included the modelling and dancing component or the showcasing of other talents.

APHI’s chairperson Anita Gardner who was accompanying Gilbert to South Africa was the one who interpreted her answer to the judge’s question.

Gardner told SNA that her role in the organisation of Miss Deaf Africa is, in fact, to work with the contestants from every participating countries to help with communications in sign language.

“It is not easy because each country has its own sign language and you have to get to know the girls and learn a little bit about how they communicate and try to find a common ground.”

Highlighting the potential of girls with hearing impairment in Africa

The first Miss Africa was held in 2012. This is an initiative of Maria Sivertsen, who has been teaching deaf people for over twenty years with the aim of highlight the potential of young deaf women across in Africa.

Gardner told SNA that compared to other participating countries, Seychelles does not have an annual pageant in order to field a contestant to the continental pageant but that they are instead chosen based on interest shown to take part.

“We have not organised a pageant since we first did in 2009 because we do not have enough girls…Every year we advertise and we look at girls who have the quality, the ability, to be able to participate. This year we had two but one is still at the University and we thought it's best that she continues with her studies and can participate next year.”

Coming out of her shell

All does not stop here for the young beauty queen as she now has to prepare for the upcoming Miss Deaf World 2015, to be held in Prague from July 13 this year.

As of next week, preparations will be starting on a new choreography and new wardrobe for the contest.

“It is not that different from other beauty pageants except for communicating where we use sign language…if not everything else is the same, they are coached to catwalk …..Each pageant has their own criteria Miss Deaf Africa does not allow the contestants to parade in swimwear, but they do have photo sessions in their swimwear which is judged by the jury”

During the interview with SNA, Gilbert stressed on the desire to see equal of opportunities given to people with hearing impairment and along that line she noted that she will form part of the delegation participating in the upcoming Indian Ocean Island Games to be held in Reunion island in August this year, where she will feature in the long jump category.

Gilbert’s mother, Rosie Rabat, who SNA met at her house at Cap Samy in the district of Baie Ste Anne on Praslin explained that she discovered that her daughter could not hear when she was only one-year-old.

“…From then on we only invented our own signs to communicate with her…,” said Rabat.

“When she decided to leave school at the age of 14, I did not object because she helped out at home….when she started to meet with other deaf people I was not happy but I encouraged her…she has changed so much,” added the mother of seven children.

Gilbert is her fourth child and she explained that since the age of three to thirteen years, she followed normal classes in school with other children in Baie Ste Anne primary school, one of the two districts on the island.

She said she is amazed to see what her daughter has achieved so far, including her ambitions to enrol on a training pedicure and manicure training course.

Nevertheless, she misses Gilbert who spends quite a lot of time on the main island of Mahé to work on her different projects.

“I’m used to having her around the house…helping out. But I see she is more confident now even with her sign language...sadly I am not used to it and cannot communicate back doing the same, but I hope she continues to do well and stays active.

In 2010, it was estimated that there are about 600 people with hearing impairment among the Seychellois population of around 90,000 people.

The Association of people with Hearing Impairment was set up in 2005 by its current chairman Anita Gardner who developed the passion while visiting a friend in Namibia who taught people with hearing impairment.

Gardner says a lot has been done to improve the lives of this group of people and allowing them to develop in all areas of life but adds that more still need to be done.

“We were supposed to finish developing the sign language used in Seychelles this year…but we are hoping that next year, we will validate all signs and then the last stage will be to produce a dictionary,” says Gardner.

A special class located at the Au Cap primary school on the eastern coast of the main Seychelles island of Mahé has also been functioning since 2010 where teachers and interpreters have been trained to use sign language to teach students with hearing impairment to read and write.