May Celtel celebrates 100th birthday in Florida, nearly 14,800 km away from island home of Seychelles 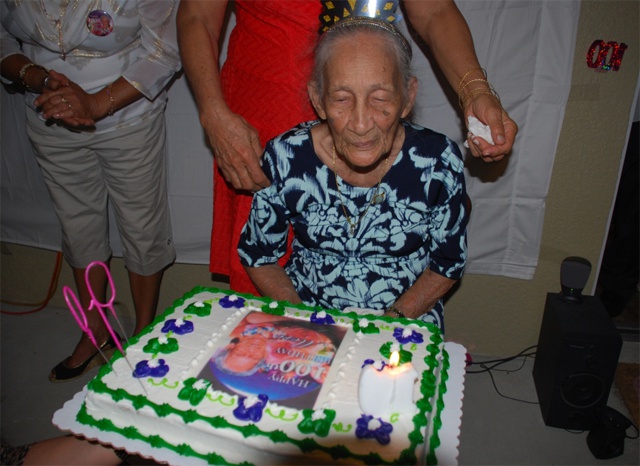 May Celtel blowing out her 100th birthday candle. (Nelly Coelho)

(Seychelles News Agency) - On Sunday May 3 this year a celebration was held in the Southeastern US state of Florida which gathered all the children and other family members of May Celtel coming from Seychelles, Canada and the US, as she celebrated her 100th birthday.

What is also special about this celebration is that although she lives thousands of kilometres away, approximately 14,800 kilometres, the joy of Celtel’s birthday was also felt by her relatives living in the tiny Indian Ocean archipelago of Seychelles.

May Celtel born Vel was born in Mombasa Kenya on May 3, 1915 to Seychellois parents. Her father was working at the Mombasa post office at the time.

Responding to SNA in an email Celtel’s grand-daughter Nelly Coelho, said her grandmother moved to Seychelles during her teenage years where she married Seychellois William Celtel, who was to be a boat captain on the 'Revenant' formerly 'Wanetta.'

“..They were promised to each other when she was 15 years of age,” Coelho told SNA.

“Her husband passed away many years ago and she has been a widow.”

After having lived for many years at Les Mamelles, a district on the eastern coast of the Seychelles main island of Mahé, May Celtel moved to Florida around six years ago to be taken care of by her daughters who live there.

“She is very healthy apart from a few hip joint pains. She still eats, drinks, talks, and puts herself to bed with a little hearing problem. She chooses to hear who she would like to hear. Her eyesight is not excellent, but she is able to read and watch TV. She loves her little whiskey at 5pm every day – calls it “happy hour,” Coelho told SNA responding to a question about her health.

“One of her favorite pastimes is crochet and “scratch cards” (lottery cards). Give her a chance and she has cash on her and if one can take her to the casino, she can spend the whole day on the slots.”

The centenarian has had 7 children one of which, a daughter, died in 2014. Her remaining children are scattered across the US, Canada and Seychelles where lives 2 of her sons as well as an adopted daughter.

SNA asked May Celtel’s granddaughter to ask her how she feels and what she believes has led her to reach 100 years and this is what she had to say: “I feel great and happy…I always asked God to prolong my life and he has done so according to his will.”

Celtel’s family says she has one younger sister aged 90 years old who lives at Beau Vallon in the northern part of the main Seychelles island of Mahé.

There are currently nine centenarians living in several parts of the Seychelles islands.

According to information provided to SNA by the Seychelles Ministry for Social Affairs, Community Development and Sports, all nine centenarians are women with the oldest being Nancy Marie from English River.

Bertie Edouard Mahoune who was the only male centenarian of the Indian Ocean archipelago of 115 islands with a population of around 90, 000 people died in February this year.

According to figures available from the Seychelles National Bureau of Statistics website dated to 2013, life expectancy amongst the islanders for both male and female is 74.2 years old.

The data also shows the tendency that Seychellois women tend to live longer than men with the life expectancy of female being 79.5 years and for male 69.3 years.

People » Be a reporter: Write and send your article » Subscribe for news alert
Tags: Flolrida, May Celtel, Mombasa, centenarians