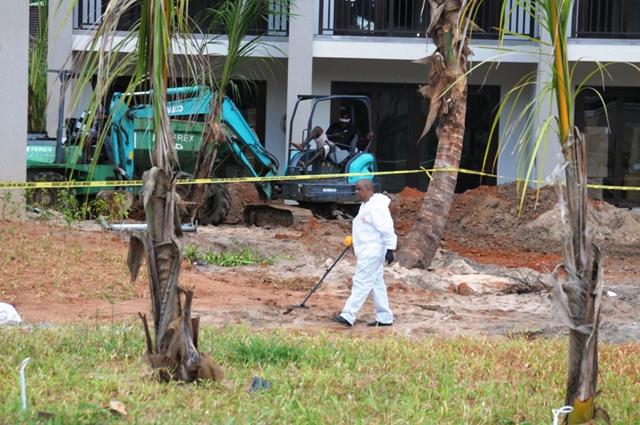 A forensic team cordoned off the site on Saturday morning and used a metal detector to find the bullet casings. (Seychelles Nation)

(Seychelles News Agency) - Bel Ombre, a coastal village situated in the northern part of the Seychelles’ main island of Mahé, has long been associated with mystery. The area, which borders the popular tourist beach of Beau Vallon, is thought by some treasure hunters to be the site where famous 17th-century buccaneer Olivier le Vasseur, nicknamed La Buse [the Buzzard] allegedly hid one of the largest treasures in pirate history.

But the area has been dominating the local Seychelles press this week for another mystery – the finding of a skull and empty bullet casings at a new hotel construction site bordering the sea.

This is a project being undertaken by the Dubai-based hotel chain, H Hotels.

The Seychelles Commissioner of Police, Ernest Quatre, has confirmed to SNA that three empty bullet casings have been found.

He also confirmed that local forensic teams currently examining the skull have determined that the deceased was an adult male.

The skull was found by employees of a company contracted to landscape the grounds around the new hotel. The workers later re-buried the skull in a different location, but pictures of the original find taken by the workers surfaced through the popular social networking site Facebook on Friday last week.

Commissioner Quatre said the police had been notified of the discovery via social media and information received via telephonic tip-offs.

By Saturday morning, the police had cordoned off the area and were seen using metal detectors to locate the bullet casings.

So far no other human remains have been found besides the skull.

“This is a construction site - several structures were built and lot of excavation work carried out, however efforts were made to find the human remains but so far in vain,” said the commissioner, adding that the police still plan to carry out further searches for the rest of the skeleton.

There are thus far two families of missing persons who have officially come forward in search of whether the skull could belong to family members. Both persons are reported to have gone missing several decades ago.

Commisioner Quatre says he has also been informed that there is a third family based on Praslin, the second most populated island of Seychelles, which has made enquiries at their local police station about DNA testing. The missing man, originally from Praslin, is thought to have also disappeared while on the island of Mahé.

The commissioner has confirmed to SNA that the DNA testing will be carried out overseas soon.

The DNA, which can be extracted from the bones or the teeth of the skull, will then be compared to the families to see if a match can be found.

As the forensic examination of the skull is still underway, the year of death and cause of death have not yet been established.

The forensic scientists will now have to take the rate of decomposition of human remains in Seychelles and compare this to the state of the skull to determine when the person died.

“We will explore all possibilities in trying to establish facts surrounding this case,” said Commissioner Quatre.

“If as it is being said there is injury to the skull we will have to first determine if this is true. If yes, we have to see if the injury could have caused the person’s death. Then we will have to determine if there has been an act of criminality,” the Assistant Commissioner for Policing, Reginald Elizabeth told local newspaper the Seychelles Nation in an interview at the site on Saturday.

He added that there was no evidence of any clothing around the area where the remains were discovered.

According to the commissioner, the landscaping workers were not facing any repercussions from police for tampering with the scene.

“The law makes it an obligation for someone to report the finding of a dead body to the appropriate authority - the police - but not for human remains unless if knowing a crime had been committed and intended to hide evidence,” the commissioner told SNA.