A sporty stunner with a flair for fashion; Miss Seychelles contestant Petra Richard 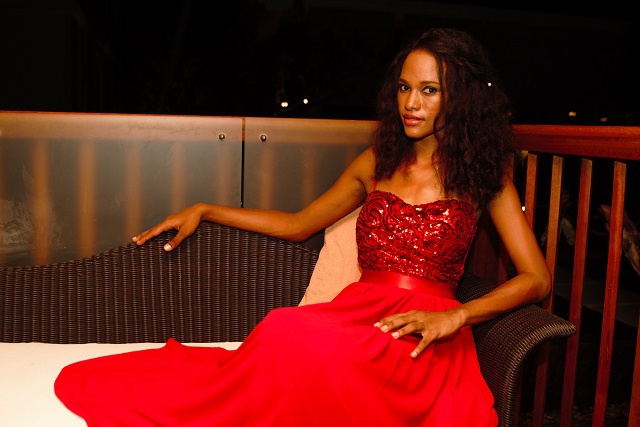 (Seychelles News Agency) - Petra Richard has always had a flare for fashion and design, and so she followed her heart by studying at the Seychelles School of Visual Arts. Having successfully completed her studies in 2013, for which she was awarded the President’s Cup as the best performer in her cohort, Petra then received a scholarship to study in South Africa.

After returning to Seychelles, she started her own business as a seamstress, sewing a variety of different items.

“I can make anything,” she proudly told SNA in an interview, adding that currently she is sewing mostly household items such as curtains and cushions.

With her own business doing well, Petra has also participated in various fashion shows including ‘Fon Lanmal’, an event organised during the annual Creole Festival every October which showcases the culture of Seychelles.

“I had only three weeks to complete my collection and it was a stressful time but also one of my proudest. I can now say that I can work under pressure.”

This year, the Seychelles School of Visual Arts will be sponsoring the casual wear collection of the fashion show ‘Fon Lanmal’ and two of Petra’s garments will be used in the pageant.

“I’m so honoured and surprised, especially because I will be wearing one of my designs,” she said.

Standing at 1.88 metres, 22-year-old Petra stands apart from most other Seychellois ladies, and she has employed her height advantage the most through her participation in sports events.

Basketball, badminton, swimming, gymnastics and high jump are some of her favourite sports. In 2012, at the 36th Annual Inter-School Athletics Championships, she set a new high jump record of 1.48 meters although this record would eventually be beaten.

However, it was through volleyball that Petra has travelled to various countries, including France, Mozambique, Algeria, Mauritius, La Reunion and Kenya.

At the height of preparation for the ninth Indian Ocean Games (Jeux de l’Océan Indien) which will be held in neighbouring Reunion island in August this year, Petra, who plays for local women's volleyball team Cascade, told SNA that she was at her happiest when she was selected for this year's national team which will represent Seychelles in this discipline.

Shy and quiet while growing up, Petra says that "it is thanks to volleyball that I came out of my shell", crediting the sport with giving her the confidence she needed to apply for the 2015 national beauty pageant.

As a reflection on her strong commitment to sports, Petra has focused her 'Beauty With a Purpose' community upliftment project on inspiring younger generations to take up a sport as a habit for life. She has managed to speak to students about the project and has since received positive feedback and enthusiasm from others.

Despite her busy schedule, Petra says she still manages to stay up-to-date with the news of the country of 90,000 inhabitants, and also like to entertain herself through sports and fashion magazines.

Doing what she loves provides the greatest joy to Petra, and she likes to keep abreast of all the modern trends in fashion while adding her own flair to remain unique in the business of designing and sewing.

Although Petra is content with her business, she knows that she can do so much more and through her achievements be a role model for other young people. "Keep aiming high, never stop achieving things and be patient": these are some of the words of advice she offers to her peers.

Asked to share one of her secrets, Petra reveals that she wears a 44/45 shoe size and said it was very hard to find shoes in her size. However, she believes it "would be a great opportunity for business to start selling female shoes in big sizes" in Seychelles.

What with a business to take care of, actively preparing for a major sports event, as well as a looming beauty pageant, Petra says she is managing well although the only drawback is that she has to wake up very early and usually comes home late.

With a few days left until the crowning of the next Miss Seychelles…Another World, Petra says she thinks she will do well in the competition as she now feels more confident walking on stage.