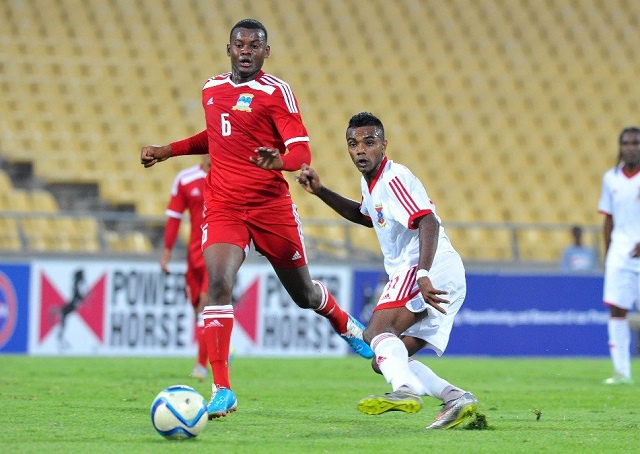 Action of the match between Seychelles and Mauritius during the 2015 Cosafa Cup at the Royal Bafokeng Stadium in Rustenburg, South Africa on May 21, 2015 (Samuel Shivambu/BackpagePix)

(Seychelles News Agency) - Seychelles and Mauritius tested each other's level of play ahead of the next Indian Ocean games as they clashed on Thursday in their last group match at the 2015 Council of Southern Africa Football Associations (Cosafa) Cup in South Africa.

While both sides went into the game knowing that they did not stand any chance at pushing through to the quarterfinals, the match was equally important for the two Indian Ocean rivals.

Seychelles had wanted to defend its standing after having won the gold medal in the last Indian Ocean games held in Seychelles in 2011 when it defeated the same Mauritius in the finals.

However, the match did not go in Seychelles' favour as Mauritius walked away victorious scoring the only goal of the match; their first win at the COSAFA competition.

The decisive goal was scored with only 6 minutes of normal time remaining.

Speaking to SNA in a phone interview from the airport in South Africa ahead of their flight back to Seychelles, the team’s interim Head Coach Ulrich Mathiot said that for the last match four fresh players were sent on the pitch to allow those who had played previous matches to rest a bit and that the team had started off playing a good game.

“Compared the first two matches where it was more counter-attack, for the match against Mauritius we brought in another kind of play and was more on the offense. But in the 53rd minute of the match one of our players got sent off following a second yellow card and this changed the tempo a bit and Mauritius managed to score in the 84th minute,” Mathiot told SNA.

“As for my general assessment following our performance in the COSAFA Cup, I would say the team has performed quite well, we only conceded two goals, but we did not manage to score any goals and this is what we have to improve on.”

Seychelles has finished last in Group A with only one point having had one draw and two defeats in three matches played while Mauritius has claimed the third spot with three points following their win over Seychelles. Mauritius lost its two previous matches against the much superior Namibia and Zimbabwe.

Mauritius is ranked 185th according to the world’s football governing body, FIFA’s ranking while Seychelles stands at 189th out of 209 countries.

In the upcoming Indian Ocean Island Games to be held in Reunion island from August 1 to 9, Seychelles has been drawn alongside Mayotte, Maldives and Madagascar in Pool A while Mauritius will be playing against Reunion, Madagascar, and the Comoros.

“Mauritius is not in our pool for the Indian Ocean Island Games, but we are in the same pool as Madagascar, which we have been looking at their games at the COSAFA Competition. They have very good techniques and very good individual players. Nevertheless, we have a good team effort in place and I believe we have the same chance as every other teams to do well in the upcoming games,” said Mathiot.

The Seychelles side will have more test competitions ahead of the regional games to further improve their play.

In June, Seychelles will meet Algeria in the first leg of the 2017 Africa Cup of Nations (Afcon) qualifiers, and the team will also have to compete in the 2016 African Nations Championship (Chan) qualifiers in Mozambique.

The Seychelles national football squad will also be heading to Europe for more training matches in July and will be coming back just in time for the games in Reunion.

Meanwhile, other results in the COSAFA Cup; Namibia surprised Zimbabwe with a 4-1 win on Thursday claiming the top spot in Group A, which was held by Zimbabwe since the start of the competition last Sunday.

This means Namibia is through to the quarterfinals which will see six higher ranked teams; Ghana, Zambia, Mozambique, Malawi, South Africa and Botswana enter the competition.

Namibia will be playing against the competition’s defending champions, Zambia, in the quarterfinals on Sunday May 24 while Ghana’s opponent will be decided in the last Group B match to be played today when the only Indian Ocean island nation remaining in the competition, Madagascar meet Swaziland.

While Madagascar only needs a draw to push through to the quarterfinals, the competition will remain tight as they play Swaziland as both teams are on two wins with equal points.

In the other final Group B match, Tanzania will be up against Lesotho.