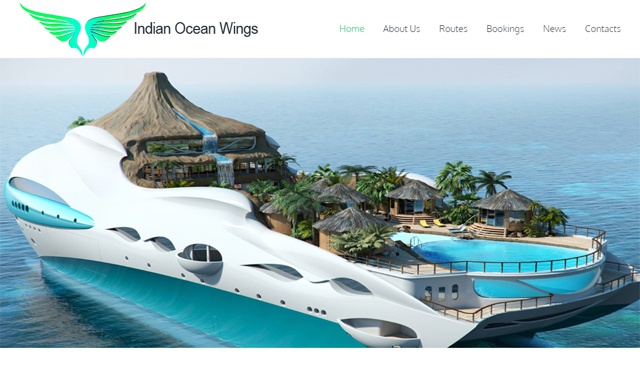 A screenshot of the futuristic winning website, designed by VCS Seychelles. (Webcup 2015)

(Seychelles News Agency) - Thirty-five years into the future and the seven Indian Ocean islands of the Comoros, Madagascar, Mauritius, Mayotte, Rodrigues, Reunion and Seychelles have a combined population of 60 million – that is the scenario that led web enthusiasts from six of these island nations to unleash their creativity over the weekend as they took part in the 2015 Webcup competition.

Teams that could be made up of amateurs, students or professionals participating as individuals or not more than four members had the task of creating a web portal introducing an innovative means of transportation designed to allow trade commercial and cultural exchanges between the islands.

The challenge that began simultaneously across all six participating Indian Ocean islands of Reunion, Mauritius, Mayotte, Madagascar, Comoros and Seychelles was revealed at the start of the competition at 12pm local time on Saturday May 23.

This was Seychelles second participation in the Webcup challenge following its debut in 2014, which saw a total of 3 teams of 4 members each registered to compete; an improvement compared to one team of four and a single-man team last year.The teams had 24 hours to come up with the best website that would earn the first prize winner from each island a spot in the finals to be held later this year.

With a little bit of stretching from time to time, a power nap when necessary, a bite to eat, topped with intense concentration and merging together of ideas and expertise all three teams managed to make it to the finishing line at 12pm on Sunday May 24.

After presenting their projects to the jury, Team VCS emerged as the grand winner with the best website. VCS is the Seychelles Company responsible for registering all websites with the Seychelles.SC country code domain name.

The team participating in the Webcup comprised of Alvin Lebon and Shalika Herath both from Switch, a marketing agency within the VCS group of Companies, Nadun Herath from VCS and Asanka Fernando from Printhouse a printing company also within the VCS group.

Shalika, who is a web developer, was the only female participant among the three teams.

“It was tough, but it’s a good experience,” she told SNA on Sunday afternoon.

For Alvin Lebon, this is his second time winning the Seychelles Webcup after claiming the first prize with Blue Fire in 2014.

“We had to create a website for this new means of transport to connect the seven Indian Ocean islands with a total population of 60 million including providing for online booking… so it was challenging in terms of the topic and in terms of the deadline. The competition was really tough,” a tired Lebon, who was longing for a good shower and some rest told SNA.

“It’s the little bit of what we know that was put together with extra features added that helped us to win the first prize and we are very happy.”

Team 4Sure represented by Richard Perks, Jean-Francois Rose and Dinuwan Senaratne from Kokonet a local ICT company and John Perks a freelance web developer ended the competition in third place.

4sure’s Jean-Francois Rose was also a participant last year where he worked solo on his project.

In spite of encountering some technical difficulties while uploading their final project leading to a bit of disappointment at first, 4sure ended up not going home empty-handed after all, as they took home the 'Virality Prize'.

Each team had to set up a Facebook page at the start of the competition, and the Virality Prize was awarded to the team with the most likes at the end of the 24 hours.

The Webcup is an annual competition initiated by the Webcup Association of Reunion Island in 2010, designed for anyone with an interest in ICT be it amateurs, students or professionals and has since spread to five other Indian Ocean island nations including Seychelles.

The French overseas department in the Indian Ocean came up with this fun and educational event to promote Information and Communications Technology (ICT).

But this year, it’s the newly formed Seychelles Internet Exchange Point Association, SEY-IX that took charge of running the competition with the help of various sponsors.

“One of the aims of the association is to promote ICT in Seychelles and the Webcup is also promoting ICT especially among the young people encouraging them to join this sector, so it is a perfect project for us to sponsor,” Sey-IX’s Chairperson who is also the Managing Director of VCS, Gilbert Lebon told SNA.

Lebon, who also coordinated last year’s Seychelles Webcup said he was satisfied with the number of participants and the hard work they had endured to come up with good projects as well as the involvement of more partners from government to private sector businesses in the ICT field that have come onboard to make the competition a success.

This year’s Seychelles Webcup competition, which is now an annual event, also coincided with the ICT week.

Team VCS will now have to battle it out against computer geeks from the region in the 2015 Webcup final, which is expected to be held between October or November. It's not yet known which of the six participating Indian Ocean islands will be the host nation.

Last year’s finals were held in Mauritius. It is hoped that next year Seychelles will be chosen to host its first Webcup finals.