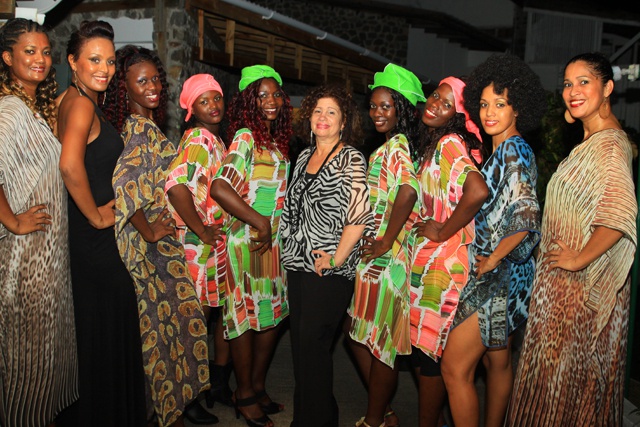 (Seychelles News Agency) - On Saturday evening, the Le Meridien Fisherman’s Cove hotel at Bel Ombre, a popular tourist area in the north of the Seychelles main island of Mahe, was bustling with guests attending a soiree and fashion show as part of the FetAfrik African festival.

FetAfrik, which is celebrated annually on the calendar of events in the 115-island Indian Ocean archipelago, pays tribute to the Seychelles’ strong African roots and cultural ties to coincide with Africa Day, celebrated on May 25 each year.

After running the FetAfrik festival for the past couple of years, the Ministry of Tourism and Culture decided to give ownership of some of the different events to the private sector for 2015, and the organisation of the soiree and fashion show was done by a private events company called Organisers Seychelles.

The fashion show was rather low-key compared to the previous year, with only one designer showcasing her talent.

“Well, I was approached to do the FetAfrik [fashion show], so I thought I'll use some motifs from Africa… colour as well played an important role, and the kaftan I know very well comes from countries in Africa,” she told SNA.

“I went abroad to get some of my fabric because we don't get any fabrics here; I've got some snakeskin print, leopard print, stuff like that, and I decided to put a range of kaftans for this evening.”

Lablache also used plenty of bright colour combinations, which she said was an inspiration from Africa. She also brought in five Kenyan models to complement the Creole models from the Seychelles.

Also present to entertain the crowd was German-born disc jockey Sabrina Terence, who is based in Dubai. This being her second trip to the Seychelles, but her first as a DJ, she says the island vibe she loves of the archipelago has not changed much in the last ten years since she has been here.

The tall blonde with the perfect smile is a former model, and owned her own modelling agency in Germany until 2006, when she moved to Dubai with her now ex-husband. Feeling bored in Dubai, she decided to follow her passion, which was music, and proceeded to teach herself how to mix on a deck she set up in her kitchen.

“I mixed in the kitchen while cooking; mixing, cooking, mixing, cooking... I had my DJ booth on one side and the cooker on the other, but to be honest the first one or two years were not really so good, it was bad. I had barbeque parties, my friends came and they said, 'OK, we will come tonight for your barbeque party but please Sabrina don't play!',” she laughed.

“But then I started doing some events and when you are outside with the people you get into it and you have the feeling more than if you just mix in the kitchen. So year by year you get better,” she added.

But the blonde bombshell is not ready to settle down yet; after almost ten years in Dubai, Sabrina is eyeing a big change, either by moving to Seychelles or Los Angeles.

“I love Seychelles, it's beautiful, and it has a direct flight from Dubai, every day, two times, It's crazy! So I can actually live here and if I have something I can still go back to Dubai,” she said.

If Sabrina moves to the Seychelles, she won’t be doing so quietly – she plans to change the entire party scene in Seychelles and is mulling over starting an upmarket beach club.

For Sabrina, the hardest part about DJ-ing, apart from having to wear high heels for some events, is reading the people in the club correctly.

“For me it's not hard anymore because I know how to do it, but there are a lot of DJs who just play and they don't focus on the crowd, so they play whatever they think or want and then they wonder why nobody's moving or dancing,” she explained.

“So if you want to be a good DJ, the hardest part is to understand and to read the crowd. For me, I travel all over the world and I never know what kind of people are there, never. So I come there and I think 'oh, that's going to be a big adventure tonight!',” she beamed.

One of the first female DJs in Dubai

Sabrina told SNA that worldwide, the ration of female DJs was around 70 male to 30 female.

“Maybe even 40 percent now are female DJs all over the world... but still people are always ‘oh! a female DJ’, it's like something new, I don't know why it's still there but maybe give it another five years and nobody will even see the difference between a female or a male DJ,” she said.

The DJ found that starting her career in Dubai was a stroke of luck, as around 2008 when she started out, she was one of only five female DJs in the male-dominated country.

“I was the first model-turned-DJ, so I had good flyers, good pictures and that was helping me a lot, and now we are 75 [female DJs], so in the last nine years a lot has happened,” she told SNA.

'Leave the house as if you're going to the Oscars', advises Seychelles KanKan designer Karine Dupouy