‘I am a reformer’ – is African Development Bank presidential candidate, Cristina Duarte the woman for the top job? 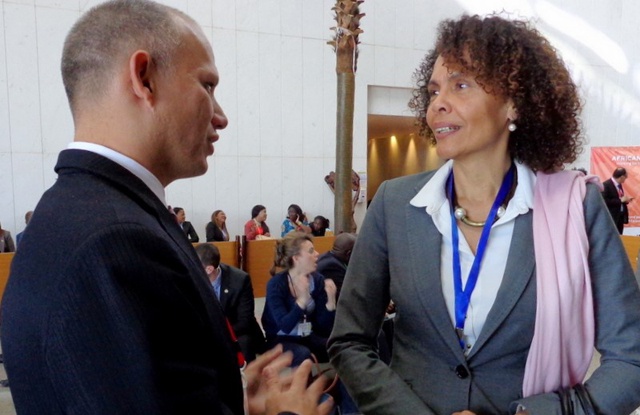 Dr Cristina Duarte, the Finance Minister of Cabo Verde, talk to Seychelles Finance Minister Jean Paul Adam at a meeting in Addis Ababa, Ethiopia. Similar to the Seychelles archipelago situated off the western coast of Africa, Cabo Verde is a small island developing state on the eastern coastline of the continent with a population of around 500,000 people. (Amanda Bernstein, Seychelles News Agency)

(Seychelles News Agency) - This Thursday, May 28 in Abijan, Cote D’Ivoire, a milestone election will take place that will have profound implications for the future development of the African continent over the next five years, if not the next decade.

Founded in 1964, the African Development Bank (AfDB) is a multilateral development finance institution established to contribute to the economic development and social progress of African countries.

The AfDB’s Board of Governors, which is comprised of the Finance and Economy Ministers or Central Bank Governors of the Group’s 80 member countries will be electing their eighth President since its founding for a five-year term and it promises to be a highly competitive election.

In the run up to the institution’s 50th Anniversary, the meeting will bring together over 2,500 delegates under the theme ‘Africa and the New Global Landscape’ to see which of the eight nominated candidates will succeed Donald Kaberuka, who is concluding his ten years at the helm of the organisation.

SNA met up with the only female candidate and Small Island Developing State representative in the running, the current Minister for Finance and Planning of Cape Verde, Cristina Duarte, to discuss her agenda for the bank during a visit in Addis Ababa.

An MBA graduate with a wealth of experience from both the public sector and private sector, including serving as Vice President of Corporate and Investment Banking of Citibank, Minister Duarte brings her enthusiasm and quiet determination to the table.

SNA: To get right into your candidacy for President of the African Development Bank - why you and why now?

CD: I’m glad you started with this simple but important question. There are two main reasons behind this candidacy. There is a country reason and a personal one. Lets start with the country reason. As you are aware, today Cape Verde is a credible country in Africa and we have been working hard to achieve such recognition. Despite the fact that we are a small island and Lusophone [Portuguese speaking] country, we strongly believe that this credibility can be perceived as a source of legitimacy for such a small country.

Cape Verde has a strong experience in terms of good governance, and in terms of trying to transform the economy from a structural standpoint. We believe that maybe it is time to demonstrate ambition and aspire to such a high position. As you mentioned in your question, why me - Why not!

The second reason, the personal reason, is that I have been Minister of Finance since 2006, meaning that I have managed the negative impact of the international crisis in Cape Verde. And so far we have been coping very well, on top of that, I had an opportunity to implement a strong public finance management reform, meaning I changed the fiscal policy framework in Cape Verde making it much more competitive. I also changed the framework in terms of public finance management, making it more rigorous and transparent.

SNA: You have detailed some of your experiences as Minister of finance since 2006, is there anything extra you bring to your candidacy?

CD: Definitely! First let me start again with the country reason again. The fact that Cape Verde is a small Lusophone island country, a candidate coming from Cape Verde can assure and guarantee a certain equidistance in terms of the existing traditional blocs.

Africa has its traditional blocs, the Anglophone, the Arabphone, and the Francophone. I believe that we can bring the necessary equidistance and believe me, now and for the next ten years, the ADB needs this distance in terms of region and countries.

The second positive asset I bring is my experience. I have of course the public policy experience but before that I have a sound educational background with a dual degree in business administration and international management and I have had the opportunity to work with financial institutions in the private sector, on of them being Citibank where I reached the level of Vice President. And I am a reformer. When there is a need for change, I do it.

SNA: What do you see as the biggest challenges facing the AfDB - to you, what are the priorities?

CD: My starting point is recognising that Donald Kaberuka has done an outstanding job. He has managed to put AfDB at such a level that the next President will have a big challenge in filling his shoes.

I believe the next President will have two main platforms on their agenda, the first one is to consolidate Kaberuka’s work, with some adjustments, but the next president must be able to put a new agenda on the table. The challenges of the future are completely different to those faced by the ADB in the past 10 years. This is why I have structured my agenda around five key items.

Let me start with the organisation itself. I strongly believe that the next president should pay more attention to the bank itself as an organisation and should be willing to implement an integrated reform programme to make the bank more efficient. And adopting strong monitoring and evaluation systems so we can see the real impact of the AfDBs work, their budgeting programme etc.

The second item is innovation and creativity. As an African I strongly believe that its time to start moving from managing poverty to switching to a more structural transformation of the African economy. To do that we need to embrace innovation which means Africa does not need to go step by step as others have historically done. We can jump. We need to jump. To do that we need to understand that one of the main actors that will enable us to do this is the private sector. So it’s time to start building a stronger African private sector that can move Africa from managing poverty into the mode of creating and managing wealth. Meaning that when you analyse the value chain of our production, we need to be able to add more steps into this value chain within Africa than what exists today.

Again when you talk about the private sector, it brings me to other parts of my agenda I feel strongly about; that is the gender issue. I will put it in a simple way.

Now it is not only a question of human rights but also one of competitiveness and trying to get more energy into the African private sector. It is not acceptable that today in some countries, a woman has no land rights. Women have no heritage rights. They have no access to financing or education. Now when we talk about women, the only thing we talk about is micro financing – why? We women want to be big and strong players in all sectors. We don’t want to be limited to micro financing; we want more. I think we can do more.

SNA: You mentioned women and the gender issue. This being the African year of women empowerment and development, what is your view of African women in leadership roles?

CD: I think we have been doing very well in the past five to ten years. We are on the right track. Take my country for example. As of today the Cape Verdian government has 54% women and we have more female ministers.

SNA: So Africa has a lot we can learn from Cape Verde?

CD: I think there is a lot we can learn from each other. From a woman’s standpoint I think it is fair to recognise that Cape Verde has come a long way.

SNA: On a personal note, finance is historically a male dominated sector. What prompted your career into finance?

CD: Of course it is true that it is male dominated and in some instances I had to fight harder to reach some positions and get the work I wanted. But I believe that in the first instance you have to believe in yourself, that you have what it takes, that is the starting point. The second point is, just be ready to fight with a big smile.

SNA: Lastly, you have mentioned that Cape Verde is a small country, much like Seychelles, with a population of only 500,000, making it one of the smallest in Africa. What advantages or disadvantages does being such a small player bring when dealing with the African continent as a whole?

CD: It is most definitely a positive asset. I believe coming from a small island country, I am highly engaged in creating windows of opportunities, which can be much harder when considering the specificities of small islands.

For example, when you talk about integration and infrastructure. The trend is to leave us outside, especially when they talk about roads and railroads. I believe its time that African organisations start having a specific agenda for small countries, particularly islands.

Tropeko: A coconut oil from Seychelles that is both tropical and eco