New Norwegian ambassador to Seychelles to focus on SIDS issues 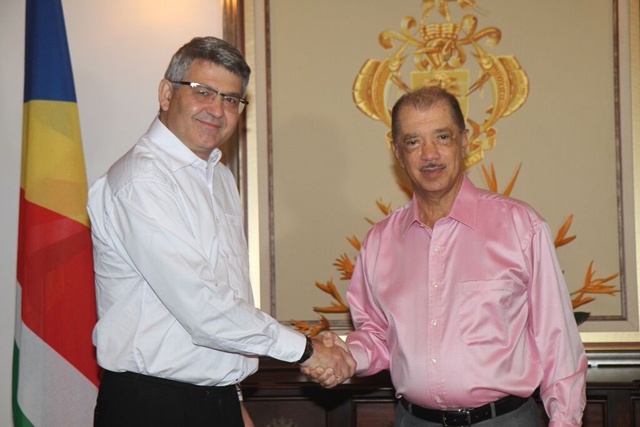 The new Norwegian ambassador to the Seychelles, Victor Rønneberg, greets the President of the Seychelles, James Michel at State House during an accreditation ceremony on Tuesday. (Mervyn Marie, Seychelles News Agency)

(Seychelles News Agency) - The newly-accredited Norwegian ambassador to Seychelles, Victor Rønneberg, will be focusing his diplomatic efforts towards helping Seychelles address its challenges as a small island developing state.

Ambassador Rønneberg met with Seychelles President James Michel on Tuesday at State House in the Indian Ocean archipelago’s capital Victoria, where he presented his credentials to the president for accreditation.

According to a press statement issued by State House, President Michel congratulated the new ambassador and said that the government was looking forward to working closely with him to foster close ties between the countries, which were described as “already excellent”.

Rønneberg is the second ambassador to be accredited to the Seychelles, based in Nairobi. He replaces former ambassador Ingunn Klepsvik who left the post in June last year at the end of her four-year term.

In January this year, Ambassador Marie-Pierre Lloyd was accredited by Norwegian King Harald V as the Seychelles’ non-resident ambassador to Norway.

As Seychelles is classed as a middle-income country due to its relatively high GDP-per-capita ratio, the island of 90,000 inhabitants does not qualify for bilateral aid from Norway, but the two countries have sought other avenues of cooperation during their history of diplomatic ties, particularly in anti-piracy efforts around the Horn of Africa.

Speaking to the local press after the accreditation, Ambassador Rønneberg expressed appreciation for Seychelles’ role in combatting piracy in the Indian Ocean region.

“As one of the major maritime countries in the world, Norway certainly appreciates what has been done to contain the piracy in this area,” he said.

“We also discussed the important work the Seychelles is doing as a member of the small island development community,” Rønneberg continued. “We share many of the same challenges, my country is also a country with a long coast, where the sea is essential for transport and also where we harvest the resources from the sea, so what the Seychelles is doing together with other small island states with regard to the blue economy, to sustainable harvesting of resources is also very important… so we support that.”

The ambassador said he had also discussed Norway’s involvement in the upcoming Third International Conference on Financing for Development (FfD), which will take place on July 13 in Addis Ababa, Ethiopia.

“We are also working closely with you and other small island developing states for the preparations of the Sustainable Development Summit in New York in September and also with regard to the COP-21 in Paris [in November],” Rønneberg said.

“These challenges we have apply to every country, small or big, and we certainly are working closely with you, and we think that Seychelles plays a very constructive role in finding solutions to these large but solvable challenges we have before all of us,” he added.