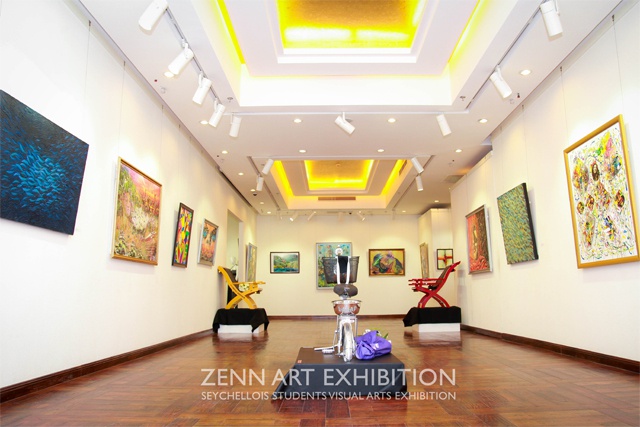 A view of the exhibition room showcasing the work of the Seychellois students at the AC Embassy hotel arts gallery in Beijing. (Zeddy Benson and Lionel Donovan)

(Seychelles News Agency) - Using art as a means to bring them closer together and to use new techniques to combine two distinct cultures. That is what a group of Seychellois students living some 6,700 kilometres away from their Indian Ocean island home of the Seychelles have set out to achieve.

The 13 students who are studying at various Universities across China recently staged a 15-day exhibition at the AC Embassy hotel art gallery in Beijing.

The ‘ZENN’ exhibition as it was called is a concept that embraces the Chinese character 禅(Chan) or Zen and the Creole word - 'Zenn' [native language of the Seychellois people] meaning young people.

“The idea for this exhibition came early last year, we started to actively put things together and seek support in November 2014,” Juliette Zelime, the principal coordinator of the event told SNA in an email interview.

“We wanted to do something together that would bring us closer as Seychellois in a foreign country.”

According to the Agency for National Human Resource Development (ANHRD), there are currently 52 Seychellois students undertaking different fields of study in China.

Oil and acrylic paintings on canvas, digital paintings, photographs, sculptures and tailored garments, all done by the Seychellois students themselves were some of the work displayed in the exhibition.

“We all had the platform to showcase our talents in any way we wished. The goal was to show the educational and cultural absorption [of Chinese culture] by the students mixed with our innate creole culture,” Zelime told SNA.

Interestingly, not all of the 13 students are studying arts, nevertheless they have tapped into whatever knowledge they have added to their passion to produce their artwork.

“A wealth of beautiful craftsmanship of the Seychelles traditional sitting chair [fotey - in the native creole language] abounds in a wonderful arrangement of colours showing our seas, textures, shapes and colours reminding us how beautiful Seychelles is,” that is how Kenny Constance who is studying for a Masters in Architecture & Urban Planning at the South China University of Technology described the outcome.

Darrel Antat who is studying for a Bachelor of Arts in Mass Communications at the Beijing Jiaotong University told SNA that while it was not an easy task realizing the project he is proud to have been a part of such an initiative.

“…It was a joy to see something that we had worked so hard on to put together, come together beautifully. It was a proud moment for me...” said Antat.

For Steven Servina who is studying for a Masters’ degree in interior design at the Donghua University, the ZENN exhibition has allowed him to showcase the influence that the Chinese education and culture has had on his potential, ability, techniques and skills.

“…And most of all it has helped us to gather all Seychellois in China…'Reviv nou Kreolity an fanmir' [Relive our Creole identity as a family].”

Studying at different universities across China meant that the team had to rely on technology, using a mobile application software “we chat” to communicate and coordinate their activities and plans to finally be able to showcase their creations.

“We have seen in all the artwork that the Seychellois students in China are surely taking their studies seriously and seizing every opportunity available to develop themselves… I also believe that this exhibition has showcased the true exchange of the partnership and friendship that exist between Seychelles and china in the field of education and culture.”

The Zenn Exhibition team have acknowledged the generous help of other Seychellois students in China to secure sponsorship for their ambitious project from the Seychelles embassy in China and other organizations and businesses in both China and Seychelles including Kaju – Zelime’s own uniquely branded line of accessories such as bags, jewellery and t-shirts, Compassion foundation, the Seychelles Tourism Board as well as anonymous donors.

The exhibition which ran for two whole weeks from May 15 to May 29 has already got the team thinking about the possibility of staging more of such art displays in the future.

“There have been discussions to move the exhibition to other places in China and even Seychelles, but it remains undecided as it would require a lot of time and resources,” Zelime told SNA adding that the exhibition’s success is not only for each and every one of them but they also dedicate it to their homeland the Seychelles.

“ZENN exhibition was a challenge; one of the hardest. It took initiative and commitment, hard work and perseverance and most of all understanding and tolerance because we were working as a team,” said Zelime adding that it is hoped the initiative will inspire other youth especially those with talents in visual arts.

“It takes tiny seeds to grow into big trees…We left Seychelles as seeds and we will go back as mature trees bearing fruits…‘ZENN’ exhibition is proof of that and I’m sure there’s much more to come...”

Zelime first went to China in 2006 to study for a Bachelor’s degree in visual communications at the Central Academy of Fine Arts in Beijing.

Graduating in 2010, the young woman returned to Seychelles, where she worked for a while and also took the opportunity to start her own business in 2012, creating a line of bags and accessories using what she had learned from her studies in China

Zelime who returned to Beijing in September 2013 to pursue a three-year Master’s degree in visual communications, was also one of 26 award recipients, at the Asia-Pacific African Achievers Awards ceremony held in Beijing at the end of June 2014.