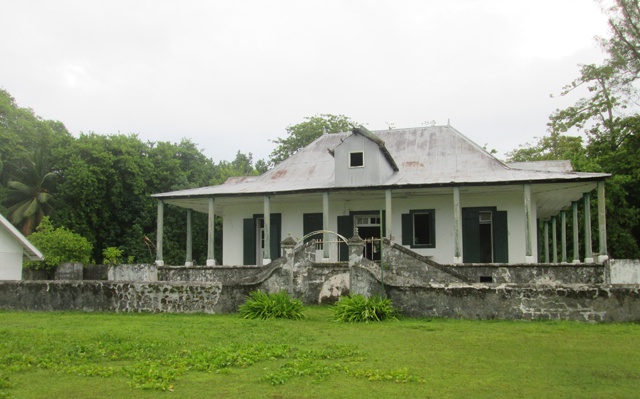 (Seychelles News Agency) - A small group of six Chagossians residing in Seychelles recently returned from a week’s tour of their homeland, re-living a tragedy spanning six decades; the forced removal of hundreds of islanders from their home, to make way for a US military base.

The six joined similar groups of Chagossians living in Mauritius and the UK for a special tour of the Chagos archipelago in early May.

The small group from Seychelles travelled to Chagos by flying Emirates Airlines to Dubai and Bahrain, from where they were brought across to Diego Garcia by a US military transport plane.

The travel costs were borne by the British government.

For Christianne Camille, 59, the trip was tinged with nostalgia. She was nine years old when she and her father, Christophe Tamatave, a mason by trade and her mother Jessy Jasmin were forced to leave the island which the family had called home for 13 years.

Her elder sister Astride died before she was born and is buried in a cemetery on Diego Garcia, which they visited.

She can still recall sailing to Mahe - a two-day journey aboard the schooner called 'Isle of Farquhar', owned by Mouline & Company, which had until then managed the coconut plantations in the Chagos islands.

“We left aboard the schooner Isle of Farquhar with just one large suitcase and two mattresses and got off at Port Victoria’s Long Pier,” she told SNA in an interview.

Christianne said her destitute family was taken in by an uncle residing at Mont Buxton, a Victoria suburb, until they could afford a place of their own.

During the islanders’ forced resettlement between 1967 and 1973, it is estimated that around 1,500 of the Chagossians ended up in Mauritius and 500 in Seychelles.

For Alvin Tirant, another member of the group, the trip to Chagos was his second, having already been a part of the first group to be allowed a visit there in 2006, when he had replaced his mother, Chagos-born Josianne Vel, who is now 60 years old .

On this second trip, Alvin, who is a first-generation descendant, was acting as helper and escort to the elderly group of Chagossians.

Chagos is constituted of seven atolls made up of more than 60 islands altogether. Its total land area is 56 square kilometres, of which Diego Garcia is the largest.

Besides Diego Garcia, the group also visited the other previously inhabited islands of Peros Banhos and Salomon.

“I was impressed by the pristine beauty of all the islands. Even on Diego, pollution was not visible, at the sites they allowed us to visit under escort," Alvin told SNA.

The group brought back photographs of the large lagoon, teeming with fish, turtles and other marine life.

The islands of the British Indian Ocean Territory (BIOT) has been reported to have the one of the healthiest reef systems in the world, although Andrew Bruckner, the chief scientist for the Khaled bin Sultan Living Oceans Foundation, recently reported evidence of coral bleaching due to rising ocean temperatures.

The Chagossians visited the main plantation house known as “Grann Kaz”, cemeteries and a well-maintained chapel among other sites of interest.

Christianne and Alvin both told SNA that while an effort has been made to rehabilitate some structures on Diego Garcia, the buildings on Peros Banhos are in a total state of abandonment and delapidation.

The island is completely overgrown and after travelling there by dinghy to tour the 'Grann Kaz', which is itself in a dilapidated state, they discovered it was impossible to continue further inland. The group had to travel to the other side of the island by dinghy to get to the cemetery.

At Salomon however, the Chagossians were surprised to see five yachts anchored offshore. There was even a volleyball net strung across the beach.

Alvin said he raised the issue of non-Chagossians being allowed on the island, while natives were still barred from visiting except on strictly-controlled journeys such as these.

“The escort told us that foreign yachtsmen are frequent callers and obtain permission from the British Indian Ocean Territory (BIOT) administration. They pay a fee and are allowed to stay for a specific time,” Alvin told SNA.

That could explain why Salmon looked well-maintained, with footpaths criss-crossing the island, compared to Peros Banhos.

The Chagossians were however distressed when they came across a pile of non-biodegradable rubbish under a notice board urging visitors to take their litter away with them.

“It was obvious to us that the situation was not being well monitored,” Alvin said.

The visiting Chagossians are however of the unanimous opinion that they would welcome the chance to return to their islands, if given the opportunity, on condition that infrastructure, such as roads, water supply and electricity was put in place.

“I believe there is a huge potential, especially for tourism,” said Alvin.

A sizeable number of the exiled population decided to move to the United Kingdom after they were finally given eligibility in 2001 to apply for British citizenship, which was taken up by approximately 1,400 individuals.

Since 1978, the Chagossians have filed several court cases against the British government for their right to return to the island and for some sort of compensation which included the possibility of living in the UK and visits to Diego Garcia, the first of which was conducted in 2010.

Now that more than half of the Chagossians removed from the islands in the late 60s and 70s have died, a draft report of a KPMG feasibility study commissioned by the British government was released, providing preliminary insights into the cost of partial resettlement of the islands.

In the draft report, KPMG suggested that allowing Chagossians to live on the islands once more, would cost a minimum of 54 million pounds sterling, spread over three years.

The amount would cover things such as a brick hospital, school, roads and a water and electricity supply for between 50 and 100 people initially.

The chairperson of the Chagos Committee of Seychelles, Gilberte Gendron, whose mother Anne-Marie was born on Chagos, told SNA that the Chagossian community living in Seychelles is about 300 strong. She adds that fair number of Chagossians in Seychelles availed themselves of the opportunity to gain British passports and have since left Seychelles.

Mauritius initiated proceedings in December 2010 against the UK under the United Nations Convention on the Law of the Sea (UNCLOS) to argue the sovereignty of Mauritius over the Chagos archipelago and challenge the legality of the Marine Protected Area (MPA) which was declared around the Chagos Archipelago by the British government in April 2010.

Mauritius and the UK have been involved in a long-standing dispute due to Mauritius’ insistence that the UK government should honour its original undertaking to eventually return the islands to Mauritius after the Chagos archipelago was detached from Mauritius prior to its gaining independence from colonial rule in 1968.

The Permanent Council for Arbitration (PCA), gave its ruling in March this year.

The tribunal’s award, which was final and without appeal, is binding on both parties and ruled that the creation of the MPA violated international law.

The tribunal found that the undertakings given by the United Kingdom to the Mauritian Ministers at the Lancaster House talks in September 1965 to return the Chagos Archipelago to Mauritius when no longer needed for defence purposes was legally binding.

The 50 year lease under which the UK ceded Diego Garcia to the United States for military use expires in 2016. No indication has yet been given by either country as to whether the lease will be renewed.