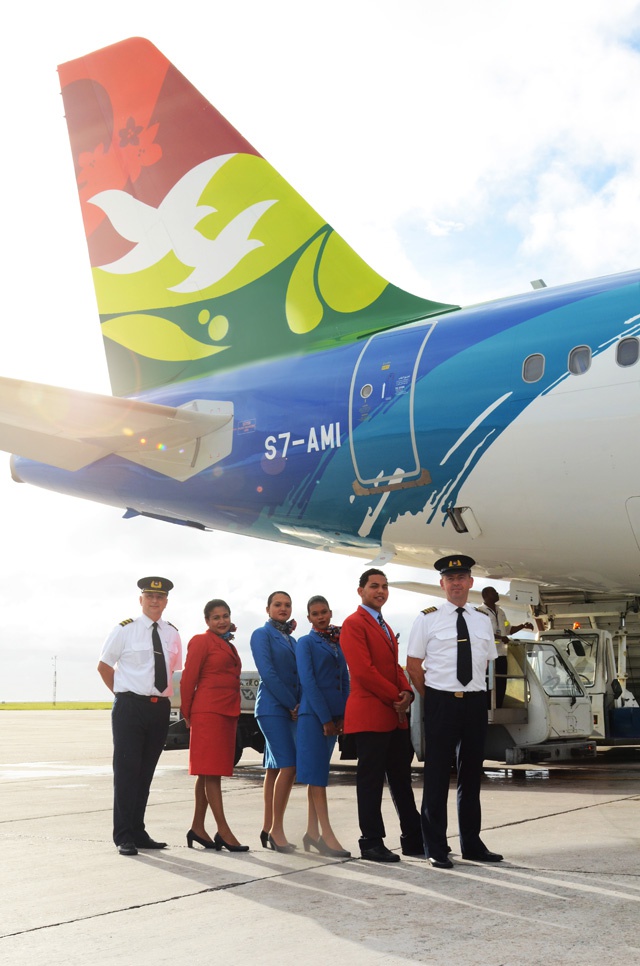 Air Seychelles pilots and cabin crew standing in front of the airline’s first Airbus aircraft to be registered in Seychelles, an Airbus A320 with registration number S7-AMI. (Air Seychelles)

(Seychelles News Agency) - The Seychelles national airline has had its first Airbus, an A320, previously registered in the United Arab Emirates with Etihad Airways, transferred to the Seychelles civil aircraft register.

A move which the airline's Chief Executive Manoj Papa has said will provide Air Seychelles with more growth opportunities including the opening up of air access to destinations which require a Seychelles registered aircraft for charter and scheduled operations.

The now Seychelles registered aircraft, named ‘Amirantes’ after a group of atolls in the southern part of the 115 island archipelago of the Indian Ocean, was leased from Etihad Airways in November last year.

In a press statement issued this morning, Air Seychelles said the change represents a “significant milestone” in the development of the airline adding that the previous arrangement with Etihad Airways “provided flexibility in managing the fleet through its initial growth phase.”

“It reflects the considerable progress Air Seychelles has made in building its operational capacity and strengthening the business in order to meet demanding regulatory requirements,” said Air Seychelles Chairman, Joel Morgan, also the Minister for Foreign Affairs and Transport, in the statement.

Air Seychelles, which was established in 1977 and adopted its present name in September 1978, was until 2012 wholly owned by the Seychelles government.

UAE's Etihad Airways invested $45 million in Air Seychelles when it bought a 40 percent share in the airline in 2012 with the aim of turning the company around after several prior years of losses.

According to Air Seychelles’ Chief Executive, Manoj Papa, the airline now has “the resources, talent and technical know-how to manage all the operational aspects of the A320”.

This he said, follows the building of the capacity of its staff which has seen 20 Seychellois pilots and 194 Seychellois cabin crew obtain training from Etihad Airways’ training academy in Abu Dhabi.

“...the Airbus A320 aircraft is a great platform for pilots in our international operations to gain flying experience before moving up to the A330, which shares commonalities such as a similar cockpit design,” he added.

Air Seychelles has said that in spite of the Airbus A320 falling under the Seychelles register, "the airline will continue to have access to economies of scale, operational synergies and training facilities of Etihad Airways Partners."

The three other aircraft of the national airline that remain registered in the UAE with Etihad Airways, include another Airbus A320 aircraft which was leased from Etihad Airways in April this year to support the logistics of deepening its regional network.

The two others are Airbus A330s acquired in 2012 and 2013, the "Aldabra" and "Vallee de Mai", named after Seychelles' two World heritage sites listed by UNESCO to operate flights to Paris, Abu Dhabi, Hong Kong and Johannesburg.

“We look forward to transferring additional aircraft to the Seychelles register over the coming years, as we continue to grow and expand the airline, driving more tourism and growth in the Seychelles economy,” concluded Papa.