A fashion and tropical islands fusion: CNN to showcase Seychelles in ‘African Voices’ and ‘Inside Africa’ 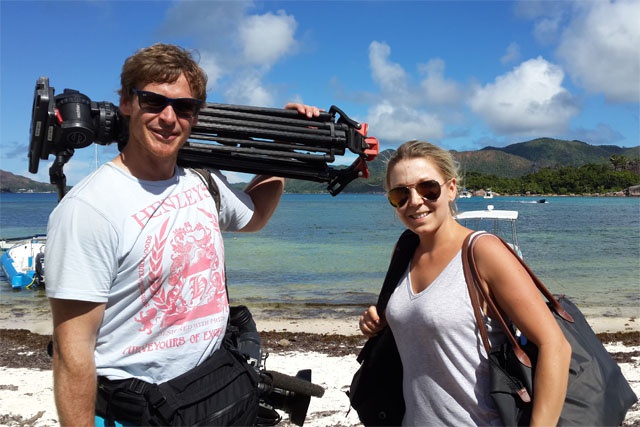 Brooke Bowman and Beau Molloy, the CNN crew of husband and wife were recently in Seychelles filming for the Inside Africa and African Voices segments which are expected to be aired later this month. (Seychelles News Agency)

It is not every day that the tiny Seychelles archipelago of 115 islands in the Indian Ocean with a population of around 90,000 gets to be featured worldwide especially on one of the world’s most popular global television networks, CNN International.

After the recent interview by the island nation’s tourism board’s CEO Sherin Naiken on tourism recovery and last year’s airing of the vibrant colours, costumes and culture displayed at the ‘Carnaval International de Victoria’ it is now the turn of Seychelles fashion to be broadcast by CNN International.

London-based, Brooke Bowman, a former reporter and now freelance TV producer with the American network's Cable News Channel in news and features and cameraman, Beau Molloy have been inspired enough by the 'Kankan' brand to make the trip to Seychelles to make known the local clothing line through CNN’s ‘African Voices’ segment.

“I was researching online and Kankan seemed to pop up a lot when it comes to fashion of Seychelles and I said why not!” Bowman told SNA in an unexpected encounter adding that the explosion of colours will undoubtedly be a hit amongst the viewers.

The producer who has been working with CNN since 2008 told SNA that African Voices helps to promote small business and people performing art in Africa giving them the exposure they need on the international scene.

Considered to be the ‘haute couture’ of Seychelles, the Kankan brand was launched in 2012 by young artist Karine Dupouy with the aim of contributing to the fashion world in Seychelles.

Dupouy who was born in the neighbouring Indian Ocean island of Mauritius was raised in the Seychelles since the age of 3.

The talented designer had the good sense to start her own clothing line after graduating from the celebrated Central Saint Martins College of Art and Design in London.

Gaining her expertise from some of Europe’s celebrated figures, in the likes of Lena Santana, Frank Sorbier and Ratti, Dupouy’s collection geared towards women depicts sophistication and elegance.

Apart from clothing including swimwear which have been the subject of attraction for the lens of the CNN crew, her creations also include jewellery, tableware, among others.

Miss Seychelles…Another world 2014 Camilla Estico who handed over her crown to the new Seychelles beauty queen last Saturday was seen sporting one of Dupouy’s dresses at the Miss World beauty pageant last December, to give a hint of the brand of lavish clothing being produced by the designer.

Interviewed by SNA, Dupouy said she feels proud to have been chosen out of all the other businesses to feature in the CNN programme.

“…I was nervous at first, but they made me feel comfortable. We had two days of filming at various places including my shop at Kingsgate House in Victoria, backstage on the night of the Miss Seychelles…Another World beauty pageant where some of my dresses were being used for the special night by the girls…we did some shooting of the girls in different dresses,” she said adding that the filming crew have been able to capture a mixture of faces and clothing of different colours and designs.

“This will help Kankan a lot. People already know who we are and I hope that through this documentary they will see another side to Seychelles. It shows that Seychelles has got talent even if we are a small country and after the filming the crew felt this documentary will be well received by the audience.”

Interestingly clothing and fashion are not the only things that the CNN crew got to see on their visit to Seychelles which is famous for its crystal-clear warm waters and picturesque tropical beaches.

Coming to the island nation they found that it is almost impossible to totally ignore the surrounding environment and all that is being done in the name of conservation.

Bowman and Molloy found this out first hand, as they eagerly visited a few of the 115 islands of the Seychelles archipelago, this time for a documentary to be aired in the ‘Inside Africa’ segment.

During a trip to the island of Curieuse, a small granitic island located fifteen minutes by boat from Praslin Island, the second most populated island of the archipelago, SNA caught up with them.

The CNN cameraman was seen not only focusing his lens on the giant tortoises roaming around at Baie Laraie but also on the international volunteers working with Global Vision International, GVI, in their humble abode at the bay of Anse Jose.

Used in the past as a quarantine station for people suffering from leprosy, Curieuse has a large population of Aldabra giant tortoises, relocated in the late 1970's from the Aldabra atoll, a UNESCO World Heritage site. It is also the only other island apart from Praslin where the Coco de Mer, the largest nut in the world grows naturally.

With the help of the staff of the Seychelles National Park Authority, SNPA, the crew was given a tour of the best locations including the mangrove system and the higher barren areas of the island which is being rehabilitated.

Curieuse, which is a national park, was the last island visited by the CNN crew after also filming on Bird Island and the coral reef restoration project being undertaken by local NGO, Nature Seychelles off the Coast of Praslin.

“I saw the work that was going on all the different islands, you know, it’s not just one central place and that’s why I chose to visit Bird Island and then Praslin…you can go to any island and there is a story here with conservation,” Bowman explained to SNA.

Capturing the essence of Seychelles

Working as a full time features cameraman/Editor with CNN for 7 years, Beau Molloy noted that he was impressed by what he has seen although he said the weather has not been "too good to me,"

“It’s an amazing place, visually very exciting, colourful, there is a lot happening even if it is island life…,” said Molloy.

He is hoping to “capture the essence of Seychelles and portray that in the films that we put together.”

“CNN seems to be a household name here. People know you when you come and they say ‘Oh CNN, come in'! So it’s very good that they are so welcoming for us.”

Brooke Bowman and Beau Molloy, the CNN crew of husband and wife is hoping that their montages of both Karine Dupouy’s Kankan designs for ‘African Voices’and their filmings of the islands which also include Praslin island’s clam farm at Anse Kerlan, the endemic palm forest of the UNESCO World Heritage site of Vallée de Mai and the underwater life off Cousin Island are well received when they are aired later this month.

Bowman and Molloy are both Australian-born but now living and working in London.

Molloy has also been to other African nations including Zambia and Malawi filming for both Inside Africa and African Voices while Bowman is on her first trip for the two programmes which has also brought them to the Indian Ocean neighbouring island of Mauritius.