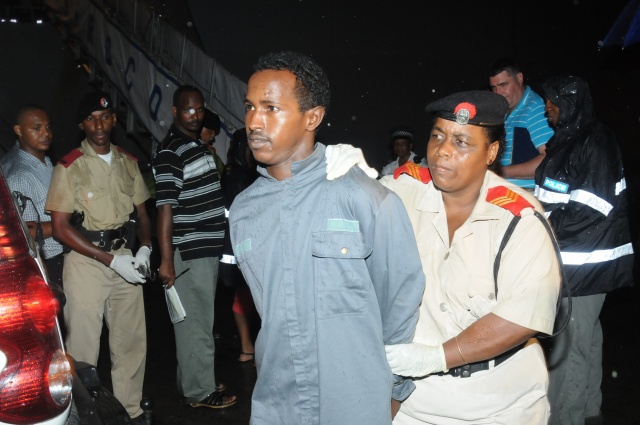 The 5 suspected pirates are transferred into the custody of the Seychelles police by French naval ship 'Siroco' on January 30, 2014 (Patrick Joubert, Seychelles Nation)

(Seychelles News Agency) - Following the April opening of a modern court complex in Seychelles that has special jurisdiction to handle piracy and maritime crime cases, the court started to hear its first case on Monday June 1.

This relates to the trial of 5 suspected Somali pirates who were arrested and brought to Seychelles by French naval ship, 'Siroco', in January last year.

Seychellois Judge Gustave Dodin is presiding this first case to appear before the new court.

Funding for this facility was obtained through a collaboration effort between the United Nations Office on Drugs and Crime (UNODC), the United Kingdom, the Netherlands and the Trust Fund on Piracy off the Coast of Somalia.

The five suspected pirates on trial stand accused of attacking an oil tanker on January 17, 2014 in the Gulf of Aden.

They were arrested the next day by French naval ship FS Siroco, which is part of the EUNAVFOR Atalanta operation, in collaboration with a Japanese air force plane and the Combined Maritime Forces (CMF/CTF 151).

The French and Japanese forces freed the 11 crew members of an Indian dhow that was believed to have been used by the 5 suspected pirates as a mother-ship in the attack on the oil tanker.

The trial of the five Somalis had already started in January this year at the Seychelles Supreme Court, where the French witnesses had given their the testimonies. Now, it’s the Japanese witnesses’ turn to testify.

The five men aged between 19 and 22 are the last remaining suspected Somali pirates that were awaiting trial at the Seychelles prison of Montagne Posée  in the lush tropical mountains leading to the western part of the main inhabited island, Mahé, where they are kept separate from the local prisoners.

The western Indian Ocean island nation, geographically close to the Somali coast, has placed itself at the forefront of the fight against piracy after being greatly affected by the scourge which began to plague the Indian Ocean since 2005, affecting the islands' tourism and fisheries industries.

Over the last couple of years, statistics shows that Seychelles has completed 16 piracy trials.

These trials involving some 142 suspected pirates have led to the conviction of 138 of them on charges of piracy.

According to figures recently provided to SNA by the Seychelles Prison Services, to date, 114 Somali pirates have been repatriated to Somalia, which includes the three who were acquitted in December last year by the Seychelles Court of Appeal.

Apart from the five currently on trial, there were until recently, at least 28 others who have already been sentenced and serving time at the Seychelles Prison at Montagne Posee prison until the time comes for them to be repatriated.

It is to be noted though that the Seychelles court building dedicated to piracy trials and other maritime crimes comes at a time when pirate attacks off the vast coastline of Somalia have declined, from 236 in 2011 to two reportedly unsuccessful attacks in 2014, thanks to international counter-piracy cooperation efforts.