Fearsome predators - if only they moved faster! 8 facts you never knew about giant tortoises 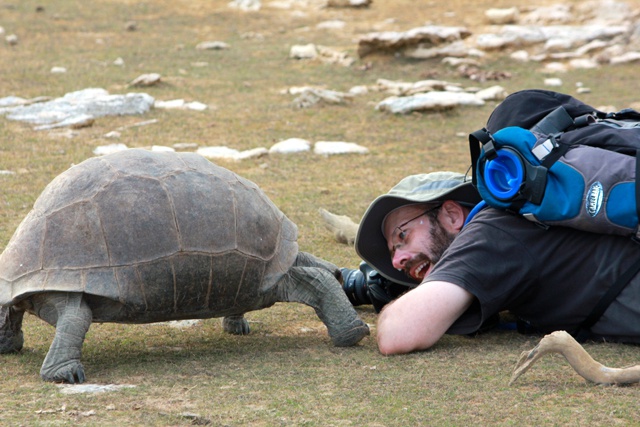 The tortoise whisperer: Dr Dennis Hansen gets up close and personal with a juvenile giant tortoise on the Aldabra atoll in Seychelles (Wilfredo Falcon)

They seem slow, ponderous and not very bright, but there may be a lot that Aldabra giant tortoises are hiding under their shells that most people don’t know.

Aldabra giant tortoises (Aldabrachelys gigantea) originated from the remote and wild Aldabra atoll of islands in the western part of the Seychelles archipelago of 115 islands and are one of the largest giant tortoise species in the world. Males, usually bigger than their female counterparts, are on average around 120 cm in length and can weigh a hefty 250 kg.

SNA caught up with an ecologist and expert on giant tortoises, Dr Dennis Hansen from the Institute of Evolutionary Biology and Environmental Studies of the University of Zurich, to find out more about these amazing creatures.

1. There are more giant tortoises than people in Seychelles

The Aldabra giant tortoise can be found in many zoos around the world, including the famous Bronx Zoo in New York, Bristol Zoo in the United Kingdom and Guangzhou Zoo in China, and there are some introduced populations on the inner granitic islands of the Seychelles and on Zanzibar and Mauritius.

However, the original wild population of the tortoises can be found on the Aldabra atoll, which is a protected area and UNESCO World Heritage Site managed by the Seychelles Islands Foundation and uninhabited by humans save for a handful of researchers and rangers.

What’s amazing about this is that the population of wild giant tortoises on Aldabra, which fluctuates between 100,000 and 150,000, is greater than the entire human population throughout the entire Seychelles archipelago of 90,000 people.

Maintaining these kinds of numbers in an environment such as the Aldabra atoll, which is an arid grouping of islands comprised of jagged raised coral rocks dotted with sparse vegetation and brackish water ponds, is no mean feat.

According to Dr Hansen, tortoises are the ultimate survivalists.

“They can survive a long time without food or water - several months,” he told SNA. “This is mostly because they are cold-blooded animals, with very low metabolic rates - especially when compared with warm-blooded and naked giant [species], such as humans - who have to spend a lot of water on thermoregulation (sweating), and energy on keeping warm and moving. Therefore, for a given amount of resources, such as water and food, you could keep many more tortoises than humans happy, for much longer.”

3. Sailors thought they were a tasty and convenient snack

In times gone by, giant tortoises weren’t isolated to the islands of the Seychelles and the Galapagos alone - the even more gigantic ancestors of the modern Aldabra and Galapagos giant tortoises were dotted all over Australia, India and Central America, but were hunted to extinction all over the world because they made a tasty meal for both early hunters and in later times, sailors traversing the world’s oceans on limited rations.

According to recent research by the IUCN/SSC Tortoise and Freshwater Turtle Specialist Group, the slow-moving giant tortoises were easy game with great quantities of meat and fat and because they could be kept alive for months without food or water, they made an excellent captive prey for eating when needed.

Classified as ‘vulnerable’ on the IUCN Red List, the tortoises are protected by Seychelles law under the Wild Animals and Birds Protection Act.

4. They can survive trans-oceanic voyages

Modern giant tortoises are also able to survive extended periods at sea because of their natural buoyancy. The first substantiated case of trans-oceanic giant tortoise dispersal in 2004 was researched by scientists Justin Gerlach, Catharine Muir and Matthew Richmond after a giant tortoise was found to have washed up on a Tanzanian shore, and is thought to have floated all the way from the Aldabra atoll some 740 kilometres away.

Dr Hansen told SNA that the tortoises’ design helps them to survive at sea: “the surviving giant tortoise species are lucky in having very thin bones in their shells, which, combined with having their lungs in the top bit of the carapace, gives them a natural buoyancy”.

Giant tortoises thus actually float more than they swim, but they are able to speed up or change direction with their feet if the current is not too strong. Hansen says that many of the smaller terrestrial tortoises have much thicker bones, as they often live in continental ecosystems, where they have to be able to survive attacks from predators like lions, and they cannot float very well in water.

“In general, the giant tortoises love fresh water, and will often go into the water to cool down. They do also often move into mangrove areas at low tide, to forage on mangrove plants and seeds,” he explained.

“If they don't get back on to the 'mainland' in time, they are thus easily swept to sea. This is almost certainly what happened to the tortoise described in the paper by Gerlach & others. And this is also how giant tortoises got to Aldabra (and many other islands) in the first place. All it takes is one female with eggs inside to start a new population on a new island!”

5. They help other endemic species

Because of the tortoises’ gregarious nature, they have been known to knock over small trees and shrubs to obtain nutritious leaves, which makes pathways and clearings in dense brush for other animals.

The tortoises on Aldabra also help to disperse seeds unique only to the atoll.

“The Aldabra tortoises love to eat the fruits of the endemic Aldabra tomato (Solanum aldabrense). A PhD student of mine, Wilfredo Falcón, is on Aldabra right now, studying how the tortoises and other frugivores feed on the tomatoes and later spread the seeds around the landscape,” said Dr Hansen.

“This type of mutualistic interaction is called seed dispersal; the animal gets a meal out of it (and energy), and the plants get their seeds spread out over a large area when the animals defecate, which increases the likelihood of the seeds germinating and growing into adult plants themselves.”

6. They are practically immortal

Giant tortoises are thought to be some of the longest-lived animals on the planet. Some Aldabra giant tortoises, particularly those in captivity, are thought to be around 200 years old or even older, although it is difficult to establish their accurate ages since they predate their human observers and record-keepers.

Adwaita (meaning "unique" in Sanskrit) was believed to be one of four Aldabra giant tortoises brought from Seychelles by British sailors to India as a gift to Robert Clive of the British East India Company. Adwaita is thought to have been hatched around 1750 and was brought to the Kolkata Zoo where he survived until March 2006, at an estimated age of 255.

Jonathan, another giant tortoise from the Seychelles brought to the British Overseas Territory of St. Helena at the approximate age of 50 as an exotic gift for then-governor Hudson Ralph Janisch, is thought to now be the oldest living giant tortoise at 183 years old.

Because they have had to survive and thrive in such arid conditions, Dr Hansen has witnessed some eye-opening behaviour from giant tortoises that makes him think they could have been a lot more dangerous if they had only been lighter on their feet.

“I think that giant tortoises would be the most fearsome predators that ever lived, if they could only move faster,” he explained. “They will literally eat anything they can get to, and which they think is tasty - including dead animals. This includes crabs, birds, sea turtles, and other tortoises. The first time I saw a group of three tortoises tearing into the decaying body of a fourth, dead, tortoise was quite an 'aha'-moment, to put it mildly…”

National Geographic Pristine Seas explorer Paul Rose found out just how aggressive a male tortoise can be recently when he interrupted a mating session, which resulted in a slightly ridiculous but determined low-speed chase.

Which leads us to our final point...

8. Male tortoises are the Don Juans of the animal kingdom

Apart from being a symbol of hardiness and longevity, giant tortoises are also widely recognised in the Seychelles as a symbol of love, an odd-sounding fact if you didn’t already know that male giant tortoises often spend much of the day trying to get their female counterparts in the mood for a little loving.

Males emit a distinctive bellowing roar when mounting the female of the species to mate, which can be heard from quite some distance away.

The Seychelles Botanical Gardens in the archipelago’s capital of Victoria, both a spot where tortoises are kept in captivity and a favourite location to take wedding photographs, a local legend states that if newlyweds hear tortoises mating while at the gardens, their marriage will be long and happy, to put it euphemistically.

Dr Hansen and other giant tortoise researchers don’t know exactly why the male giant tortoises wish to mate so often, but he has a theory of his own.

“After a male starts climbing onto the back of a female and makes his very characteristic mating bellows, it is actually a female-choice system; the female giant tortoises have to actively lift up their rear end to allow the male to proceed,” he explained.

“How does he convince her? Maybe by calling as loudly as he can, to provide evidence of his size and quality as a potential father. We don't know. What we do know is that the great majority of mating attempts never gets beyond the roaring/bellowing state - so maybe that's why the males try and try and try, to finally convince a female that he's worthy to father her children!”