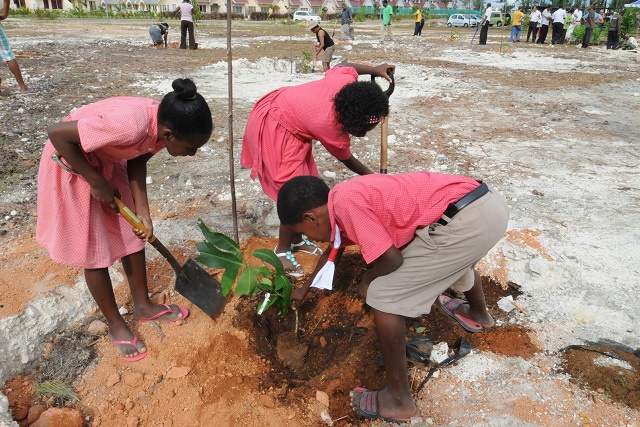 Seventy-seven percent of a selection of Seychellois islanders feel that climate change is a national priority and agree that it should be. This is compared to less than 45 percent of citizens from 80 countries around the world from Afghanistan to Zimbabwe who participated in a global survey called Worldwide Views on Climate and Energy.

A significant proportion - 53 percent - of Seychellois participating the survey also felt that all exploration for fossil fuels should be halted, compared to only 45 percent of the participants in the rest of the world.

The global event began with dawn meetings in the Pacific islands and ended after sunset in the Americas, bringing together groups of ordinary people to discuss what parts they felt their governments should be playing in the upcoming COP 21 climate change negotiations in Paris at the end of this year, where governments from around the world will meet for two weeks to try and hammer out an agreement to bring down global emissions and keep global warming in check.

Around a hundred Seychellois citizens ranging in age from youth groups to members of the country’s pensioners association came together last Saturday to give a voice to the Indian Ocean archipelago’s 90,000-strong population on issues surrounding climate change.

The participants from the event all around the world were provided with the same information packs and watched the same videos before discussing the issues and putting forward their views.

The results were published promptly the following day, allowing users to compare the views of different groups and nationalities.

As one of many small island developing states (SIDS) in the world, Seychellois are not alone in feeling the helplessness of both bearing the brunt of climate change impacts such as rising sea levels, coral bleaching, coastal erosion and severe weather patterns as well as feeling that their relatively tiny voices are not being heard by the developed countries which contribute the most to global warming.

However, the WWViews on Climate and Energy, initiated by the UN Framework Convention on Climate Change (UNFCC) and other international partners, finally gave ordinary people the ability to express themselves on the direction they feel the world should be going in by holding what has been declared the world’s largest public consultation exercise.

Speaking to local television station SBC at the workshop on Saturday, Minister of Environment, Energy and Climate Change, Didier Dogley said that although the Seychelles was small, the country could make a valuable contribution to the climate change negotiations, particularly when joined together with other small island developing nations.

“...we know that the countries that will be first affected are the small islands. In 2013, 2014 and 2015 we have seen one case of bad weather after the other, which we are not used to experiencing and other countries in the Pacific have been hit by cyclones, Philippines also has been several times hit by powerful cyclones, so it’s clear that action needs to be taken with regards to the emission of greenhouse gases throughout the world.”

“As we know there is this link between what we call fossil fuel meaning if you are using gasoline, diesel or charcoal - which is what drives the economy worldwide - and if you are using them you are definitely contributing to emitting greenhouse gases,” he said. “In the end there is a lot of carbon and other dangerous gases released into the atmosphere and this is when you experience climate change.”

An astonishing 92 percent of the Seychelles group said they felt their government should take measures to reduce national greenhouse gas emissions, even if many other countries did not agree to the same measures.

The Seychelles archipelago of 115 islands is classified as a middle-income developing nation due to its relatively GDP per capita ($15,644 in 2013) but still struggles with the constraints faced by most small island developing states.

It is clear that from the worldwide results of the survey, ordinary citizens, including those of the Seychelles, want action to be taken to halt climate change, but it remains to be seen what impact, if any, the results of the public consultations will have at the COP 21 climate change negotiations in Paris this November.