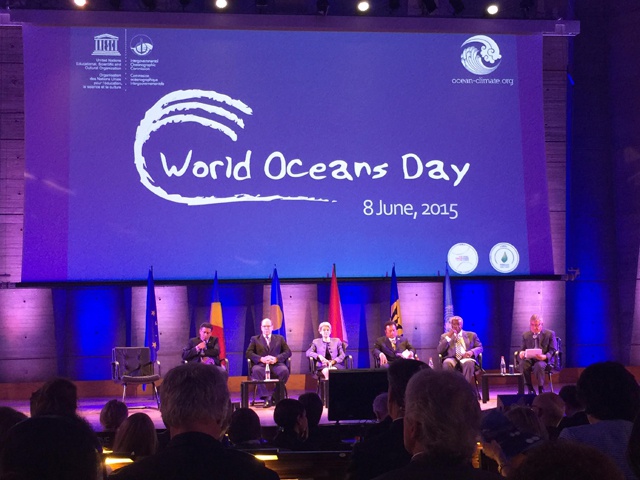 (Seychelles News Agency) - The Vice President of the Seychelles, Danny Faure, has said that small island developing states (SIDS) should leverage the true importance of the oceans which surround them. Vice President Faure was representing Seychelles President James Michel at a UNESCO high level ocean and climate event to mark World Oceans Day on Monday.

According to a press statement issued by the Seychelles Ministry of Foreign Affairs on Wednesday, the Vice President highlighted the importance of the ocean to the Seychellois nation, spurring the Indian Ocean archipelago’s transition to a ‘Blue Economy’ model based on the sustainable use of its extensive 1.3 million square kilometre Exclusive Economic Zone.

“We are small island states, but if we are to give the ocean its true importance, we should consider ourselves large oceanic nations. The world’s large ocean states and territories hold valuable solutions and lessons in conservation, adaptation and resilience,” he said at the event.

The 115-island archipelago of 90,000 is currently engaged in drawing up a comprehensive Marine Spatial Plan which will be managed by a trust fund established through a landmark debt to climate change adaptation swap with the Paris Club group of creditors. The Vice President has pointed out the deal as an example to other nations of a small island state leveraging its high debt-to-GDP ratio as a Blue Economy opportunity.

“Our ocean is the source of life; and we must ensure that future generations can access its potential fully and wisely,” said Vice President Faure.

In his message for the day, the Secretary-General of the United Nations, Ban Ki-Moon, echoed the importance of the world’s oceanic spaces, saying that healthy oceans were critical to sustaining a healthy planet.

According to the Secretary-General, two out of every five people live relatively close to a shore and three out of seven depend on marine and coastal resources to survive, but they are becoming more acidic as more and more harmful greenhouse gas emissions are absorbed into the oceans.

“Ocean ecosystems are degrading. Corals, which sustain so much of marine life, are vulnerable to bleaching and even death caused by warmer temperatures,” he said. “The science is clear: humans have caused changes to the climate system that are linked to the warming of oceans. Sea-levels are rising, with devastating effects on vulnerable communities, especially people living in small island developing states.”

The ocean and climate event was organised by the Intergovernmental Oceanic Commission and the Ocean and Climate Platform at the UNESCO headquarters in Paris and brought together scientists, government representatives and civil society and youth organisations to discuss the ocean’s essential role as the life support system of the entire planet.

Participants worked on a document entitled “The Ocean’s Call for Climate” which asks for the world’s oceans’ integral role to be recognised in the upcoming 2015 climate change negotiations in Paris, COP21.

The document has also called on the world’s climate change negotiators to recognise the adaptation challenges faced by coastal regions and island nations and to integrate projects related to sustainable management and the conservation of marine and coastal biodiversity into climate finance mechanisms.

UNESCO has invited all people to support the initiative and sign the document ahead of the COP21 climate negotiations.