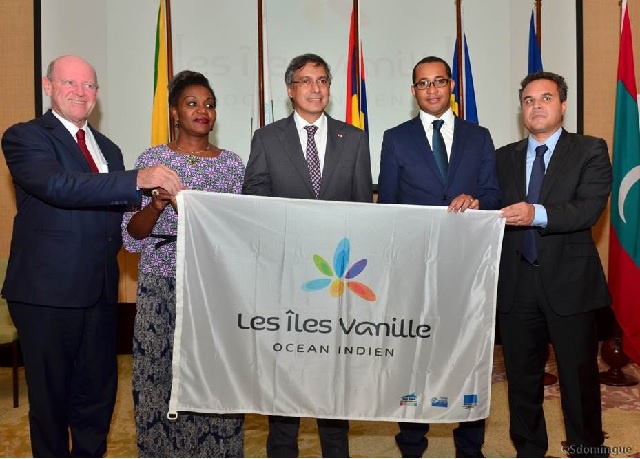 The tourism ministers of the Indian Ocean islands of Seychelles, Mauritius, Reunion, Madagascar and Mayotte pictured on Wednesday after the handing of the presidency from Madagascar to Mauritius. (Seychelles Ministry of Tourism and Culture)

(Seychelles News Agency) - The Indian Ocean island of Mauritius has taken over the rotating presidency of the Vanilla Islands organization, with the Mauritian Deputy Prime Minister Xavier Luc Duval vowing to use his mandate to "further strengthen the regional grouping."

Duval was handed the Vanilla Islands flag on Wednesday during the 2015 Ministerial Meeting of the Indian Ocean Vanilla Islands held at Balaclava’s Westin Resort in Mauritius.

The meeting saw the participation of tourism ministers from Mauritius, Seychelles, Reunion, Madagascar and Mayotte while the Comoros and the Maldives were absent.

It is now also almost five years since the regional association of Vanilla Islands was created in August 2010 to promote and market tourism in the Indian Ocean under a common brand.

The presidency of the group is chosen by election each year. The Seychelles Minister for Tourism and Culture Alain St. Ange was first to head the organization serving two consecutive terms in 2012 and 2013.

Then Reunion Island took the helm, followed by Madagascar before handing over the task to Mauritius.

The Seychelles tourism minister has welcomed the new president, stressing on the importance of unity to strengthen the regional grouping.

"Creating a new tourism region is no easy feat, but together we shall continue to work as a region as brothers and sisters to grow our tourism industry for the benefit of our respective islanders and for the economy of our respective islands," said St Ange in a press statement issued yesterday evening in which he has also assured Duval of Seychelles’ total support.

The Vanilla Islands organization also recently released combined regional tourism figures for the islands, and visitor arrivals have shown a 15 percent increase across the region.

Seychelles, with its population of 90,000 inhabitants, benefited in 2014 from a boost in dual destination marketing.

Packages where visitors can travel to an African country, such as South Africa, Tanzania or Kenya as a safari destination and then transfer on to the Seychelles, Reunion or Mauritius as a beach getaway are becoming increasingly popular.

Tourism remains the main pillar of the Seychelles economy. The archipelago recorded 232,667 visitors between January and December 2014.

For this year, according to latest figures available from the Seychelles National Bureau of Statistics 114,936 visitors have disembarked in Seychelles which is 16 percent above last year’s figures for the same period.

The Vanilla organization have already announced initiatives to boost arrival numbers between the islands.

This includes recent approval by Costa Cruises, a popular worldwide cruise operator, to increase the number of cruise liners and rotations to the Vanilla Islands region in the next two years, which was announced by the director of the Vanilla Islands, Pascal Viroleau, during a visit to Seychelles in April for the ‘Carnaval International de Victoria.’

The national airlines of Reunion, Madagascar, Seychelles, Mauritius and the Comoros are also expected to sign a historic agreement for greater connectivity between the island states, known as ‘l’Alliance Vanille’ or Vanilla Alliance, next week on June 18 in Antananarivo, Madagascar.

This was agreed upon during the Indian Ocean Commission of Ministers meeting held last month in the Madagascan capital.

Building on that, the new vanilla islands President Xavier Luc Duval also the Mauritian Minister of Tourism and External Communications, has announced new initiatives he is planning to implement during his mandate.

According to a Mauritian tourism website, Duval is firstly planning to make an impression at the next Top Resa, France's international travel and tourism trade fair, scheduled for September 29 to October 2 this year, where the Vanilla Islands is expected to have a common stand.

"This year we will have a dynamic stand and we will showcase not only the inter-island cruising opportunities but also the richness of our cuisines," he was quoted as saying.

According to the article, the Deputy Mauritian Prime Minister also plans to initiate a Vanilla Islands golf tournament, as well as the harmonization of the classification of hotels across the Indian Ocean islands.

The Seychelles tourism authorities have already announced plans to improve the standard of hotel accommodations across the board in the Indian Ocean archipelago, by introducing a new grading system or hotel classification programme.

A total of 61 out of the 470 accommodation businesses will fall under the new classification programme when implementation starts which is scheduled to be in 2016.