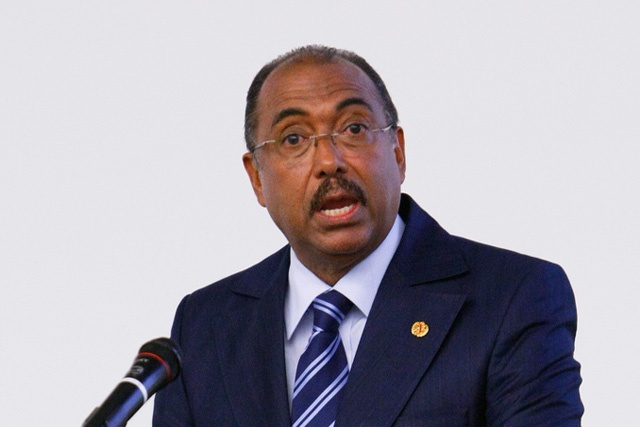 (Seychelles News Agency) - Seychelles’ efforts and progress in the fight against HIV/AIDS have been praised while areas that need attention were highlighted, by the UNAIDS Executive Director Michel Sidibe during a press conference Wednesday April 22, at the Seychelles Ministry of Foreign Affairs.

“Seychelles is amongst the two countries in Africa today, capable to say without any doubt that they are financing 100 percent of their AIDS response (…..) when almost 90 percent of our countries are dependent on foreign resources when it comes to putting people on treatment for life, something which is not sustainable,” said Sidibe.

The high ranking United Nations official was on a working visit in the country where he has had talks with the Seychelles Vice President Danny Faure, Minister for Health Mitcy Larue and other health officials, as well as Foreign Affairs Minister Jean Paul Adam.

The UNAIDS Executive Director said he is very impressed with the progress Seychelles has made in the fight against HIV/AIDS adding that it is not just about spectacular results that the country has registered, but it is all because the government has a vision to place disease prevention and control among its priorities.

All these efforts, Sidibe said are showing results in different areas, for instance, new HIV infections are going down, transmission from mother to child 'is no longer a threat among pregnant women.'

Despite progress made Seychelles still has a lot to do in the fight against HIV/AIDS, he says.

The need for more community testing was highlighted by Sidibe, as he puts it “the first enemy of any disease is not to know your status.”

When talking of HIV/AIDS in general he stressed on five main groups (not in order of priority he said) he personally felt should receive particular attention, namely young women who are at high risk of sexually transmitted diseases, men having sex with men, sex workers, prisoners and the migrant population as well.

“Migrant workers should be an issue of concern as they are always accompanied with some risk factors.”

Sidibe said they should have the possibility to have access with testing to ensure they know their status, as the possibility is there for them to meet with sex workers and engage in somewhat risky behaviours.

The first HIV case in Seychelles was detected in 1987.

According to statistics from the Seychelles Ministry of Health since that first detection up to 2013 a cumulative of 578 HIV cases have been recorded.

HIV/AIDS transmission through the use of drugs especially intravenous users was also a point of concern for the UN official.

The UNAIDS Executive Director spoke about the Seychelles harm reduction programme, stressing that needle exchange alone is not a solution.

“You need a comprehensive package from methadone distribution, psycho social support, a package of services to really help people to be ready to understand what all these are really about,” he said.

Heroin use in the Seychelles islands is a major health concern, as there are an estimated 1,000 heroin users in the 90,000 population nation, according to estimates reported in a 2011 study on injection drug use in the islands conducted by the country's Ministry of Health. These statistics led the United Nations 2013 World Drug Report to conclude that Seychelles has one of the world’s highest rates of intravenous drug use.

The National Drug Enforcement Agency (NDEA) deputy chief officer Liam Quinn said in a statement in February this year that the figures are different in recent assessments.