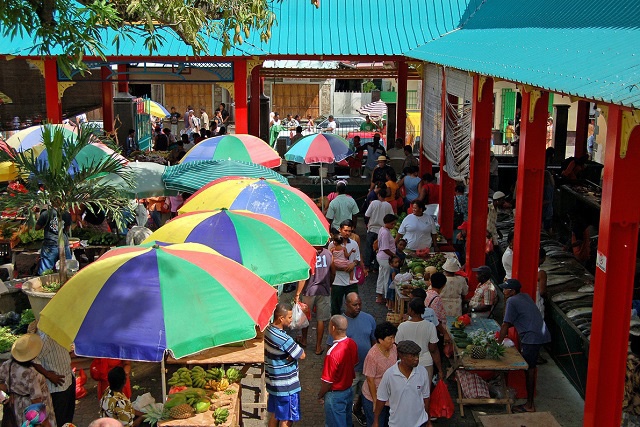 People in Seychelles engaged in their daily business in the Victoria market. Seychelles efforts to actively promote gender equality and empower women and girls in different sectors, namely government, health, education, legislature, business sector among others have been recognised at the AU Summit. (Gerard Larose, STB)

(Seychelles News Agency) - Seychelles has received an award for ‘Gender Parity Achievements’ at the 25th African Union Summit, which came to an end in Johannesburg, South Africa yesterday.

Seychelles was ranked first in Africa for the Gender sub-category in the 2014 Ibrahim Index of African Governance, which rated 52 African countries on eight different indicators including gender equality, gender balance in education, Women's Participation in the Labour Force, women in parliament among others.

According to a press statement issued by State House, the award for gender parity presented at the AU summit is in recognition of Seychelles efforts to actively promote gender equality and empower women and girls. And this, in different sectors, namely government, health, education, legislature, business sector among others.

According to an article published in daily newspaper the Seychelles Nation, the Seychellois Head of State, who was leading the island nation’s delegation at the summit has described the recognition as an “opportunity to take stock of what we have done and move forward to do better still to move Africa forward.”

Michel also met with the Chairperson of the African Union Commission, Dr Nkosazana Dlamini Zuma, in the margins of the AU Summit where their discussions centred on the blue economy as well as the inclusion of the concept which Seychelles is actively promoting in the Agenda 2063.

According to the State House statement, Michel commended Dr. Zuma for her leadership and support shown towards the oceanic agenda, the Blue Economy concept and the importance given to the small island developing states issues.

Both President Michel and Dr. Zuma agreed that more should be done to raise awareness in Africa about the potential of the blue economy.

"The Blue Economy holds a lot of promise and potential for the development of the African continent. But to achieve its success we must ensure that there's peace and security in Africa, so as to be able to harness its potential. We are setting up an Institute on the Blue Economy which will be part of the University of Seychelles, where both local and international scientists can carry out research and we would also welcome our fellow researchers from Africa," said Michel in the statement.