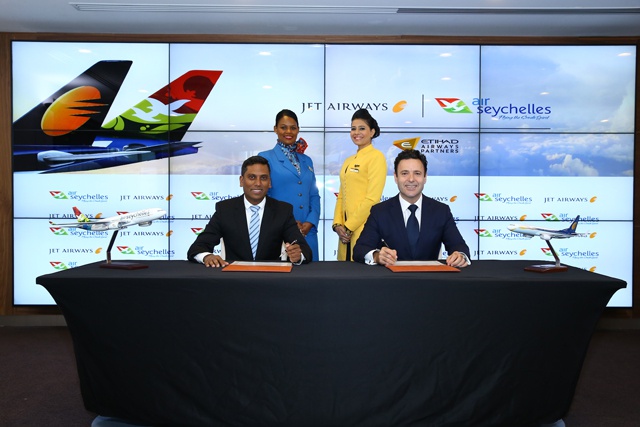 (Seychelles News Agency) - The outbound Indian tourism market, one of the largest and fastest-growing in the world, will now find the 115-island archipelago of Seychelles even more easily accessible now that Air Seychelles has expanded its codeshare agreement with India’s Jet Airways.

In a press statement released by Air Seychelles on Tuesday morning, the Seychelles’ national carrier will now offer codeshare flights to the Seychelles from five new major Indian cities; Bangalore, Chennai, Delhi, Hyderabad and Kolkata, in addition to the four existing cities of Ahmedabad, Jaipur, Kochi and Thiruvananthapuram which were first announced on May 5, bringing the total of Indian cities connected to Seychelles by the codeshare agreement up to nine.

Both Air Seychelles and Jet Airways are strategic partners of Etihad Airways. The Abu-Dhabi based airline giant bought a 40 percent equity stake in Air Seychelles in 2012 and announced a 24 percent stake would be bought in Jet Airways in November 2013.

“India is projected to grow into one of the world’s largest travel markets and, through our codeshare network with Jet Airways, we are better positioned to drive more tourism traffic to the Seychelles archipelago,” he said.

The additional codeshare destinations, particularly Chennai, are expected to also offer a more attractive choice to residents of the Seychelles travelling for medical treatment.

The Chief Executive Officer of Jet Airways, Cramer Ball, who was the CEO of Air Seychelles before he took up his position with Jet Airways in the beginning of 2014, said the expansion of the codeshare agreement would further strengthen Jet Airways’ partnership with Air Seychelles.

“Seychelles, with its beaches, coral reefs, nature reserves and rare wildlife has great appeal for travellers from India and we will continue to partner with Air Seychelles in enhancing connectivity to this region,” he said.

Air Seychelles re-commenced flights to Mumbai’s Chhatrapati Shivaji International Airport on December 3, 2014, a move which seems to be paying off for the airline’s aspirations to establish Seychelles not only as an idyllic tourist destination but also as a regional hub for travellers within the Indian Ocean.

However, now the national airline is being viewed as a potential hub for people from other regional destinations served by Air Seychelles such as South Africa, Tanzania and Madagascar who are now able to connect through the Seychelles to travel to India and vice versa.

Air Seychelles also codeshares on international flights operated by Jet Airways and Etihad Airways between Abu Dhabi and Mumbai, offering travellers an opportunity to combine a holiday to India or Seychelles with a stopover in the capital of the United Arab Emirates.

Tourism from India to Seychelles has seen a boom since flights to Mumbai began, and the Indian Ocean island nation has welcomed enthusiastic visits from Indian actors and celebrities, including ‘Aaja Nachle’ star Kunal Kapoor, who travelled to Seychelles in February to wed his fiancé Naina Bachchan in a romantic and secluded beach ceremony.

At the beginning of this month, Bollywood stars John Abraham and Shruti Haasan arrived in Seychelles to shoot scenes for their latest movie, Rocky Handsome.

So far this year, 2,706 visitors from India arrived in Seychelles, compared to 1,140 in 2014, according to the latest figures from the National Bureau of Statistics, representing an increase of 137 percent.

In total, the island nation welcomes around a quarter of a million tourists each year, and thus far 2015 has seen an increase of 16 percent compared with the previous year.