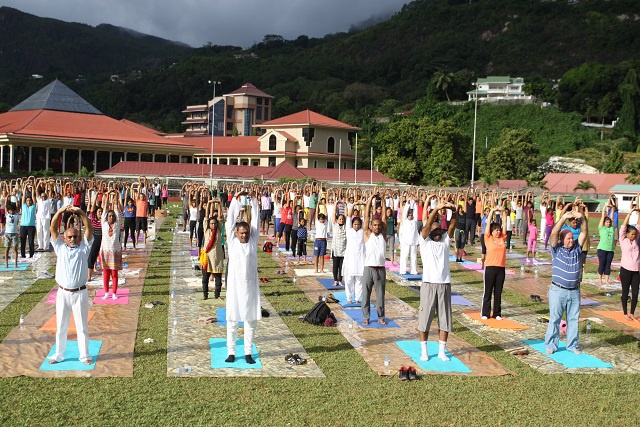 An estimated 500 people from the Seychelles participated in an open-air yoga session to celebrate the first International Day of Yoga. (Joe Laurence, Seychelles News Agency)

(Seychelles News Agency) - On Sunday, yoga lovers from 84 countries around the world simultaneously participated in an open-air yoga session that set a new Guinness World Record for the largest number of nationalities at a yoga event, and the tiny Indian Ocean island nation of Seychelles, with its population of 90,000 people, contributed to the spectacular feat.

“At no point in time has humanity needed yoga more than now when there is so much tension, so much anxiety, depression and the problem of terrorism.”

These were the words of the Indian High Commissioner to Seychelles, Sanjay Panda, during an interview with local media after the 33-minute open air yoga session held at the People’s Stadium in the Seychelles capital of Victoria on Sunday morning to celebrate the first-ever International Day of Yoga.

The event was the brainchild of Indian Prime Minister Narendra Modi, who is himself an avid practitioner of yoga.

The International Day of Yoga, and the attempt to break the world records, became part of a national drive to promote the ancient pre-Vedic physical, mental and spiritual practice throughout the world.

Modi first suggested commemorating a day of yoga in September 2014 at the United Nations 69th General Assembly. After having been endorsed by the UN the resolution was passed, supported by 177 out of the 193 UN Nations.

The activity was part of a worldwide coordinated and synchronised yoga session which was being held at the same time, using the same set of exercises.

Even the UN Secretary General, Ban Ki-Moon, participated in the event, which was celebrated throughout cities such as New York, Paris and London, as well as aboard Indian naval vessels out at sea.

On a ceremonial boulevard in New Delhi called Rajpath, most commonly utilised for the country’s Republic Day parade, almost 36,000 people participated in the event, including Modi himself, gaining another Guinness World Record for the highest number of people doing yoga at a single venue.

India’s NDTV documented the handing over of the two Guinness World Records to Indian government officials in New Delhi that same day.

Participating for harmony and peace

In Seychelles, the event, which commenced at exactly 8am, was promoted and organised by the Indian High Commission in Seychelles, which obtained the commitment of the Seychelles’ Minister for Tourism and Culture, Alain St. Ange, for support.

According to the organisers, Seychelles was among the first countries to support the event after India succeeded in getting the resolution passed at the United Nations.

In the Seychelles, an estimated five hundred Seychelles residents, comprised of local Seychellois and other nationalities, flocked to the stadium to experience the once in a lifetime opportunity of participating in a mass yoga event.

While yoga is not a mainstream activity in the Seychelles, the discipline is slowly gaining more momentum as the population starts to become increasingly health-conscious. There is a small but passionate local yoga association in Seychelles, and a local NGO, the Nature Seychelles Green Health Programme, holds regular open-air yoga sessions.

Celebrated under the international theme ‘Yoga for Harmony and Peace’, Indian Yoga Master Megha, who came to the Seychelles especially for this occasion, guided the participants from basic physical and breathing exercises to more extensive exercises culminating into a deep meditation.

Taking to the stand after the session, Minister St. Ange, who had himself participated in the exercises alongside other ministers and other government officials, said that as small as the island nation was, Seychelles’ name had been seen and counted in the community of nations.

“We came here, a few hundred of us, and together with the world, we mark the first International Day of Yoga and I do hope that it will not be the last, that more and more people will join, and that we will keep on practicing with the different clubs in Seychelles using yoga as a means to find ourselves,” he told the assembled crowd.

Henceforth, every year on the 21st of June, the world will celebrate the International Day of Yoga. High Commissioner Panda is a firm believer that Sunday’s event was an initiative not only to be observed once a year, but something which should be incorporated into one’s lifestyle, particularly as a physical and mental discipline for the youth.

Participants reported that the 33 minutes had been helpful in relieving stress and worries, with the exercises being invigorating for both the body and soul.

Other remarks stressed on yoga as a means of achieving internal peace and general sense of well-being.

“After this session I feel that I will experience a wonderful day today,” one participant told SNA. “I am glad we now have a day dedicated to this wonderful manifestation. I feel well, relaxed and at peace.  It’s been a really good session”.

Other activities to celebrate the International Day of Yoga in Seychelles included several other activities, including a talk about yoga by a panel of experts followed by videos and live demonstrations. An exhibition at the Vivekanand Yoga Club at the High Commission of India was also opened on the day and will remain open to the public.