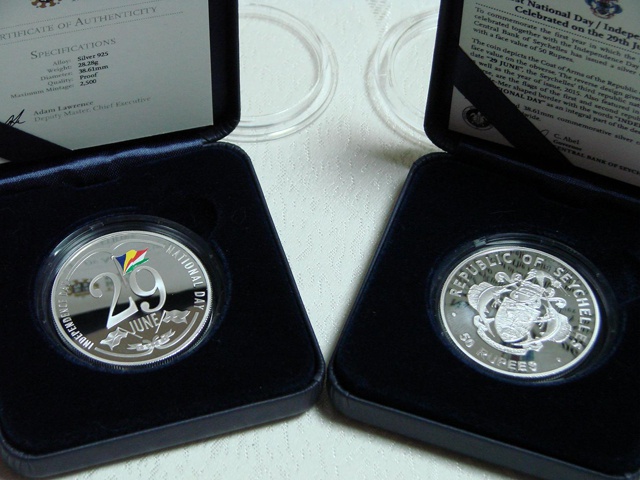 A new silver commemorative coin has been unveiled by the Central Bank of Seychelles to mark the first year that the Seychelles’ Independence Day will be celebrated on the same day as the National Day on June 29. The coin was designed in collaboration with five Seychellois artists. (Patrick Joubert, Seychelles News Agency)

(Seychelles News Agency) - A new silver commemorative coin was unveiled on Wednesday by the Central Bank of Seychelles to mark the first year that the Seychelles’ Independence Day will be celebrated on the same day as the National Day, on Monday, June 29.

Abel added that although the aesthetics of the coin were inspired by these five artists, the hard work of the Central Bank staff, as well as the National Day Celebrations Committee was essential in the creation of this unique legacy.

The coin, which has a face value of 50 Seychelles rupees (just under $4), is classed as a non-circulating legal tender - coins which are technically classed as legal tender, but are intended rather to be used as souvenirs or collector's items.

“The coin is one that is quite unique, in that all the elements of the coin portray the event itself, so we have the current flag, which has been designed and is printed in colour on the coin, we also have the other two flags from the first and second republics,” he said.

“Added to the design is a border in a coco-de-mer shape, and the words Independence Day and National Day. We’ve added the date, June 29, prominently in the centre of the coin, and below that we have added the year 2015.”

The coin itself will be sold to the public from Friday at the Central Bank of Seychelles, which has thus far minted 500 coins, while the total quantity that can be produced under order is 2,500.

Vice president Danny Faure, also the Chairman of the National Day Celebrations Committee was present at the ceremony and was presented with one of the coins.

The coin will be on sale for the price of 1000 Seychelles rupees (around $75) per coin, which will also include a presentation box and a certificate of authenticity.

During this year’s upcoming National Show, which opens this Saturday, the Central Bank of Seychelles will have a booth to showcase the coin and other products which are on sale. Members of the public will be able to order their coins at the booth and collect them at a later date.