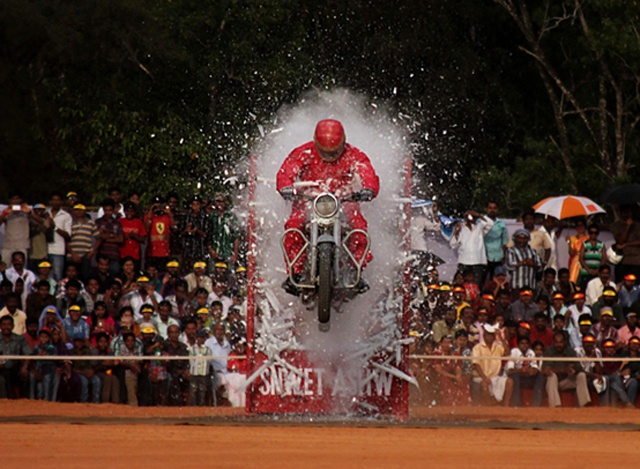 Spectators at this year's National Day parade are in for a treat, with participation from four countries this year (Indian High Commission to Seychelles)

Four countries are expected to take part in this year’s National Day parade on Monday, June 29 in the Seychelles, namely India, Australia, France and Mauritius.

2015 will mark the first year that National Day will be celebrated on June 29, which is the day the 115-island archipelago of Seychelles gained independence from the British in 1976.

National Day was previously observed on June 18, but this date has from this year been marked as Constitution Day to celebrate the adoption of the current constitution in 1993.

The National Day parade, which takes place at Stad Linite, a stadium situated at Roche Caiman on the outskirts of the nation’s capital of Victoria, has always been one of the most important public holidays on the Seychelles’ calendar of events.

The day traditionally sees widespread turnout among the population of around 90,000 people, and this year looks set to be no different despite the change of date.

The two days preceding National Day, Saturday 27 and Sunday 28 will also see many of the nation’s people flock to the National Sports Complex next to the stadium for the country’s National Show, where most businesses and organisations rent stands and showcase their products, services and special offers.

The visiting military and naval units taking part in the parade have already arrived and will be spending the final days before the event to prepare for the parade and interact with members of the public.

The Indian High Commission in Seychelles on Thursday announced the participation of its 25-member marching contingent and the acclaimed Indian Naval Band in the parade, arriving aboard the Indian Naval Ship (INS) ‘Teg’ on Friday.

The Teg is in Seychelles to carry out surveillance of the archipelago’s extensive Exclusive Economic Zone (EEZ), which covers almost 1.4 million square kilometres of the western Indian Ocean, and the stealth frigate will be open to visitors at Port Victoria on Sunday from 10am to 3pm.

One of the more spectacular and highly-anticipated displays will come from the Indian contingent; a Indian Army military police stunt motorcycle unit known as ‘Shwet Ashw’ (White Horse).

The 42-man motorcycle unit from Bangalore was flown in by a special military aircraft on Monday this week, and the Indian High Commission has promised a ‘never seen before’ stunt show for the National Day parade.

The motorcycle stunt unit, which has achieved two Guinness World Records, are scheduled to perform 30 minutes of ‘death-defying’ acrobatic stunts.

The parade will be led by the National Brass Band followed by platoons from the Seychelles People's Defence Forces, Police Force, Fire Brigade and the visiting foreign naval units as well as a series of youth marches and a cultural variety show.

The Australian High Commission based in Port Louis, Mauritius has also announced in a press statement the arrival of Australian Royal Navy Ship HMAS Newcastle at Port Victoria, visiting the Seychelles from June 25 to July 1.

The Australian High Commissioner to Seychelles, Susan Coles will also be present in the Seychelles for the National Day celebrations and has said she is “pleased and honoured” that an Australian contingent will be participating in the celebrations.