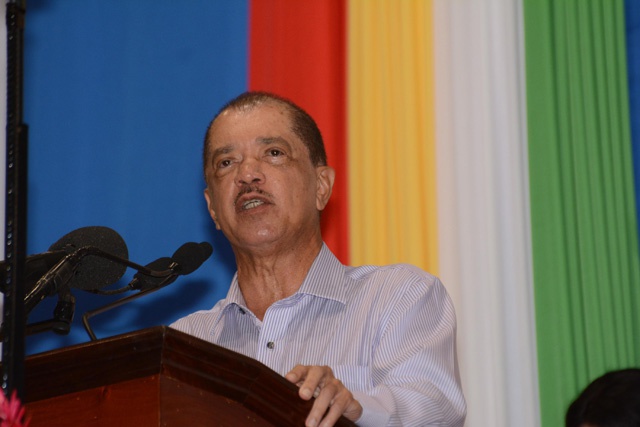 (Seychelles News Agency) - The President of the Seychelles islands in the Indian Ocean, James Michel, addressed the nation this evening at the Unity Stadium and on national TV as part of the Independence Day celebrations.

In his traditional address, the Seychellois head of state  spoke about new measures to encourage the Seychellois population of around 90,000 people to use renewable energy in terms of electricity use as well as transportation.

He announced that financial and technical support will be provided to families to install solar panels on their homes as of 2016, which will include providing subsidies to families based on certain criteria.

“It will also be compulsory for every new house and building to have its own solar panels installed. Here, too, a certain level of subvention may be applicable, depending on set criteria,” said Michel.

“With the same aim in mind, with effect from 15th July 2015, duty on all electric vehicles will be abolished. At the same time, duty on hybrid vehicles will be reduced to five percent. This measure will help promote our policy of clean and renewable energy.”

Michel also announced the government’s intention to involve the population more in governance and in decisions that concern their everyday lives of their community through a new bill which he said will soon be presented to the National Assembly.

“It will provide for every district to have a District Council which is directly elected by the residents of the district. This is yet another important step in the evolution and strengthening of our democracy.”

Michel also used the address to announce a number of measures and new initiatives, a few of which are geared towards greater environmental protection efforts.

The president has made known the government’s intention to impose a moratorium on large hotel projects on the Seychelles main inhabited islands of Mahé and the inner islands of the Indian Ocean archipelago of 115 islands.

This he said will take immediate effect except for projects “for which approval has already been granted, or for which a commitment had been made by Government.”

“A carrying capacity study, to be conducted with local and foreign expertise, will assist government in taking the necessary and informed decisions on all tourism development projects in the future. This strategy will create more space and opportunities for small hotels run by Seychellois,” said Michel.

A 13th cheque, or an annual pay bonus equal to one month’s salary for government sector employees who are not on a fixed term contract based on their performance as of January next year was also announced along with an almost $40 (500 Seychelles rupees) increase in retirement pension, effective as of December this year.

Pensioners who worked on the Royal Fleet Auxiliary (RFA) and other British vessels during the pre-independence period are also expected to benefit from financial support.

“My government is undertaking to provide them with some financial support in the form of an ex-gratia payment as from 2016. This is in recognition of their contribution. We continue to support them in their initiative to get assistance and compensation from the British government,” said Michel.

The President also announced new legislations and several incentives to encourage Seychellois to start their own small or medium sized business including activities linked to the blue economy concept Seychelles is promoting, as well as incentives that the government will provide to private sector businesses to encourage them to employ more young people who have completed post-secondary education.

Staying on the topic of education, it was announced in President Michel’s National Day address that the government has decided to extend the period of compulsory education from 10 years to 11 years.

Michel added that day-care support would be given to vulnerable mothers, who meet certain criteria, to ensure they are able to afford care of their children and return to work.

He also spoke of a new Government proposal to introduce a scheme where the Government pays 40% of the salaries of such young people who are employed by private companies for a period of one year, for salaries up to a maximum of SR7,000 ($ 535) a month, starting 2016.

Furthermore, the Government plans to offer loans for small to medium size enterprises wishing to enter into ocean-related business activities known as the Blue Economy.

The memory of Independence of a small island nation

Michel recalled the day the island nation became independent on June 29, 1976, which he described as a “glorious, joyful and historic moment.”

“At midnight on the 29th of June 1976, President James Mancham and Prime Minister Albert René – the two great personalities of the history of Seychelles, to whom we pay a special tribute tonight – saluted the new Seychelles flag as it rose slowly and proudly, while the Union Jack was lowered. A republic was born. A colony was no more. We, Seychellois, took our destiny into our own hands,” said Michel.

The Seychellois head of state went on to talk about the progress, achievement and transformation which the island nation has witnessed over the last 39 years since it gained its independence, and called on every Seychellois to look towards the future.

“Put our differences aside and strengthen our national unity. One country. One people. Let us continue our efforts to put right the wrongs of the past. But at the same time, let us appreciate the positive things that have happened and which have benefited our people as a whole,” he said.

“Let us recognise and appreciate all the benefits that we enjoy: the stability of our country, the peace that reigns within it, and our national unity. That's my message to all Seychellois today. A message of peace and unity. A message of love, compassion and solidarity. This is what will bring us toward greater prosperity.”