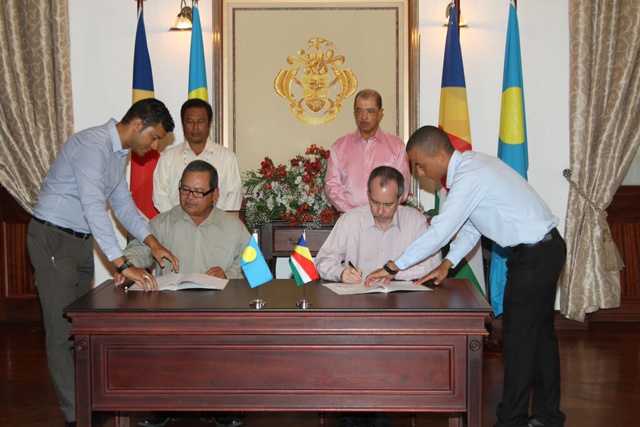 (Seychelles News Agency) - The island states of Seychelles and Palau are set on forging closer ties and strengthening their newly-established diplomatic relations.

The agreements were signed by the Seychelles Minister of Foreign Affairs and Transport Joel Morgan and Palau’s Ambassador to the United States of America, Hersey Kyota.

Kyota is part of the four-member delegation which the Palauan President Tommy Esang Remengesau is leading on his official visit to Seychelles.

The signing followed a tête-à-tête between President Remengesau and Seychelles President James Michel at State House in the Seychelles capital of Victoria, after which they were joined by officials of their two countries for further discussions.

Michel and Remengesau were the ones who called for the setting up of the Global Island Partnership (GLISPA) in January 2005 during the second International Meeting of the Small Island Developing States held in the neighbouring Indian Ocean island of Mauritius.

GLISPA is an open and voluntary platform for all islands and their supporters to work together to build resilient and sustainable island communities through innovative partnerships.

Both Palau and Seychelles are also members of the Alliance of Small Island States (AOSIS).

On his first visit to Seychelles, Remengesau was also the guest of honour at yesterday’s National Day Celebrations.

In a press statement issued by State House this afternoon following this morning's meeting, Michel described Remengesau’s visit to the Indian Ocean archipelago of 115 islands as "a historic milestone" in the relations between the two countries.

“His presence amongst us is not only an opportunity for him to share in our festivities, to share our joy and achievements as a nation, but also an occasion to celebrate and strengthen even further the strong island kinship between our two brotherly countries and between islands everywhere,” said Michel.

“This type of cooperation should be replicated in the Post-2015 era if small island countries or as we say ‘large ocean states’ are to benefit to the maximum from the implementation of the Post-2015 Development Agenda, the Sustainable Development Goals (SDGs) and the Paris Climate Change agreement as well as the SAMOA PATHWAY,” said Michel.

For the Palauan president, the visit represents an opportunity which will allow the two island nations to share experiences and learn from each other’s best practices considering they face similar challenges.

“…I am reminded that we share the same values; that the development of a nation rests on the benefits it can bring to the people and that sustainability is at the heart of our island nations. We seek to continue to bring the same message of island people to the world community and work together in close collaboration,” said Remengesau.

The Palauan President will leave Seychelles on Wednesday July 1.

During his stay, he is also paying close attention to restoration of eroded coastlines due to climate change in Seychelles which is a similar challenge faced by Palau. This is through visits to several sites in the Seychelles where such projects have been undertaken.

Palau consists of over 200 islands, out of which only eight are permanently inhabited. The western Pacific islands have a much smaller population size of only around 21,000 people when compared to Seychelles’ population of around 90,000.

Palau which is close to Southeast Asia has a rather mixed population of Malay, Melanesian, Filipino, and Polynesian ancestry. It is believed that its original settlers as early as 2500 BC were from Indonesia.

New Rwandan High Commissioner to Seychelles to focus on trade, investment and tourism