A unique memento of Seychelles: Palauan president goes home with coco-de-mer from Praslin 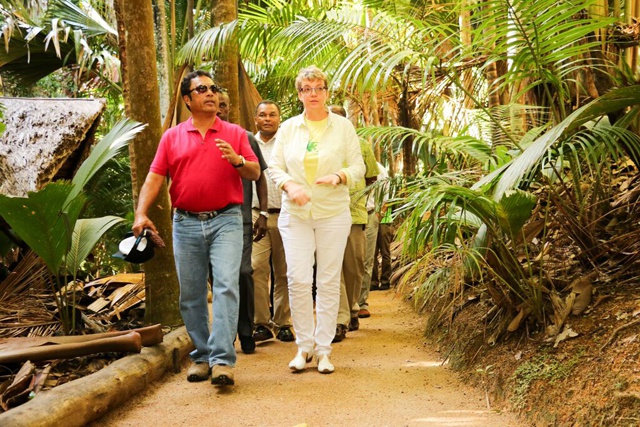 Taking a walk into the past: the President of Palau, Tommy Renegesau, walks a nature trail alongside Frauke Fleischer-Dogley, the chief executive of the Seychelles Islands Foundation, to find out more about what the Seychelles has done to preserve, study and protect one of its most unique and iconic symbols, the endemic coco-de-mer  (Romano Laurence, Seychelles News Agency)

(Seychelles News Agency) - A visit to the majestic national park of Vallée de Mai, declared a UNESCO world heritage site in 1983, is a memorable experience for many of the visitors who come to the Seychelles Islands.

Located on the second most populated island of the Seychelles, Praslin, the lush green forest filled with towering endemic palm trees gives the visitor an inkling of what the archipelago of 115 islands may have looked like before the arrival of its first settlers.

Amid its endemic palms grows the coco-de-mer palm tree, which produces the largest nut in the entire plant kingdom, weighing up to 30 kilograms.

The distinctively-shaped coco-de-mer nut carries with it various mysteries and legends, and some of these stories were shared over a leisurely walk through the Vallée de Mai’s trails, by Palauan President Tommy Remengesau and his delegation on Wednesday, the final day of his three-day official visit.

“All the nuts are very very different - all with their own signature...” the Chief Executive Officer of the Seychelles Island Foundations (SIF), Frauke Fleischer-Dogley told the Palauans.

Fleischer-Dogley also shared updates with the delegation about ongoing research being conducted in the Vallée de Mai by SIF, the public trust which safeguards the 19-hectare site.

After witnessing the hard task of de-husking one of the coco-de-mer nuts, the head of the delegation of Palau, President Tommy Remengesau told local media that he was very impressed with the conservation efforts on the island of Praslin.

“Coming from the Pacific and coming to the West Indian Ocean for the first time, you do have a paradise here! You have your own unique feature; coco-de-mer is one of the endemic species of life that you have here,” said Remengesau in an interview with SNA at the World Heritage Site.

But it’s not just the coco-de-mer that the Palauan head of state is going nuts over – he has been keenly studying what Seychelles has done in terms of sustainable development, and he uses only the most effusive terms of praise for his fellow small island state.

“I am going to carry back home the hospitality of the people here, the smiles, the values, the hard work ethic, the concern for preserving what you have and at the same time promoting it,” he said.

“This is the kind of networking and sharing of information and sharing of experiences that we all need throughout the world especially between island nations you know,” says Remengesau.

Remengesau arrived in the Seychelles on Sunday, where he was received as the guest of honour for the National Day celebrations on June 29, which this year marked the 39th year of the country’s independence from British rule.

During his three-day official visit, he also visited several sites on the most populated island of Mahé including the National Biodiversity Centre at Barbarons, some areas along the western coastline which have been affected by coastal erosion and also a modern housing development on the reclaimed island of Perseverance close to the Seychelles capital and main port of Victoria.

On Monday, Remengesau planted a coco-de-mer seed in the arboretum section of the biodiversity centre, and visited the Alley of Small Island Developing States, where a tree had already been planted in honour of Palau.

With a smaller population of around 20,000 compared to 90,000 in Seychelles, the President of Palau has been a voice in the international community for the effects global warming has had upon the islands of the South Pacific region.

Palau consists of over 200 islands, out of which only eight are permanently inhabited even after gaining its independence in 1994.

The two island nations signed a General Cooperation Agreement and a Short Stay Visa Waiver Agreement on Tuesday to allow bilateral cooperation between the two sides in several areas.

Both Palau and Seychelles are members of the Alliance of Small Island States (AOSIS) and they have been at the forefront of the setting up of the Global Island Partnership (GLISPA) in 2005, an open and voluntary platform that encourages innovative partnerships between Island States.