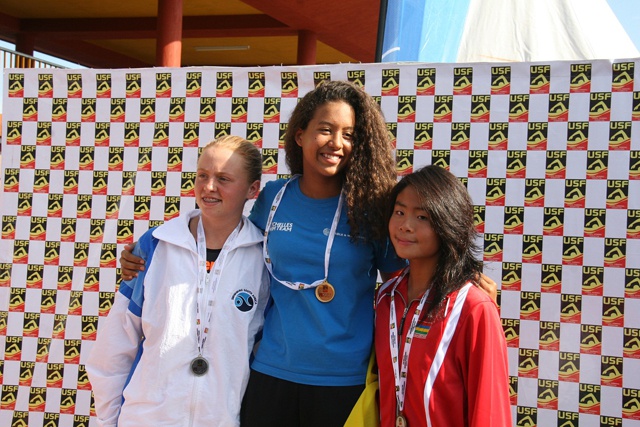 Passon who is participating in the 13-14 years category won a second gold medal of the competition this morning in the 50 metre backstroke event coming ahead of a Ugandan and Zambian swimmer respectively.

Speaking to SNA on the phone this afternoon from Uganda she said the race was tough but she was really happy to have won.

Passon who is accompanied by her mother Lydvine Passon, who is also an official representative of the Seychelles Swimming Association won her first medal in the very first event of the competition yesterday.

She snatched a silver medal after coming out second in the 800 metre freestyle event clocking 9m44.10s.

“It wasn’t easy, it was quite hard as I don’t normally do this event, but I was happy to come out second,” Passon told SNA.

Her second medal yesterday, also her first gold medal of the competition, came in the 15th event - the 100 metre backstroke race.

She clocked 1m08.90s to come out ahead of a South African and Mauritian swimmer who took second and third place respectively.

“It was also a really tough race as everyone’s timing was split seconds away from mine, but am happy that I won the gold,” said the young swimmer.

Felicity is the only Seychellois swimmer taking part in the 12th CANA Zone 3 & 4 short course swimming Championships in Kampala alongside swimmers from some 24 African countries.

So far she has taken part in 9 events and have 6 more competitions before the championship ends on Sunday April 27.

Passon has in fact been training in South Africa since February 13 and before her participation in the latest competition she managed to break 3 national records in all 3 events she participated in during the South Africa National Open Championships in Durban from April 7 to April 12.

Expressing her joy after she won 3 medals so far in the latest competition in Kampala, Passon said “the training has really paid off.”

After the Uganda event her next attempt to get the best results in her sport will be when she joins a Seychelles’ delegation of swimmers that will be taking part in the African Youth Games in Bostwana in May.