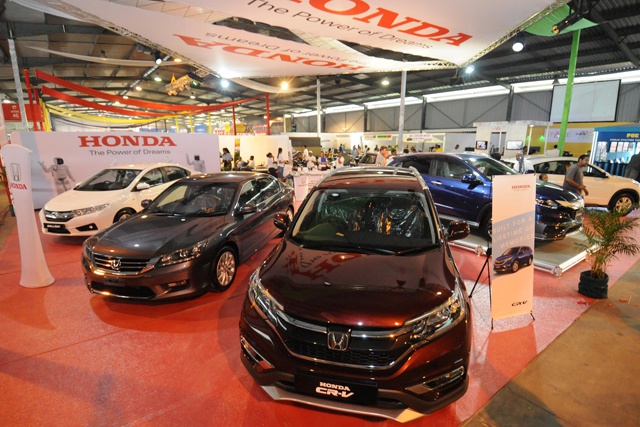 Luxury cars are becoming increasingly available in the Seychelles archipelago of 90,000 people. Pictured: a vehicle dealership displays its top-of-the-range cars at the National Show exhibition, held at the end of June (Patrick Joubert, Seychelles News Agency)

(Seychelles News Agency) - The Seychelles archipelago of 90,000 people has been accepted into an exclusive club of 83 nations on the World Bank’s ‘high income’ list.

The Seychelles, together with Argentina, Venezuela, and Hungary, have all graduated to the top earners list this year.

In a press statement issued on Thursday afternoon, the Seychelles President, James Michel, welcomed the recognition of Seychelles’ economic progress from the international institution.

“A combination of factors has enabled us to achieve this graduation, not least, the successful economic reform programme undertaken since 2008, the diversification of our economy and the growth of investment in tourism,” said President Michel, who had in June 2014 spoken publicly about the prospect of Seychelles joining the high-income group, which was reinforced by a US-based analyst’s report that this was ‘highly likely.’

“The hard work, resilience and innovation of the Seychellois people has brought results and we are committed to continue on this path. We have achieved this together, and if we all continue to work together we can achieve much more for our country and people.”

However, the president also took pains to point out that assessing a country’s wealth by GDP per capita alone was not always relevant, particularly when it comes to small island developing states (SIDS), which remain particularly vulnerable to external shocks and face their own unique development challenges.

The president reiterated a call he made in 2014 for more targeted support from the international community for SIDS through measures such as a vulnerability index, to allow small island states to adapt and build resilience against both climate change and economic shocks.

Seychelles, already at pains to access development and climate change adaptation and mitigation funding from the international community, could now see funding for such measures closed off.

"We have reached an income status equivalent to many OECD countries- but we don't have the same access to developmental tools including affordable finance as these countries have. As we recognise this milestone I call on all our development partners not to penalise us for our success," concluded President Michel.

Seychelles is top in Africa for GNI per capita

In 2012, the gross national income (GNI) per capita of Seychelles was calculated by the World Bank at $12,180 per year, which was already extremely close to the $12,736 upper limit of the ‘upper middle income’ classification, and Seychelles’ GNI per capita has increased to $13,990 for 2014.

As an assessment tool, the World Bank uses the GNI per capita method, which takes a country’s final annual income and divides this amount by its population to arrive at the average income per citizen. The GNI per capita model is also linked with other indicators that measure the social, economic, and environmental wellbeing of the country and its people.

With its recent accession to the World Trade Organisation, an upswing in tourism and steady progress towards ocean-floor oil and gas exploration, the Seychelles could soon be on the verge of even more when it comes to its domestic earnings.

According to the World Bank’s country profile on Seychelles, the island nation earned $1.4 billion dollars in GDP last year, with the majority of its income coming from tourism, fisheries and the offshore financial industry.

Seychelles is the second African country to join the ‘high-income group’ after Equatorial Guinea graduated in 2007.

The Seychelles is now sub-Saharan Africa’s top earner in terms of GNI per capita.