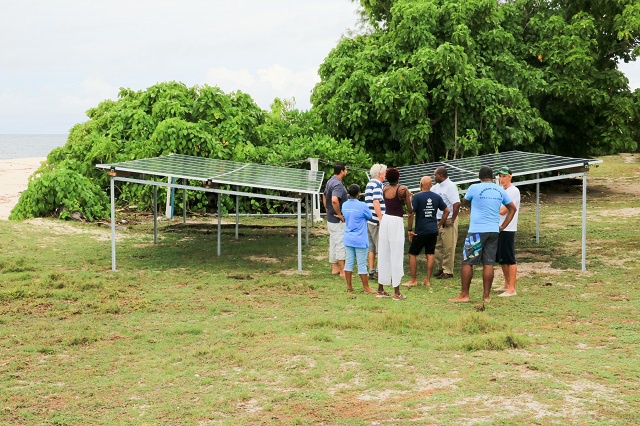 A nature reserve off the west coast of Praslin, Cousin island is living up to it's expectation as it goes all green with a fully solar-powered system. (Romano Laurence / Seychelles News Agency)

(Seychelles News Agency) - Reputed as an exquisite island sanctuary with a successful conservation record, where species such as the Seychelles warbler were nurtured from the brink of extinction, Cousin island special reserve, became the third island in the Seychelles archipelago in the western Indian Ocean to become fully solar-powered this week after its last diesel generator was switched off.

A small island, which was once a coconut plantation off the west coast of Praslin, the second most populated island of Seychelles, was rehabilitated and become home to rare bird species, and now it joins the Aldabra atoll and Aride island, in the Seychelles group of islands all relying on the closest star to the Earth for its energy supply.

Managed by Nature Seychelles since 1998, the island’s first solar system was installed in the year 2000. Ten years later, it became the first island and nature reserve to become carbon neutral.

This latest solar system is also another historical milestone for the island, according to Chief Executive Office of Nature Seychelles, Dr Nirmal Shah as it is the first project in Seychelles to be crowdfunded through a web based company called Indiegogo.

“Our target was 23 thousand dollars. We raised that, with a little bit of change over and above that, so we must thank all the people who gave small donations from all over the world because this is what crowdfunding is about…,” Shah rold SNA, adding that such massive internet campaigns are normally for commercial products.

Shah also acknowledged larger donations from UK based energy firm such as Utilita, an electrical engineering company E.V Bullens and the government of the United States through its embassy in Mauritius.

Going solar all the way

Located on the flattest area on the small island of 27 hectares of land, the photovoltaic solar system is conveniently close to the research centre building on the island where the batteries and inverters are located.

“This system is slightly different because it is centralized. It is like having a centralized generator that then distributes it to the island. On Aride, we have inverters in the different rooma which then feeds power into the grid. It is just slightly different way of doing it. It’s slightly cheaper and at times it is more efficient…,” says Tim Kirkpatrick, owner of Climate Caring, who installed the solar system after working for months to source the parts from around the world, and also partnered with Nature Seychelles to launch the crowdfunding online campaign.

According to Kirkpatrick, at its hottest days, the island produces over 6 kilowatt of electricity which matches the electricity consumption of the island and its eight permanent human inhabitants. He also estimates that the second generation system, with good maintenance, should work perfectly for 20 to 35 years.

As the loud noise of the generators is finally silenced leaving the feathery inhabitants, mainly the important colony of seabirds to sing their hearts out, the human population can finally enjoy the luxury of having electricity on a 24 hour basis.

The staff live in small houses scattered over the beach front of the island. 24 year-old ranger Christopher Mahoune has lived on Cousin island for the past four years and he describes the ordeal of carrying diesel from Praslin, a boat trip of almost 15 minutes and the tedious task of beach landing in the South East monsoon with their precious cargo.

“When we had diesel on-board we were always mindful but in any case we had to land one way or another…,” says Mahoune to SNA. He notes happily how simple tasks, such as charging electronic devices like mobile phones and laptops, are now much easier.

Whilst the eight permanent staff of Cousin Island Special Reserve relish in the convenience of their environmentally-friendly electricity, the solar trend is expected to spread to other populated islands of the archipelago as well.

According to the Seychelles Minister for Environment, Energy and Climate Change, Didier Dogley, soon his ministry will be launching a renewable energy project for companies to provide at least 5 megawatt electricity for the archipelago’s most populated island of Mahe.

Dogley says when this is completed it will be a big step forward towards reducing the Indian Ocean islands fuel consumption although he adds, “if we can convert the current of the sea into renewable energy this will be the ultimate solution for Seychelles!”

“Within one year from 2014 to 2015, we have seen 2.5 per cent uptake of renewable energy and the target is by 2030 to have 15 per cent but if we go at this rate we probably will hit that target before 2020…” said Dogley, after he switched on the solar system on Cousin island in a ceremony on Wednesday.

Two days earlier, on the Seychelles National Day, June 29, the islands’ President James Michel announced in his traditional address, new measures to encourage the Seychellois population of around 90,000 people to use renewable energy in terms of electricity use as well as transportation.

He announced that financial and technical support will be provided to families to install solar panels on their homes as of 2016, which will include providing subsidies to families based on certain criteria.

“It will also be compulsory for every new house and building to have its own solar panels installed. Here, too, a certain level of subvention may be applicable, depending on set criteria,” said Michel.

“With the same aim in mind, with effect from 15th July 2015, duty on all electric vehicles will be abolished. At the same time, duty on hybrid vehicles will be reduced to five percent. This measure will help promote our policy of clean and renewable energy,” he said.

Seychelles recently introduced an incentive to encourage the use of renewable energy through the financial rebate scheme which allows small businesses and private dwellings to invest in photovoltaic systems at a financial rebate of 35 per cent on installation.