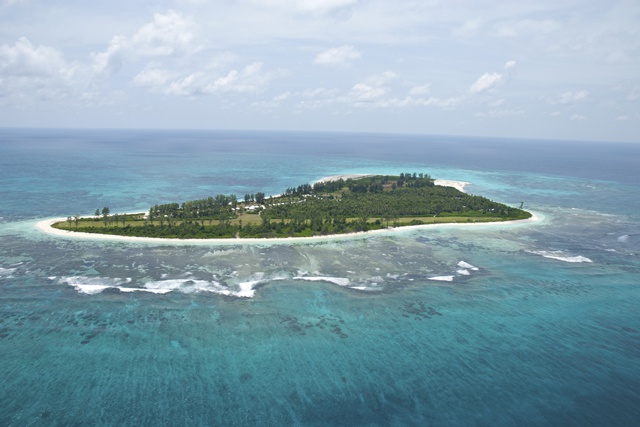 the 0.7 kilometre-square coral island known as Bird Island, situated almost a hundred kilometres to the north of the Seychelles main island of Mahe, is a haven for dozens of different species of seabirds (Gerard Larose, Seychelles Tourism Board)

About a month after Cable News Network (CNN) International producer Brooke Bowman was discovered by SNA filming in the Seychelles islands, the fruit of their labour has been aired on the popular international news channel.

The television programme ‘Inside Africa’ has thrown the spotlight on the Seychelles archipelago, producing three segments on various conservation endeavours taking place on islands further afield from the more commonly-visited ones.

One of the segments, entitled ‘On this island, the birds are in charge’, covers one very unique island in a very remote location which is trying to protect and restore a precious ecosystem.

As green as a lone emerald set against a dazzlingly blue backdrop, almost a hundred kilometres north of the Seychelles’ main island of Mahe, lies the northernmost of the Indian Ocean archipelago’s 115 islands - Bird Island, the small coral island to which over a million migratory seabirds flock each year.

Fewer humans by far traverse this path. Only a negligible number of the Seychelles’ 90,000 inhabitants and only a handful of its almost quarter of a million annual tourists come to this private island, and unlike the birds which come from the northern hemisphere, the human visitors mostly travel north from Mahe, situated to the south of Bird.

The CNN crew documented how the island’s majority population - the seabirds - live in harmony with tourists, and not only does it seem that the visitors are tolerated by their feathered friends, but also appreciated.

Alex Savy and his family took over the private island from his father Guy, who bought it in 1967. The island had suffered the ravages of the coconut plantation era, and needed careful rehabilitation to restore it to what it is today - a nature reserve that protects the endangered seabirds and sea turtles which come here to breed.

“We take it for granted that the birds come within two metres of you, and in fact what we’re trying to tell sometimes to people is that it’s as if the birds have found out that by being close to us they are really safer than when they are not close to us,” he told the CNN crew.

“Sometimes you’ll find more birds around your chalet than you will if you go in the garden. They’re everywhere, and it’s as if generations of them have found out by now that nobody’s going to hurt them here, so they come even closer. They come on your table when you’re having breakfast, they come in your room, they come and sit on your balcony.”

Alex and his family also manage the tiny lodge which caters to the island’s visitors. With just 24 simple chalets with no access to television, phones or air conditioning, the lodge is not suited to every traveller’s tastes, and that’s just how the Savys want to keep it.

“It changes the whole concept of your place, the moment you start going down the line of aircon,” he explained. “It changes your client, by the way, because the client which accepts no aircon is a client who also accepts nature.”

Visitors can roam around the island freely and interact with nature.

“The client has gone through a lot of rules to get here… airports, travelling, it’s getting more complicated... he comes here, [to a place with] the least [amount of] rules, [like] how you dress, what do you do… I think that concept of freedom for me is very important.”

Bird Island’s conservation officer Roby Bresson has been watching over the flocks for the past eleven years, and it is his responsibility to ensure the conservation of the up to 35 different species of birds which can be found on the island at various times during the year.

“When I came here, the white-tailed tropicbird, there were a pair. So from a pair to 89 pairs within 11 years, it’s extraordinary,” he said, explaining how he had been researching the birds’ behaviours, including their breeding and feeding patterns and documenting his findings over the years.

Roby has been painstakingly documenting all his research over the years, watching successive generations of birds return to the island to start their own families.

“I mean, I’m not just a ringer, I follow my birds, right from day one… how can you not be proud?”

Despite Bird Island having been an ecotourism destination for more than 40 years, the harvesting of sooty tern’s eggs, known locally as dizef zwazo, still goes on today on Bird Island and on other seabird nesting islands such as Desnoeufs. The eggs are considered a delicacy among both locals and tourists alike, but concerns were raised last year by British ornithologist Chris Feare as to the long-term sustainability of the harvesting methods.

The other two segments produced by the CNN crew investigate a reef restoration project on the special nature reserve of Cousin Island and a biodiversity project undertaken by volunteers to collect vital research on rare endemic species to the islands.

According to the Seychelles Tourism Board, CNN will be repeating the three programmes on air Wednesday, June 8 at 04h30 GMT (07h30 Seychelles time).