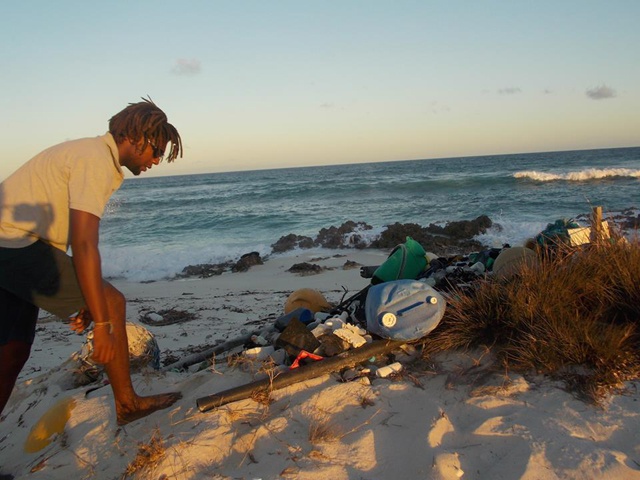 Cleaning up someone else's trash - rangers on the remote coral atoll of Aldabra, which is a UNESCO World Heritage Site, have to contend with the mounting problem of sea trash on the shores of paradise (Sheril Decommarmond, Seychelles Islands Foundation)

(Seychelles News Agency) - On one of the most remote and unique island atolls on earth, there shouldn’t be anything on the beaches but crabs scuttling back and forth, disturbed occasionally by sea turtles coming ashore to lay their eggs.

But increasingly, conservation rangers from the Seychelles Islands Foundation based at the Aldabra research outpost have to deal with a worrying problem: swathes of plastic sea trash washing up on the UNESCO World Heritage Site’s shores.

During the southeast monsoon, the warm equatorial trade winds reverse direction and blow rather gustily between the months of May and September in the Seychelles, bringing a welcome drop in humidity levels despite the rougher seas.

On the southern beaches of Grande Terre, the largest island in the raised coral atoll of Aldabra, situated over 1,000 kilometres from the granitic inner islands where the majority of the Seychelles’ 90,000 inhabitants live, these months pose a huge challenge to the handful of SIF rangers and researchers stationed on the island as the beaches become littered with marine debris, posing a threat to wildlife both in and out of the water.

Debris is ‘more than we are able to remove’

The SIF’s scientific coordinator on Aldabra, April Burt, told SNA in an email interview that although marine debris is washed up on to the beaches of Aldabra year-round, the south-east coast of Aldabra gets bombarded during the south east monsoon months with a higher density of marine debris than at any other time of the year.

As for the actual volumes, it is not yet known exactly how much washes up during the monsoon season, but Burt describes it as an “astounding amount”.

“As you can see from the pictures the build-up of debris is extensive and more than we are able to remove due to logistical constraints,” she told SNA.

“Large-scale trash removal projects on the south coast of Aldabra are logistically very complicated due to the volume of the debris and the difficulties in access to remove it,” she said. “All Aldabra's waste gets separated and transferred back to Mahé for appropriate disposal so the cost of collecting and disposing of sea trash is an extremely expensive operation.”

Flip flops are the most common item to be seen, followed by plastic barrels and containers, fishing buoys, plastic bottles and small, partially-degraded bits of plastic.

A danger to marine life, birds and turtles

According to Burt, marine debris poses a threat not only to the unique fauna and flora of Aldabra but to all marine life, and the ingestion of small pieces of plastic by birds, sea turtles and other animals can result in death as their stomachs slowly fill up with indigestible plastic, although she noted that this particular scenario had not yet been documented on Aldabra.

“Marine debris such as lost fishing equipment can get entangled both in water and on land, smothering plants, corals and even animals,” Burt told SNA. “Recently the team found an adult green turtle entangled in a buoy with trailing ropes, luckily they were able to free the animal and remove the debris from the sea.”

Even more concerning, however is the stage where the plastic debris gets broken down to such a state that it forms tiny particles which are barely visible, which are impossible to remove from the natural environment as the larger pieces are.

“These particles pose a far greater threat to the ecosystem and to humans by their sheer abundance and range,” she said. “As well as being ingested by key organisms the microplastics are also responsible for the transfer of chemical contaminants into the marine environment. These contaminants are now being shown to enter the human food chain as people ingest fish that have themselves ingested plastic.”

Majority of sea trash comes from other countries

The rangers on the Aldabra atoll are not alone in facing the mounting challenge of cleaning up the floating trash; all of the outer coral islands are affected by the problem.

Aurélie Duhec, who has worked as a conservation officer on a number of the Seychelles’ outer islands managed by the Island Conservation Society (ICS), led a recent study on the composition and possible origins of marine debris which washed up on the remote Alphonse atoll, situated roughly halfway between the main Seychelles island of Mahé and the archipelago’s most southerly atoll of Farquhar, where Duhec is currently stationed.

Her study calculated the ability of each type of trash to be pushed along the ocean by the wind depending on its shape and buoyancy.

“An empty PET bottle is very buoyant, it is floating on the surface, so it will be primarily transported by the wind rather than the surface current of the ocean, [therefore] it is a ‘high windage’ item,” she explained. “At the opposite [end of the scale] a glass bottle full of water will sink and it has no windage but in the paper it is classified as ‘low windage’ for simplification.”

The research model used, which calculated regional wind patterns effectively identified Somalia and its neighbouring countries as the largest potential source of land-based debris, with other marine trash coming from possible Asian sources such as Indonesia and India, but cautioned against pointing fingers of blame at any particular country.

“We do not want to accuse Somalia since we did not verify that the items are coming from there,” she said in an email interview with SNA. “The model give us a prediction of what an object would likely do if release from this country and help us to hypothesize that every kind of object of any kind of shape has a high possibility to make the route to Alphonse.”

Currents pushing trash all the way from Asia

Although Duhec is certain that the inner islands are impacted similarly by floating debris from surrounding countries in the same way, she says that the low windage debris, such as plastic bottle caps, toys, hangers and fishing nets released from south-east Asia would have a greater impact on the outer islands.

As for the most common item of all found on Seychelles’ white sandy beaches – flip-flops – Duhec believes they too originate from south-east Asia.

“I can observe now based on Farquhar that we have a much larger amount of fishing nets and small fragments than on Alphonse,” she told SNA.

“For the Aldabra Group situated on the west side of the Northern part of Madagascar they will be affected by more items coming from Madagascar,” said Duhec.

“The major current transporting the marine debris in the south of Seychelles is the South Equatorial Current and during the SE trade wind season it is even closer to the Seychelles… winds blowing strongly are driving the high windage items northwards, that’s why most of the items are washed up during this season in the outer [islands].”

Fishing vessels as a source of sea trash

Both Duhec and Burt have noticed a wide range of fishing equipment washing up on the outer islands, including fishing lines, nets, buoys and the ever-pervasive threat posed by Fish Aggregation Devices (FADs), but it’s not only fishing equipment – Duhec has reported plastic bottles from the Seychelles, thought to have been discarded overboard by fishermen in the region, to have washed up on the outer islands.

“I think they were coming from boats, because plastic bottles would have been driven by the wind and during the time of the season the winds were blowing from south-east to north-west, so they could not have come from Mahé,” she told SNA.

“Actually, on Farquhar we are heavily impacted by items thrown overboard, [as well as] large pieces of PVC plastic sheeting used to package goods during the transport aboard ships, and we find also a lot fishing nets and fishing buoys.”

ICS last year highlighted the increasing problems their teams encountered from FADs, and the devices, often constructed from old fishing nets are also causing an impact on Aldabra.

“FADs are sadly quite a common sighting around Aldabra, both washed onto beaches and at sea where they are entangled around the reef,” said Burt. “We are starting to collect data on any FADs encountered in the hope of highlighting their prevalence as ocean trash which may help in better future management of these devices.”

Helpless in the face of a global problem

Although it seems that a tiny developing island state is powerless to prevent its pristine and jealously-protected natural resources from being polluted by other nations, both Burt and Duhec believe that every effort to reduce our consumption of plastic – and responsibly dispose of what we do use – counts a great deal.

“Ineffective waste disposal and over consumption should be addressed as a global issue, one that affects us all,” Burt told SNA. “It is often the case that under-developed countries have ineffective ways to deal with trash or simply too much trash to deal with effectively. Awareness and education, along with financially sustainable strategies to deal with the issue are the most likely solution and support should be provided to countries that have trash issues.”

According to Burt, the Seychelles is starting to increase its own awareness of this issue but says further education on the impacts of littering and trash would still be beneficial to all because “waste disposal is still viewed very casually by many”.

Duhec echoed these sentiments, adding that beach clean-up exercises were powerful educational tools to better understand the effects of these items on the archipelago’s beaches.

“But the very first source of the problem is the plastic itself. It is very useful in our daily life, but almost all kinds of plastic are not recyclable,” Duhec said.