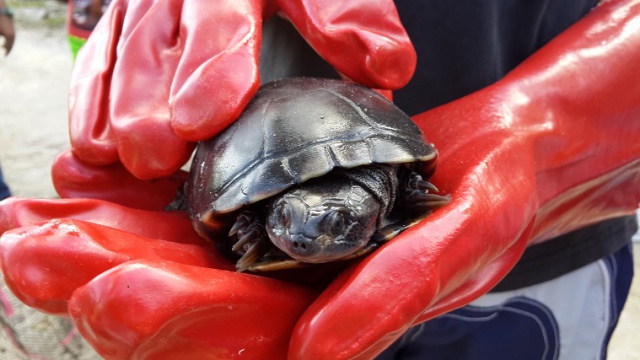 Another chance at survival: ahead of the imminent arrival of heavy-duty machinery which will put them at risk, the freshwater turtles of Seychelles were recently evacuated from the marsh of L’Union Estate on La Digue, the third most populated island of the archipelago. (Seychelles News Agency)

(Seychelles News Agency) - It’s a classic example of Seychellois citizens working together to save critically endangered creatures on the Seychelles third most populated island of La Digue.

As L’Union Estate, a heritage site on the island, gears up for an upcoming bridge construction project across its wetland area, the archipelago’s environment ministry has teamed up with school children on the island to save two endemic subspecies of freshwater or mud turtles.

La Digue is famed for its laid-back way of island life, where its three thousand or so inhabitants and visitors to the island move around in traditional ox-carts or on bicycles and also for its rarely-seen iconic bird, the Paradise Flycatcher.

Less well-known but equally important, however, is the island’s population of freshwater turtles.

Situated some 45 kilometres from the main island of Mahé, and spread over an area of some 10 square kilometres, La Digue is believed to be home to the largest concentration of the Seychelles black mud turtle (Pelusios subniger parietalis) and the Seychelles yellow-bellied mud turtle (Pelusios castanoides intergularis), both locally known in the Creole language as ‘torti soupap’.

It is thought that these tiny, rather dull-coloured turtles may have originally been introduced to the Indian Ocean archipelago of 115 islands hundreds of years ago from the African continent or the neighbouring Indian Ocean island of Madagascar as a source of food for slaves.

Populations of these mud turtles were known to exist on a number of the granitic inner islands of the Seychelles, including Mahé, Cerf, Praslin, La Digue, Fregate and Silhouette.

In recent years, various population estimates of the yellow-bellied and the black mud turtle have shown a decline in existing population associated with reduced lowland marsh areas, pollution or predation. Both species feature on the International Union for Conservation of Nature (IUCN)’s Red List of Threatened species.

On La Digue, however, quite a significant population is thought to still remain.

“We do not know the exact population on the island, but nevertheless we know that its low-lying plateaus and marshes have been successful breeding grounds for these two species,” environmental consultant Perly Constance told SNA in an interview.

The area having been badly affected by flooding due to heavy rainfall in recent years, the Seychelles Ministry of Environment had already built a bigger bridge further away at the island’s main landing site of La Passe earlier this year.

With its high influx of seawater, the freshwater turtles were not seen at La Passe but at L’Union Estate, things were different.

Finding that there were more turtles than anticipated, a representative of the Seychelles Ministry of Environment, Jean-Claude Labrosse, told SNA that the ministry was “concerned”, although he reasoned that the bridge needed to be built to increase the flow of water towards the sea for the approaching rainy season.

With the clock ticking, the fate of the freshwater turtles at L’Union Estate, La Digue was decided: the tiny creatures would be moved to a temporary location for their protection, but, first they had to be caught; a task that would prove no mean feat for their human protectors.

The old trick of bait trapping

Using baited fish traps laid throughout the marshes of L’Union Estate, Perly Constance with the help of workers from the Ministry of Environment on the island had to patiently lie in wait for several days.

After almost a week, the catch proved fruitful, with 15 turtles caught, a number which Constance estimates is around 80 percent of the total number present in that wetland.

“We are removing some… not all, some, but this is important for future populations… the rest will probably move away or will be caught during construction,” said Constance in an interview to SNA, adding that those caught would be moved to a temporary home.

As expected, the larger yellow-bellied mud turtles were the most commonly found in the traps and it was up to twenty secondary school children volunteering their help to record the gender, height, weight and other details of their ‘captives’.

Afraid and confused, the Seychelles black mud turtles, with their darker carapaces, were clearly agitated as the children’s gloved hands carried out their data collection duties.

Alex Jacques, a fourteen-year-old student of La Digue was already well-versed in the identification of the two subspecies.

“One is just smaller than the other… but the smaller ones are fierce, they have long nails that can easily scratch you,” said Jacques. “If Diguois knew about how close we are to losing this unique species then maybe they would be more cautious.”

Several other by-catches such as tilapias and crabs were caught and released back into the marshes during the activity, much to the delight and fascination of the school children.

A possible bastion for freshwater turtles?

Throughout the activity, Constance shared his knowledge on the identification of the two endemic species and their behaviour to the children with the hope that they in turn would be interested in saving them, perhaps by creating a school club devoted to their preservation.

Having worked in 2011 on a similar ‘catch and release’ project at Domaine de L’Orangeraie, a luxurious hotel at La Passe, Constance seems to be the local expert in freshwater turtles.

“When the hotel was being re-constructed, we removed most of the turtles to a temporary location… while the machines were digging up the marshes, we inspected each heaps of sediments removed so that we could save maximum of them,” explained Constance.

After over a year of feeding and caring for the turtles in captivity, Constance told SNA that once authorities were sure that the marshes have been restored and that they will not be disturbed again, they were released.

“We released 37 terrapins and now the population is over 80. We have quite a lot of Pelusios subniger parietalis and that is encouraging,” said Constance, adding that the guests of the hotel are now able to feed the turtles and see them in large quantities in one place.

In spite of similar efforts to save the freshwater turtles including programmes to breed them in captivity or reintroduced them in other islands of the Seychelles such as Silhouette, in 2003, the Seychelles black mud turtle or Pelusios subniger parietalis was declared as critically endangered by the International Union for Conservation of Nature.

Stephan Germain,a conservation officer for the Ministry of Environment, showed SNA a recent addition to the rescue operation - a rather dehydrated and small black mud turtle which remained curled up in its carapace after being found motionless by a passer-by on the paved road of La Passe.

This lucky one, no bigger than a fist, was the last to be released into an enclosed pond.

Harboured by the ‘gro ros’ or the big rock of L’Union Estate, widely recognised as a landmark of La Digue on the old island plantation, the turtles will be well protected from harm’s way as the construction equipment moves in within the next few weeks to pave the way for a bigger bridge and a wider pathway by which rainwater can flow off the island.

“We are lucky to have found this one and we hope people will bring many more,” said Germain, as the children urged it to swim with the others.

Long after they had released the turtles, both children and adults remained around the pond, waiting to see their precious turtles coming up for air.

The pond has been chosen as it has all the prerequisites for a ‘good’ temporary home including large influx of freshwater and food such as other invertebrates, small fish, amphibians, fruit and plant material that the terrapins will be able to feed on.