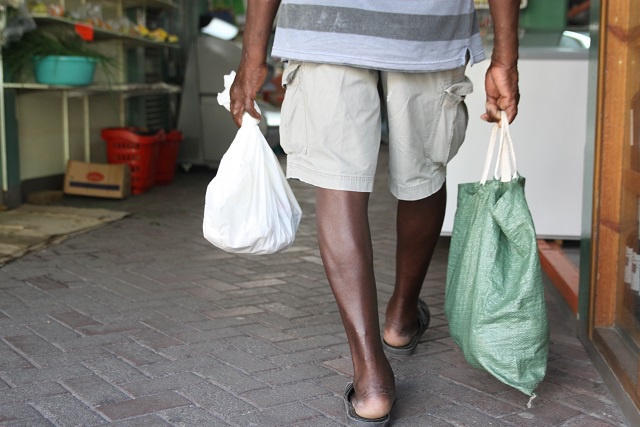 Encouraging the Seychellois population to switch from plastic bags to other alternative means that do not impact negatively on the environment - that is the aim of a youth-led NGO in Seychelles as part of their campaign for a Seychelles free from plastic bags. (Joe Laurence, Seychelles News Agency)

(Seychelles News Agency) - A Seychelles free from plastic bags! That is what a group of young people living in the tiny Indian Ocean archipelago of 115 islands would like to see in the future.

SIDS Youth Aims Hub (SYAH) – Seychelles has embarked on a new campaign aimed at encouraging the archipelago’s population of around 90,000 people to move away from the practice of using plastic bags and opt for reusable bags instead, which are more sustainable and environmentally friendly.

The youth-led not-for-profit organisation brings together young people aged between 16 and 30 years old who believe they can make a difference.

The group is in fact part of a wider regional NGO, SIDS Youth Aims Hub, launched in Mauritius in May last year which brings together young people from Small Island Developing States in the Atlantic and Indian Ocean as well as the Mediterranean and South China Seas.

The network was established to encourage young people from small island nations to exchange ideas, particularly when it comes to issues relating to sustainable development.

An idea is born

The idea to try and promote 'a Seychelles free from plastic bags' was born after the item continued to be a common feature seen by the youths during their regular beach cleaning and hiking activities organised since the beginning of the year.

“The beaches, mangroves and rivers are as polluted as ever before and more than ever before our nation have become dependent on plastic bags, so much so that it can even be described as being part of culture,” Karine Rassool a member of the SIDS Youth Aims Hub – Seychelles, told SNA in an email interview.

As part of their project SYAH- Seychelles has undertaken a survey across the three main populated Seychelles islands of Mahé, Praslin and La Digue getting people’s views on how they use plastic bags and their attitudes vis-a-vis the idea of not using them.

“There remains a lot of data analysis as surveys were carried out on Mahe and La Digue but the analysis on Mahe so far have shown that the majority of people (89 out of 100) have stated that they would be happy or be indifferent if a ban on plastic bags is announced. The resistance relates mostly to means to carry fish and use of plastic bags as bin liners,” said Rassool.

“People are scared to step out of their comfort zone. One backlash received...was the lack of an obvious alternative for carrying fish. However, I firmly believe that come the day there is a ban on plastic bags where we are forced to innovate, we will find an alternative. We will not stop buying fish because there are no plastic bags, instead we may make use of ‘gunny bags’ which are washable and reusable to transport our fish.”

The pro's and con's of plastic bags

Cheap, convenient, waterproof and always available, plastics are found to be quite useful in everyday life, however, most plastics are not biodegradable. Research even suggest it can take at least 500 years for plastics to photodegrade into smaller but more harmful plastic pieces.

For Seychelles, being a small island state with very little landmass to accommodate waste disposal, the item can surely pose a threat to the islands' natural beauty and the health of the Ocean.

Often dubbed ‘the cancer of the earth’, plastics is the latest concern for environmentalist due to the threat they pose to sea creatures either through indigestion and entanglement; damages evaluated to a staggering worldwide annual amount of $ 13 billion.

Some countries such as Rwanda, Somalia and islands nations such Rodrigues and Madagascar have gone as far as to ban the use of plastic bags while others including neighbouring Indian Ocean Island, Mauritius and the Comoros have pledged to follow suit.

Concern on the matter at hand is not new to Seychelles, as the archipelago’s environment ministry came up with new measures back in 2008 to regulate the import of plastic bags.

“We introduced a regulation with regards to flimsy plastic bags which is still being enforced and today our department and Seychelles Bureau of Standards are still ensuring that weak and thin plastic bags do not go onto the market. They should be above 30 microns,” the outgoing Director General for Wildlife Enforcement and Permit, in the Ministry of Environment, Energy and climate Change, Flavien Joubert, told SNA in an interview.

According to Joubert, it is quite difficult to know the exact amount of plastic bags used in the country while it is evident that the use of the item rises as trade increase.

The Seychelles Land Waste Management Agency (LWMA) the agency responsible for the disposal of waste in the archipelago also told SNA that the amount of plastics used in Seychelles cannot be quantified as all municipal, commercial and other types of waste are mixed up together due to the fact that the islanders do not sort out their waste.

Both SYAH-Seychelles and the environment ministry believe that people need to be continuously encouraged to used alternative means of carrying things around.

Some companies and businesses already have reusable bags on sale although they are a bit more expensive that the usual plastic bags. In line with their campaign SYAH-Seychelles is using funds raised as well as sponsorship from local businesses and other organisations to purchase re-usable bags that could be sold in shops for a small fee.

The group is also partnering with other groups such as the Association of people with Hearing Impairment, the Seychelles Prison and other local entrepreneurs to help sew locally made re-usable bags.

“We also have this new idea! Similar to cigarette packaging having the dangers of smoking visibly shown we are thinking of having stickers or posters at checkouts in shops so people are continuously made aware of the effects of plastic bags,” said Rassool adding that they are also working on educational and promotional materials which will be available for schools in the country.

What do people really think about the plastic bags debate?

It is evident that people are quite aware of the effects that plastic has on the environment but that the practice of having a bag they can use repeatedly is not that the majority is adopting.

“I prefer to use my cloth bags rather than plastic bags because it more economical for me as I don’t have to buy one or more plastic bags each time I go to the shop,” was the response of a middle-aged woman to SNA.

Another interviewee supports the idea of a total ban although she admits one needs to get used to the idea.

“Reusable bags are good but not as practical as plastic bags, it is not that popular to have the choice of re-usable and plastic bags when you are at a shop counter….,” she says.

Others think plastic bags are simply cheaper and more convenient.

“I don’t find it practical to be walking around with a cloth bag. A Plastic bag is more convenient and very accessible, never mind paying for it!”

Towards a sustainable management of wastage

Biodegradable bags and paper bags are also some proposed alternatives which local entrepreneurs have tried to invest in, but these are often more expensive than plastic bags.

“While it is important that we brainstorm on alternatives to plastic bags, it is most important though that we face the true problem at hand which is that our use of plastic bags are a liability to our environment, economy and even to our population…,” said Rassool adding that other small island states are already well ahead in sustainable waste management.

In fact being part of a regional NGO, SYAH-Seychelles is receiving assistance of neighbouring island states like Rodrigues that went plastic bag free in 2014 for world environment day and Mauritius which is going plastic bag free in January 2016 and the group is also hoping to inspire other members of the regional grouping such as Cape Verde, Comoros and Maldives to do the same.

“The project is pushing for a total ban but hopes to achieve public awareness and changing mindset in the interim as we push for a total ban. SYAH will be writing a policy brief to present to the Ministry of Environment with comparative studies on how other countries have implemented the ban
and results from our survey. We will continue the awareness campaign with movie screenings, donating educational materials to schools and ensuring the availability of reusable bags,” said Rassool.

Recognising the commendable effort of the group to sensitize the public the Seychelles Ministry of Environment, Climate Change and Energy has described it as a sign that other sectors of the society are willing to get involved in the cause.

According to Joubert, the ministry is also looking at new and innovative ways to encourage recycling, downcycling and energy extraction, especially through small entrepreneurs.

Proposals have already been made for the island nation to have a plastic waste treatment plant while continuing to look for more eco-friendly practices such as the introduction of biodegradable takeaway boxes.