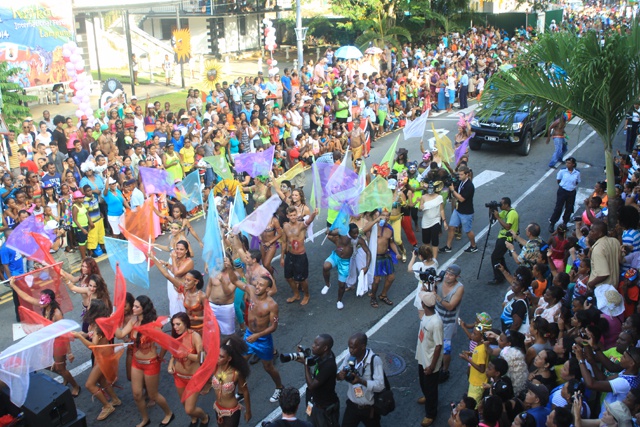 (Seychelles News Agency) - The 2014 Seychelles’ Carnaval International de Victoria defied roaring thunder and the flash of lighting that brought a heavy downpour of tropical rain, which had everybody groaning in frustration this Saturday April 26.

The gloomy skies cleared up giving way to a hot tropical sunshine just around the time scheduled for the Seychelles’ much awaited international gathering.

Visitors mingled with Seychellois and packed the sides of the streets of the capital to watch some 50 floats among which 26 from various countries worldwide as they parade in their extravagant and colourful costumes.

If anything, the visitors to Seychelles appeared to be enjoying themselves even more than the locals as they grasped every opportunity to have their photo taken with some parade participant or other. Those whose countries were represented in the parade cheered louder as their delegations went past, while others became emotional at what the event represented.

Catherine Polyakova from Russia and her mother planned their dream holiday in Seychelles so that they would be in the Indian Ocean islands for the carnival.

“We heard about the carnival from our friends and read about it on the internet so we wanted to be here to experience it. We arrived this morning. This is just so great, it is amazing,” she enthused.

Her friend Tanya Krasvic was more pensive in her reaction to the explosion of colour and sounds and said with much emotion.

“If only the world would stop and watch this. We really don’t have to fight. Why can’t everywhere all be like Seychelles, where people of all races join together in fun,” the teenager said.

German Ludwina Hiyke described the carnival as; ‘truly beautiful.” Ludwina who is on her first ever holiday in Seychelles could not decide which float she liked best.

"I guess I will be patriotic and say Dusseldorf, but they are all wow!”

Peter Gruber from Kent in England has followed Seychelles carnival since it started four years ago.
"Each year it gets better and the Seychellois are more beautiful every time. If I can I will come back every year, so you had better keep this carnival going Seychelles!”

Married to a Seychellois and living here for the past 15 years, Brigitte Jumeau kept the doors of her “Gift Corner” shop open throughout and gaily welcomed all who dropped in. she explained how she and her friends prayed hard for the rain to stop.

"We were all in unison, Christians, Muslim, Hindu alike. We wanted the rain to stop. We wanted our carnival to be a success and God answered our prayers,” she stated.

And indeed the 2014 Carnaval International de Victoria has been dubbed a success by the Seychelles Minister for Tourism and Culture Alain St Ange who is the brains behind the gathering of nations.

Speaking to journalists of the Seychelles Broadcasting Corporation just after the two hour parade had ended, he described this edition to be even better than last year.

“It’s our carnival, it’s for the Seychelles and we all need to work together to make it even better,” said St Ange.

After parading through the streets of the Capital of Victoria from Bois de Rose Avenue down Francis Rachel and Albert Street heading to Palm Street and then 5th June Avenue the participants of the carnival ended up at Freedom Square where the party continues.

Tomorrow is the big day for the children as they join carnival queen Lima Calbio from Trinidad and Tobago as she hosts the first ever Kiddies Carnival in the Seychelles.