It’s not a hoax! Immaculately ‘white’ black parrot spotted on the Seychelles island of Praslin 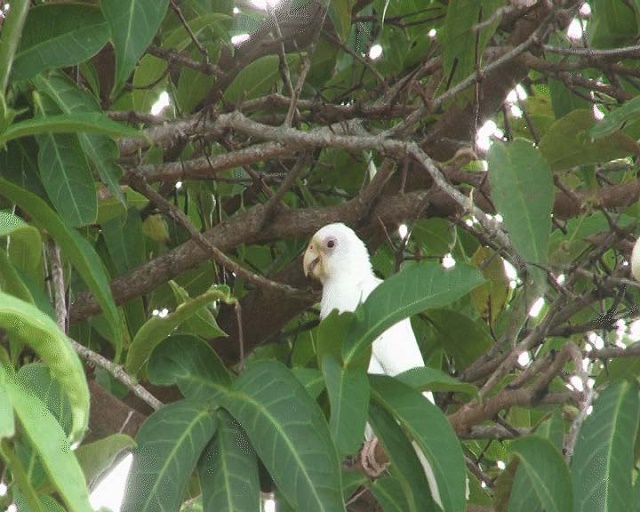 Perched high up on a fruit tree, the 'white' Black Parrot has caught the attention of residents on the Seychelles second most populated island of Praslin. (Seychelles News Agency)

(Seychelles News Agency) - Could there really be such a thing as a ‘white’ Black Parrot? That is the question that people on Praslin, the second most populated island of the Seychelles, are asking.

This follows the sighting in recent weeks of the unusual presence of a white bird with similar features to the Seychelles Black Parrot.

A photo of the bird was first posted on the social media platform of Facebook three weeks ago by a Praslin resident.

34-year-old Lindy Oreddy contacted SNA again this week after yet another sighting of the strange bird.

“This is the first time I have seen such a thing - a white black parrot!” said Oreddy, who lives at Baie Ste Anne, one of the two districts on the island, with its population of around 6,000 people.

“I saw the bird the first time over three weeks ago; it was on this electricity pole,” she added.

With its lush endemic palm forest, Praslin is the sole habitat for the endemic black parrot, the population of which is estimated to be between 500 to 900 birds.

In May last year, this national bird of the Indian Ocean island nation, was officially recognised as a distinct species, Coracopsis barklyi, by taxonomists of Birdlife International.

Despite its name, the unique and vulnerable species of the parrot family found only on this small island in the western Indian Ocean is of a more sombre colour, almost grey-brown.

A black parrot being white in colour was unheard of and indeed entirely unimagined until now.

Oreddy, who has become quite fascinated by the strange bird, approached several persons of interest on Praslin to share her discovery.

She told SNA that she had shared a photo she took of the white bird with Victorin Laboudallon, a well-known environmentalist on the island, as well as conservation officers working with the environment ministry.

“I gave them photos I had taken that morning [three weeks ago], but since then I had not seen it again, except on Monday this week,” said Oreddy.

“On Monday it was on a mango tree and then it came onto the Jamalac tree [fruit tree]; apparently it was with another black parrot which was feeding it at the same time.”

Oreddy is of the view that the presence of what she believes to be the ‘parent’ black parrot refutes any theories that this could be another type of bird aside from the black parrot, despite its unusual off-white colouring.

“Since Monday we have seen it every day, three or four times a day, at 7 in the morning and from 1 to 3 pm or from 4 to 6 in the afternoon. It acts like any other parrot, it eats, it whistles, if another one flies by it flies away with it,” explained Oreddy, who theorised that the bird may be an albino, particularly since the other bird which was feeding it was a normal dark-coloured black parrot.

A mysterious specimen of an endemic bird

Although the black parrot can be seen almost anywhere on Praslin Island, it is estimated that a larger number of these endemic birds live in the UNESCO World Heritage site of Vallée de Mai, where the coco de mer palm grows, providing the ideal natural breeding and nesting grounds for the Black Parrot.

Contacted by SNA, the public trust which manages the World Heritage site, the Seychelles Island Foundation, SIF claims that SIF had not seen the bird before “despite several seasons of intense Black Parrot monitoring during the breeding seasons.”

In an emailed response to SNA, the Chief Executive Officer of the SIF, Dr Frauke Fleischer Dogley said that more information about the species could only be provided after having analysed the bird, adding that SIF is undertaking close observations.

“Colour variants in parrots are possible - this is why we see yellow or blue ring-parakeets for example. They are parrots which have rare genetic alleles or mutations. Being white, in fact,doesn’t mean it is an albino - we would have to see more detailed photographs of or have the parrot in the hand to confirm this,” said Frauke-Dogley in the e-mail.

After this white version of the black parrot surfaced, the reaction on social media platforms such as Facebook has been mixed. While curiosity and amazement was expressed, there were also fears that it heralded new challenges to the health and survival of the much-loved endemic bird.

With its restricted flying range, small population size and limited natural habitat as well as the constant threat posed by introduced predators, the Black Parrot is classified as 'vulnerable' on the Red List of the International Union for Conservation of Nature (IUCN).

As a result, conservationists in Seychelles have been engaged in several efforts to protect the species, especially against one of the most serious threats, the potential migration of the ring-necked parakeet from the main island island of Mahé to Praslin as it could transmit diseases and compete for nesting and feeding sites with the Black Parrots.