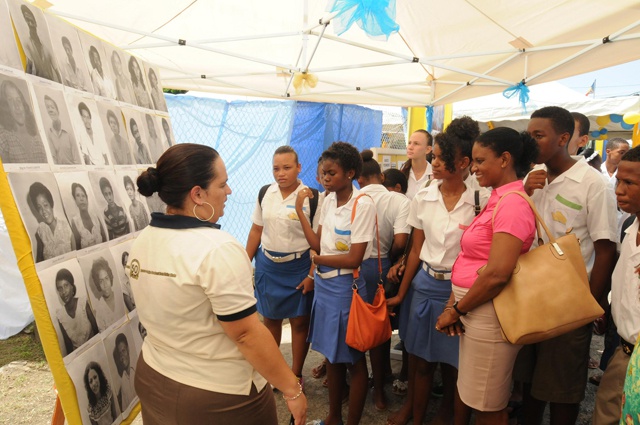 Although it normally stops broadcasting at 10 every evening, on Monday the AM (amplitude modulation) radio station extended its programme for an extra two hours until midnight for a special broadcast to celebrate the anniversary.

Back in 1965, Radio Seychelles started broadcasting for just two and a half hours each day - from 6pm to 8.30pm - and involved a few local announcements, music and the British Broadcasting Corporation (BBC)’s World Service news, relayed from London.

The occasion is currently being celebrated with a two-day exhibition at its studios at Union Vale, a northern suburb surrounding the Seychelles capital of Victoria. The exhibition consists of a collection of historic photographs as well as live programmes produced by some of its former radio hosts to demonstrate the evolution of radio broadcasting.

“We are targeting the younger generation, though gradually educational programmes are being brought in,” said Julienne.

The head of radio production, Jeanette Julienne, told SNA that thankfully, the technology had evolved since the early days, such as shifting from analogue to digital recorders and programmes from other broadcasters. Inserts from the BBC and Deutsche Welle are also no longer distributed on tapes, but downloaded comparatively quickly from websites.

One of the earliest radio announcers was Emmy Etienne, who started on a part-time basis while she was still a trainee teacher.

In an interview with SNA, Etienne recalls that she had started radio announcing when the broadcasts were initially aired from the premises of Cable & Wireless, the only telecommunications company present in Seychelles at the time.

“It was not much. We just played music, read a few official announcements and relayed the BBC  world news”, she said, adding that moving to Union Vale in its own premises meant that Radio Seychelles had to have its own transmitters and other equipment to operate independently.

This was set up and managed by a British man, Eric Passmore, who was also the station’s first engineer.

Radio Seychelles was subsequently set up as part of the Department of Tourism and Information and Etienne then joined as a full time staff member.

Known for her very clear and fine voice, she was sent on a six-month training course with the BBC and on her return, she also became a news reader.

Etienne also started a ‘Listeners Choice’ programme, which received hundreds of requests and had to be extended to a twice-weekly schedule.  She also told SNA that country and western artists, notably Buck Owens, Merle Haggard and Connie Smith, were very popular in those days and constituted a fair share of the songs requested.

Soon after being set up at Union Vale, Radio Seychelles also began to present local news bulletins in English and Creole, besides relaying the BBC World Service news.

Two British volunteers arrived from UK and one of them, Michael Shields, joined Etienne in launching a weekly children’s programme.

“We travelled on Mike’s scooter all over Mahe, stopping at the schools to record children’s songs,” she recalled.

Another Radio Seychelles pioneer, Dawson Sinon, who served for 42 years before retiring in 2012, told SNA that he was Seychelles’ first radio technician.

Sinon told SNA  that the first outside broadcasts were done for a National Show at Gordon Square (now known as Freedom Square) in 1968 and subsequently the arrival of the first passenger jet, a British Overseas Airways Corporation (BOAC) plane in 1971. The then Chief Minister James Mancham, who would go on to become Seychelles’ founding president upon independence from Britain in 1976, was among the passengers on this historic flight.

Another popular weekly programme was by ‘l’Alliance Francaise’, presented by Marlene Lionnet, who later became a part-time announcer and Dr Hilda Stevenson Delhomme, who was also Seychelles’ first female politician. That too featured a choice of listeners’ favourites, solely in the French language.

Other notable Radio Seychelles veterans include Antonio Beaudoin and Gilbert Confait, both of whom have since passed away. Beaudoin had a booming voice and was well-known for his commentaries of national events.

Confait is fondly remembered for encouraging many of Seychelles’ best known artists, such as Patrick Victor, Jean Ally, John Wirtz, Despily William and David Philoe to compose Creole songs, which were then aired on the radio.

This was also done by the late Douglas Cedras, who started in 1969 as a technician and soon had his own programmes, such as ‘Top of the Pops’.

Confait and another long-serving producer-presenter Marjorie Baker, who is also deceased, launched the ‘Allo les Iles’ (Hello to the islands) programme on Sunday, for the benefit of residents living away from the main island of Mahe.

The advent of television - in the 80s

Another remarkable radio Seychelles figure has been Ibrahim Afif, who started as a part-time announcer in 1975 and a few years later as Head of Radio News, initiated the inter-school press review and several other educational programmes.

On January 1, 1983, eighteen years after Radio Seychelles began and over four decades after television was first introduced in Britain, public television was launched in the 115-island archipelago, with Radio Television Seychelles (RTS) broadcasting from its Hermitage studios on Fridays, Saturdays and Sundays, which eventually was transformed into the Seychelles Broadcasting Corporation (SBC) in 1992.

Afif was then appointed as the Chief Executive Officer of the SBC, a post he was to occupy for 19 years until 2009, when Antoine Onezime took over the position.

Radio Seychelles was later joined on the radio scene by its sister SBC FM radio station Paradise FM in 1997 and privately-owned Pure FM in 2013, all of which are mainly entertainment-oriented.

From its humble beginnings, the SBC presently has a staff of 250, 50 of whom work for the radio service.

Julienne says the Union Vale premises is becoming run down, showed SNA numerous cracks in the walls, and it will not be long until this building empties its hallways.

Many of the radio station’s producers and presenters have moved over the Hermitage studio ahead of the station’s planned move to join their colleagues under one roof.

However, Union Vale will still be an important place for the SBC - just not precisely in the same place. Plans are afoot to build a modern new Broadcast House across the road from the current Radio Seychelles studio which will house all of SBC’s radio and television operations.