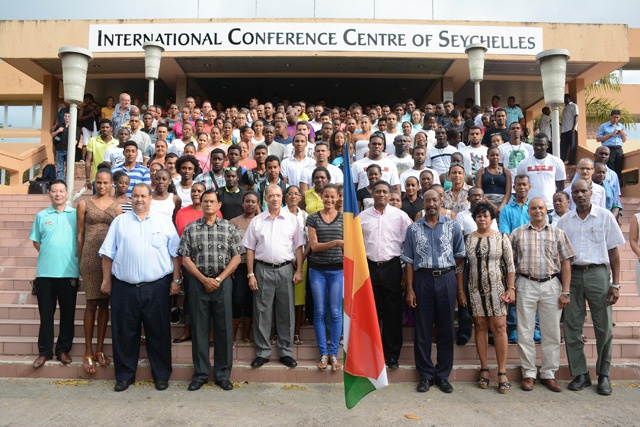 Team Seychelles gathered on the steps of the International Convention Centre of Seychelles with the President of Seychelles, James Michel (Patrick Joubert, Seychelles News Agency)

(Seychelles News Agency) - Representatives from 14 sporting disciplines in Seychelles are preparing themselves to jet off to the neighbouring Indian Ocean island of Réunion with one goal in mind: bringing home some gold.

A small first group of athletes and officials have already left the country this morning, waiting for the bulk of the delegation which will arrive next Thursday for the start of the Indian Ocean Island Games (IOIG), which will be held from August 1 to 9.

Air Seychelles will be laying on a special flight for the rest of Team Seychelles, which departs on August 3 for the French department of Réunion.

The games are hosted every four years among athletes from Indian Ocean islands, including Mauritius, Seychelles, Comoros, Madagascar, Mayotte, Réunion and the Maldives.

First started in 1976, Seychelles was the previous host of the games and will be seeking to repeat their last success seen on home territory when they won 123 medals - including an unbeaten 57 gold medals - in 2011.

The entire delegation was brought together on Thursday afternoon at the International Convention Centre of Seychelles (ICCS) for an official send-off, hosted by Seychelles Minister of Social Affairs, Community Development and Sports, Vincent Meriton and attended by the Seychelles President James Michel.

The official kit for the games was handed over to the athletes, in the red, white, blue, yellow and green colours of the Seychelles national flag.

"The Seychellois athletes must have the will to win," said Meriton in his speech at the ceremony, where President Michel handed over the country’s flag to Lisa Labiche, Seychelles’ high jump star in the absence of the national Sportsman of the Year, Andrique Allisop.

Allisop was chosen to be the flag-bearer for this year’s IOIG, but had not yet returned from his training camp in France in time for the ceremony.

A lot has been done to prepare the Seychelles team for that, with training camps in France or South Africa and even professional coaches coming into the country to train our national selections, with around 25 million Seychelles rupees (around $1.9 million) budgeted for the team’s preparations and participation.

To motivate the athletes to achieve good results, Minister Meriton announced an increase bonuses for medalists.

Those of the 115-island archipelago’s 90,000 population who wish to follow the games and cheer for their countrymen and women should not miss much of the games since the national television broadcaster, Seychelles Broadcasting Corporation (SBC) should broadcast the entire competition.

However, despite this, a small but determined number of Seychellois have decided to make the trip to Réunion to support their team and the country in general.

43-year-old Alda Azemia of Port Glaud, a district on the western coast of Mahe, the main island of the Seychelles decided to make the trip to the meeting to provide support for three members of her family who are athletes.

“Even though the Réunion crowd will be bigger, I will be there for Seychelles, my presence, support and Seychelles flag will be waving up high all along,” she told SNA.

“It’s all about the experience.... our presence will help the athletes to do their best and go for gold,” she said.

“A group of us came up with an idea to print t-shirts that will make it hard not to notice us Seychellois in the stands. I will not be alone I am sure, we are going to make a lot of noise while cheering for the Seychellois team,” she told SNA.

The excitement about the games has not yet caught on in Seychelles, but once back in the thick of it, the memories and pride of Seychelles’ success in 2011 should come flooding back.

Some of the people interviewed by SNA believe that Seychelles will not do as well as last time, simply because they will not have the advantage of the home crowd.

“Seychelles’ performance will not be able to match that of the 2011 game, simply because they will not have the mass support again,” said 47-year-old Marina Souffe of Sans Soucis. “Perhaps the female volleyball will retain its gold medal.”

“I don’t feel any ambiance, it’s like they are treating the games like any local match,” complained 26-year-old Angelique Jean of Anse Boileau, from the western coast of Mahe. “I am not even seeing Seychelles retaining its number of gold medals from the last game. Our strongest chance of getting gold medals is in athletics.”

Things are already looking difficult for the Seychelles national football team, who will make their first appearance on July 31 against Madagascar.