The return of the sweet potato - can agricultural experts turn it into a cash crop for Seychelles farmers? 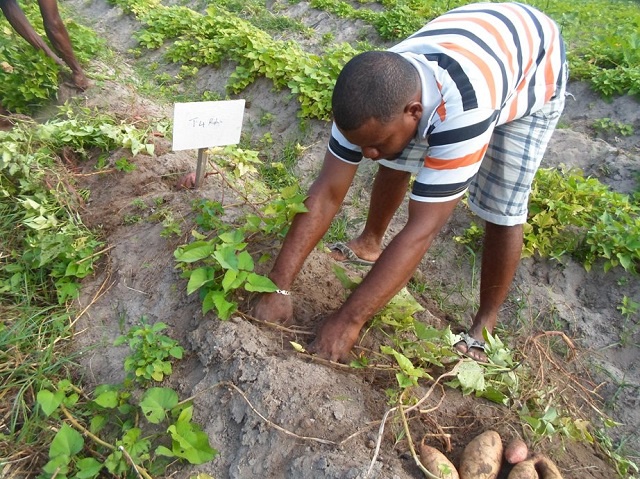 Under the relentless heat of the tropical Seychelles sun, Francois Dugasse, a farmer living in the mountainous area of Grand Fond on Praslin Island, the second most populated island of the Seychelles, straightens from his digging work as the humming of a vehicle signals the arrival of visitors.

“Not bad for a small patch of land. I have people waiting in tow to buy this lot!” he grins to the visitors from the Seychelles Agricultural Agency while pointing at a green patch of vine-like shrubs, clinging close to the ground.

The patch has five rows measuring four meters long, divided in the middle by white signs with inscriptions on them.

Since early March, the visitors from the research section of the Seychelles Agricultural Agency have planted five varieties of sweet potatoes on this patch of Dugasse’s farm, which is several hectares in size.

This is part of a four-year trial on Praslin as part of the Agency’s programme to propagate the different types of sweet potatoes in the populated islands of the archipelago and encourage farmers to grow more of this tuberous root.

Sweet potato was traditionally one of the main staple foods of the Seychelles but as the population increased over the years to reach its present level of over 90,000, the agricultural sector has given way to importation, resulting in a considerable decline in consumption of locally-grown food.

A sweet potato pudding however still features among the highlights of the Indian Ocean archipelago’s Creole cuisine, but this sweet and starchy root crop can also be boiled, grilled, steamed, pureed or baked.

A scientific approach to farming

Competing with the likes of cassava, yam and maize, the humble sweet potato has not taken off as a cash crop in Seychelles.

In 2013, statistics obtained by the Seychelles Agricultural Agency (SAA) revealed that out of 650 hectares of registered agricultural land in Seychelles, only seven hectares were allocated to the cultivation of sweet potato.

“Most farmers cultivate cassava because you get more from a cutting. It does not take much space and can be planted anywhere,” said Dugasse, who has been farming for more than 20 years.

Moreover, Dugasse points out the low prices of sweet potatoes around half the price of cassava per kilogram.

However, Sandra Sinon, an assistant research officer from the Seychelles Agricultural Agency, has reason to think differently about the sweet potato.

“We have seen that sweet potatoes grow well in Seychelles. It prefers red soil but some types also do well in sandy soil,” Sinon told SNA.

Since 2011, Sinon and her colleagues have spearheaded several trials on the island of more than 6,000 people, involving this root crop and exposing them to different types of soil available on the island at different times of the year.

After each harvest the swollen edible roots were weighed and measured and the data collected were compiled for comparison in yields.

“Some years, depending on the weather, our yields were great while on others we were not so lucky but these also help to prove that in spite of changes in climate, this food crop can be a great supplier of food and can be used as alternatives,” Sinon explained, adding that she hopes to present her findings to farmers later this year.

For these scientific trials, only five out of a range of different varieties of sweet potato were chosen, each with different colours and shapes.

Some of these were already successfully introduced and cultivated on large scale basis on agricultural areas such as Val d’Endor, a southern district of Mahe, the main island of Seychelles.

“In the long run, we want all farmers to diversify their crops, not only concentrate on fruits or vegetables but also on root crops. Cassava is good, but why not sweet potatoes too? The more varieties we are providing the better for the consumers,” said Sinon, highlighting the need for the agricultural sector to play a more versatile role in food security of the remote and vulnerable Indian Ocean archipelago.

Easy to grow from cuttings and without the use of fertilisers, the return of sweet potato on the local market could also increase local consumption.

This jam-packed nutritional root crop is a good source of different vitamins and contains a high concentration of iron and potassium.